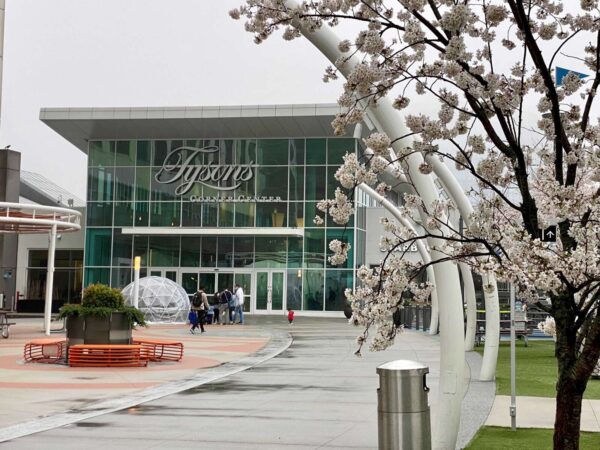 (Updated at 2:40 p.m.) Despite the uncertainty introduced by the COVID-19 pandemic, Tysons Corner Center has welcomed several new retailers in recent months, and a handful of newcomers are slated to move in within the foreseeable future, the shopping mall announced last Friday (June 4).

Tysons Corner Center Senior Marketing Manager Todd Putt says the mall has seen a “large volume of shoppers returning” as the pandemic has started to recede in Fairfax County.

“Clearly, shoppers are ready to move past the pandemic and we are seeing shoppers from across all age demographics,” Putt said in a statement to Tysons Reporter. “After being forced to stay close to home, individuals are looking for better experiences and services when they shop. Specialty retail brands are eager to get back on track launching their concepts and we are excited to be a partner to make that happen.”

Tenants waiting in the wings include Chopathi India Kitchen — a fast-casual Indian restaurant that currently has locations in Dulles Town Center, Ashburn, and Hanover, Maryland — and Fantasticks, which makes custom gelato bars and pops. This will be the artisan gelato shop’s third location, coupled with one in Gaithersburg and a pop-up at One Loudoun in Ashburn.

The mall also confirmed that Lucid Motors is still set to open a studio on site. The electric car company announced in July 2020 that it will move into Tysons Corner Center as part of plans to expand with 20 new studios and service centers in North America by the end of this year.

Lucid is also planning to bring a store and service center to Tysons Galleria, but its special exception application for that location is not scheduled to go before the Fairfax County Planning Commission until Oct. 20.

The clothing retailer Primark announced on April 28 that it will make its entry into Virginia with a two-story, 37,100 square-foot store at Tysons Corner Center. The London-based fast fashion company has opened 12 stores in the U.S. since September 2015 and anticipates launching in Tysons sometime between September 2023 and September 2024.

The final announced upcoming retailer is Fabletics, which sells sportswear, footwear, and “athleisure” accessories. The company primarily operates online selling subscription memberships, but it also has over 50 brick-and-mortar stores and plans to bring that number up to 74 stores in 2021.

Psycho Bunny — a New York City menswear brand known for sophisticated styles that stand apart from the rest, with an unconventional logo, unexpected detailing and expressive pops of color that together offer an escape from ordinary.

Therabody — World-leading percussive therapy massage devices. Everybody experiences soreness, tension, or tightness — whether it’s from sitting at a desk, working out, or just living life. Therabody’s products make it easier than ever to feel better on your schedule and on your terms.

Diesel — Known for its long and storied history of strong, ironic, and playful campaigns, the Italian retail brand reopened in its new location on Level 2 of the mall and sells denim, clothing, footwear, and accessories.

Roll by Goodyear — a popular pop-up concept by Goodyear that says goodbye to garages and waiting rooms and brings tires to you.

Ardene — a family-owned Canadian value fashion retailer based in Montreal, Quebec. Founded in 1982, Ardene started as an accessories and jewelry retailer, and has since added clothing, shoes, brand collaborations, and licensed apparel into its product mix.

3DEN — Flexible urban amenity spaces and work lounges. 3DEN Tysons Corner has cozy nooks everywhere, space to work, space to lounge, plus free coffee and lightning-fast WiFi. Guests only need the 3DEN app and to access the lounge for just $5 an hour or $99 a month for unlimited access.

The pandemic has hit shopping malls hard over the past year, with The Washington Post reporting in April that nearly 200 department stores have closed and another 800 locations are projected to follow suit by the end of 2025.

According to Retail Dive, the pandemic accelerated a shift toward online shopping, and the retail industry saw a significant decline in foot traffic throughout 2020, though numbers started to improve in June as states like Virginia started to ease public health restrictions.

Tysons Corner Center never entirely shut down, instead reducing operating hours and intensifying cleaning protocols. The mall has been fully open since May 19, 2020.