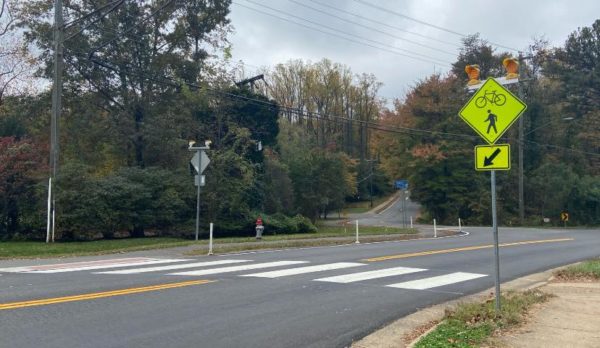 Flashing beacons have been installed at the Washington & Old Dominion Trail crossing on Shreve Road in Falls Church, offering a glimmer of hope that bigger changes are coming to a road that has been plagued by safety and traffic issues for years.

The new beacons are temporary, intended as a “second warning” after drivers pass permanent warning beacons that can be found several hundred feed prior to the crossing, according to VDOT spokesperson Kathleen Leonard.

Operational around the clock, the temporary flashing beacons were installed to quickly address concerns about bicycle and pedestrian safety on Shreve Road. Community members have been particularly adamant about the need for improvements since a female pedestrian was killed in a crash in August 2019.

“This is a positive safety development for pedestrians, cyclists and motorists accessing the Shreve Road corridor,” Providence District Supervisor Dalia Palchik said. “The flashing light will improve visibility and operate on solar and battery power.”

Palchik also announced on Wednesday that a more substantial change for Shreve Road is closer to fruition with the Commonwealth Transportation Board’s approval of a Safe Routes to School grant for Fairfax County’s proposed Shrevewood Elementary School project.

With the Safe Routes to School grant, the Fairfax County Department of Transportation plans to add three new marked crosswalks:

Each crosswalk will include connections to existing sidewalks and paths, signs, markings, and curb ramps and extensions.

According to FCDOT, Shreve Road currently has no marked crosswalks for over half a mile that provide access to the school from northern neighborhoods and the W&OD Trail, despite an abundance of pedestrian and bike facilities along the road and many nearby streets.

The Shrevewood project was driven by the community and has gotten support from the school’s parent-teacher association and principal as well as the Falls Hill Civic Association and other homeowners’ and civic associations, according to FCDOT communications head Robin Geiger.

Geiger says the project has not been developed enough for a timeline to be established.

By improving safety, Safe Routes to School aims to encourage students to exercise instead of taking cars to school. About 30 percent of Fairfax County’s elementary and middle schools take part in the program.

VDOT is currently exploring additional safety improvements along Shreve Road through its Shreve Road Corridor Study, which launched earlier this year after months of advocacy by the Shreve Road Community Working Group.

With the National Park Service considering improvements to the W&OD crossing, VDOT’s study team is refining its recommendations based on public input after presenting them at a virtual public meeting on Oct. 7.

“At this time the study does not set construction dates for any of the alternatives,” Leonard said. “The purpose of this study is to develop proposed improvements that localities can pursue for funding, and to consider including in their comprehensive plans.”