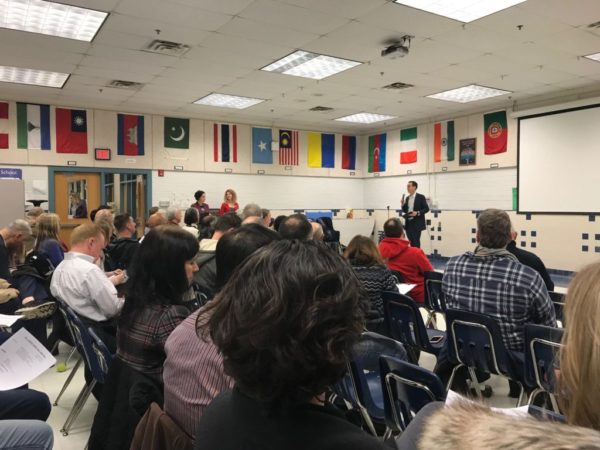 The road, which runs through the City of Falls Church and Fairfax County, has been the focus of a push for improved safety from the Shreve Road Community Working Group, a coalition of residents and community associations advocating for improvements to the corridor, along with elected officials and residents.

“What brought us here originally is the terrible tragedy,” Jeremy Hancock, the co-founder of the Shreve Road Community Working Group, said at the meeting, referring to the Falls Church resident who died from a hit and run near the intersection of Shreve Road and Hickory Street.

Hancock said that 140 people submitted feedback about the road in a survey and that the group is pushing for changes to both specific things, like crosswalks for the school, and also address systemic issues, like speed.

“We have heard for a long time the concerns along Shreve Road,” Hancock told Tysons Reporter. “Our greatest impact is getting the community together.”

Here are some of the things locals can expect, according to Simon and Allison Richter, the liaison to Fairfax and Arlington counties for VDOT:

“At the end of the day, there was good reason to decrease the speed limit on that portion, but traffic engineers found other speed limit was adequate,” Richter said about the recent speed study.

New signs with the new speed limit will be up soon, she said.

Even with the speed reduction in the one area, several attendees in the audience voiced concern that the speed is too high and dangerous.

“Speed is a big factor to results of a crash,” one person said.

“We want to make sure we don’t artificially lower the speed limits,” Richter responded to attendees’ comments. “People drive the speed they want to drive and then it becomes a burden on the police department.”

An attendee who claimed to be a former police officer with Fairfax County said that drivers can often go up to 10 mph above the posted speed limit without fear of getting a ticket. The police representatives at the meeting declined to comment on the attendee’s comment.

In response to concerns about the sharp turn on Shreve Road near Oldewood Drive, Richter said, “If we straighten the curves and widen the lanes, it encourages speed.”

Simon mentioned that there are bigger projects proposed for the road that require grant funding.

“Let us get all of this implemented plus give it a little bit of time and see how traffic adjusts,” Richter told the attendees. “And if we’re still having a lot of issues, we can continue to talk.”

Bonnie Kartzman, the co-founder of the Shreve Road Community Working Group, said that community involvement with sending letters to elected officials and attending meetings help the cause.

Kartzman urged attendees to sign up for the working group’s email newsletter and volunteer.