The Virginia Department of Transportation (VDOT) unveiled suggestions for ways to address speeding and safety concerns on Shreve Road in Falls Church during a virtual public information meeting on Oct. 7.

Led by VDOT and the consulting firm Kittelson & Associates, the Shreve Road Corridor Study team emphasized that its goal is to give the City of Falls Church and Fairfax County options to consider, not to make decisions on funding or construction.

“This is a planning-level study,” VDOT transportation planning manager Amir Shahpar said. “The purpose of this study is to develop proposed improvements for localities to apply for funding for some or all of the recommendations.”

VDOT launched the Shreve Road Corridor Study on Mar. 25 in response to the advocacy efforts of the Shreve Road Community Working Group, which formed after a woman was killed in a hit and run at the intersection with Hickory Street in August 2019.

The study focuses on the two-mile section of Shreve that connects Route 29 with Route 7. That stretch averages up to 10,000 vehicles a day, according to VDOT, raising concerns about traffic speed and pedestrian and bicycle safety in the surrounding neighborhoods.

To address the Hickory Curve, the study team proposed adding optical speed bars, enhanced signage, and other means of slowing traffic ahead of the curve; moving the pedestrian pathway; clearing vegetation to improve visibility; or creating a barrier curb and gutter.

VDOT also considered installing additional guardrails to shield pedestrians from motorists but found that they are “not warranted” for that particular location, Kittelson engineering associate Amelia Martin says.

Options for improvements outside Shrevewood Elementary include building roundabouts or removing the street median, but the area’s topography, the presence of utilities, and other factors would make those complicated undertakings. 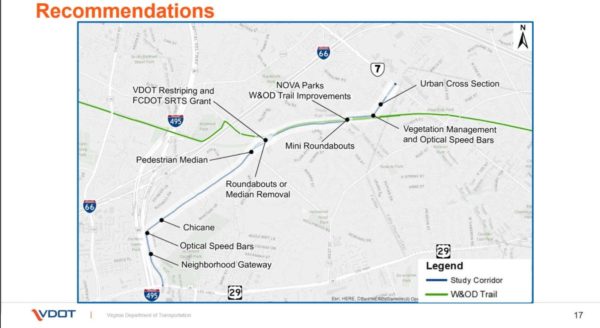 Recommendations for other areas along the corridor include:

Shahpar says his team looked at the possibility of bike lanes along Shreve Road, but those would require major capital improvements, since many areas are currently too narrow. They also believe most cyclists would prefer to stay on the Washington & Old Dominion Trail, which runs parallel to Shreve north of the elementary school.

VDOT will continue developing its recommendations throughout October and plans to release a final report by late November.

Shreve Road Community Working Group co-founder Jeremy Hancock says he finds it encouraging that VDOT is working with residents and local officials to create a comprehensive plan for improving the Shreve corridor, but he worries about the time it will take to implement some of the proposals.

“We can’t lose sight of the need to address safety now,” said Hancock, who also represents Providence District on Fairfax County’s Transportation Advisory Commission. “VDOT hasn’t fully addressed the feasibility of plans that should be done in the meantime.”

Community members can give feedback on the study until Oct. 19 by mailing VDOT’s Northern Virginia office, emailing [email protected], or filling out an online survey.

“I think we have some good options, but we know funding is going to be a challenge,” Providence District Supervisor Dalia Palchik said. “So, [the more] input we receive from the community, I think the better we will be able to work with the state to prioritize the recommendations for the short-term and the long-term improvements.”