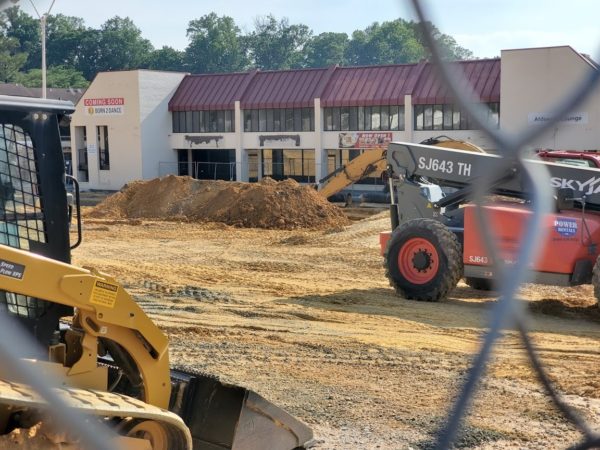 Mexican restaurant El Sol is currently under construction after recently opening in Vienna.

El Sol has two locations, one in D.C. and one in Vienna’s Cedar Park Shopping Center. The restaurant is working on renovations and — as of a few months ago — was aiming to finish construction by the end of the summer or early fall of this year, according to Natalie Monkou, Vienna’s economic development director.

“I have been in three locally-owned restaurants over there, and it is really bad for all,” said James, emphasizing the importance of supporting El Sol during the construction.

The Cedar Lane Bridge construction is scheduled to last from May through November, according to James.

El Sol has been serving Mexican cuisine since 2014. Chef Alfredo Solis and his sister Jessica opened up the restaurant together and serve Mexico City staples such as huaraches, tortas, and tacos, according to the restaurant’s website.

Another restaurant in the shopping center that is experiencing business trouble due to the construction is Crepes & Karak Cafe. The restaurant sells crepes, salads, coffee, smoothies and more.

“They have a nice social distance going on between their tables,” said James on the Vienna VA Business News Facebook group.

James encouraged Vienna residents to continue to support these businesses during the pandemic and the construction. 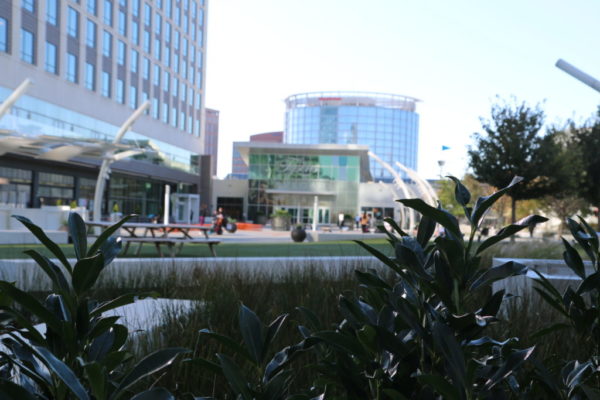 Shoppers can now get curbside pick-up from certain stores at Tysons Corner Center.

The mall’s website says that the retail to-go option is available for select retailers and restaurants.

“Contact the store directly to find out merchandise availability, payment options, and to place an order,” the mall’s website says. “Stores with exterior entrances may have their own curbside pickup locations.”

Currently, people can find curbside pick-up at the entrances between Macy’s and Pottery Barn, next to Coastal Flats and valet and between California Pizza Kitchen and Panera.

Nearby Tysons Galleria rolled out its curbside pick-up earlier this week.

Tysons Corner Center recently announced that it fully reopened to shoppers. The mall is open from 11 a.m.-7 p.m. Monday-Saturday and noon-6 p.m. on Sundays.

In addition to the retail to-go, Tysons Corner Center also has a list of its restaurants that are offering delivery and take-out and a list of nearly two dozen stores allowing in-person shopping.

“We continue to promote a healthy shopping environment for our guests and employees through intensified cleaning procedures and proper social distancing signs,” according to the mall’s website.

Pike 7 Plaza in Tysons and Idylwood Plaza and Tysons Station in the Falls Church area will soon have a contact-less pick-up program for their restaurants.

Federal Realty’s Pick-Up program launches next Friday, May 15 in the D.C. area, to allow curbside pick-up for eateries at its properties, according to a press release from Mittie Rooney at the Axiom Communications Group.

“The program is made available to all tenants and customers looking for comfortable ways to return to shopping at their favorite stores,” the press release said. “Customers will be able to place orders directly with stores by phone or on-line, and arrange for same day pick-up, or a time most convenient to them.”

Federal Realty’s three shopping centers in the Tysons area will have the program by the end of the month, Rooney  said.

“We see this as a long-term solution to finding even more convenient ways for customers to shop,” Stuart Biel, the senior vice president of regional leasing for Federal Realty, said in the press release. 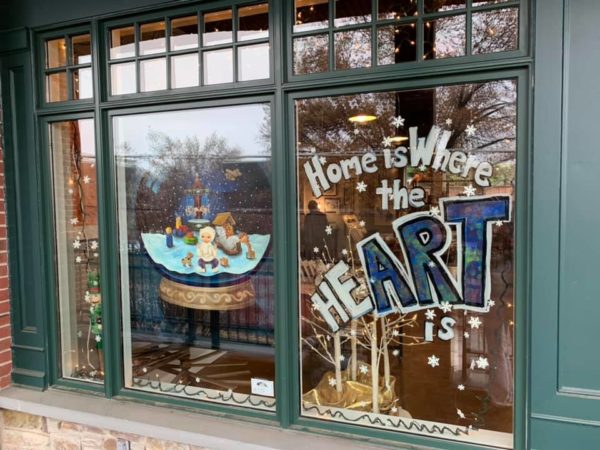 For people who haven’t purchased holiday gifts for friends, family or loved ones yet, they’ve still got a chance with several holiday markets and malls around the Tysons area.

The Vienna Arts Society’s Holiday Pop-up Art Market (101 NW Church Street) will stay open until this Sunday (Dec. 22). The collection offers shoppers items from hundreds of artists, according to the website, including jewelry, multimedia art, clothing, accessories and more.

Tysons Corner Center and Tysons Galleria both have extended hours of operation during the coming days but both locations will be closed on Christmas (Dec. 25).

For those who cannot get enough of handmade and local items, The Creative Collective POPUP  in Tysons Corner Center, adjacent to BrandBox on level one, carries items from roughly 20 artisans, authors and designers. Examples of gifts found in the shops are handcrafted leather accessories, bathrobes, jewelry and storybooks.

The pop-up will remain open until Christmas Eve during mall hours. Visitors even have the chance to speak with the artists themselves.

The events will feature live music, food, drinks and craft vendors from around NoVA. 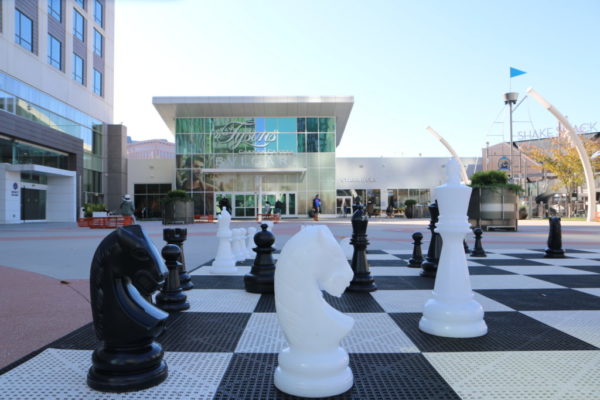 Today is Cyber Monday — a growing shopping day for people looking to score deals during the holiday season.

Of the holiday shopping days, let Tysons Reporter know which one you took the most advantage of.

(Updated 10/24/19) A Mediterranean restaurant and dumpling eatery are some of the newcomers headed to Falls Plaza in the the City of Falls Church — and they are hiring.

Tasty Dumpling and Plaka Grill have “now hiring” signs in their windows at the shopping center at 1200 W. Broad Street.

Plaka Grill, a locally-owned Greek restaurant, is relocating its Falls Church location from 513 W. Broad Street to Falls Plaza. The restaurant also has a spot in Vienna.

“With the move to the new location in Falls Plaza, the restaurant will be expanding its footprint with additional kitchen space that will allow the restaurant to expand its catering offerings,” according to a press release from the restaurant.

The restaurant is planning to open in November, the press release said.

“We’re thrilled to move to a location with abundant parking to better serve our customers,” Peter Drosos, the restaurant’s owner and chef, said in the press release. “Falls Plaza is ideally situated, and we’re excited for the opportunity to be more accessible to our guests whether they’re choosing to dine in with us or get carry-out, delivery or catering.”

Sandwich chain Jersey Mike’s and Rania’s Love Vegetarian Restaurant also have signs saying they are coming to the shopping center.

A spokesperson for Jersey Mike’s said that the eatery is aiming for a December opening.

The shopping center near Walmart is finally starting to come together.

According to a contractor working at the scene, construction on the initial buildings of Tysons West Phase III is expected to wrap up within the next month or so.

There are four buildings under construction between the Walmart and Leesburg Pike just west of the Spring Hill Metro station.

In contrast to the towering heights planned to the east, the offerings at Tysons West Phase III are more typical of strip malls like the Pike 7 Plaza a few blocks south. The new shopping is set to include a Smoothie King, Jersey Mike’s, COX and Dunkin’ Donuts.

The contractor said construction at the retail buildings closest to the Walmart was going to be the soonest to open, while the two closer to Leesburg Pike will open later.

The opening is slightly later than the spring opening. 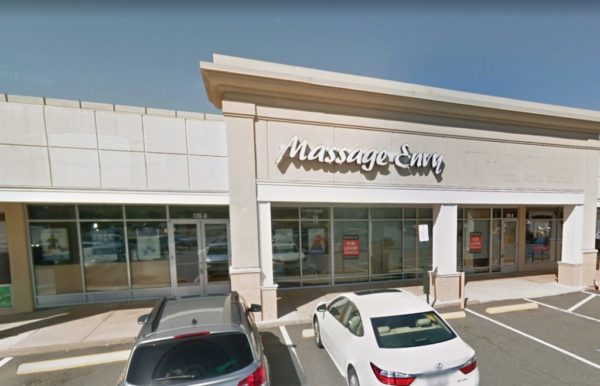 Korean eatery Chi Mc might be coming to a shopping center in Vienna.

A retail license permit from last Wednesday (June 5) indicates that the eatery is looking to serve wine and beer at a spot in the Danor Plaza (126 Branch Road SE).

Jon Weiss, the vice president of leasing for Rosenthal Properties, said that he could not confirm a new tenant for the space, which the Rosenthal site lists as vacant, because a lease has not been signed yet.

Chi Mc, which means “chicken and beer” in Korean, currently has locations in Annandale, Alexandria and Chantilly, according to its website.

FCPD released a video yesterday (Tuesday) to dispute online claims that a teenage girl was “body slammed” during an arrest in Tysons Corner Center last Thursday (April 25.) Police Chief Edwin C. Roessler Jr. directed the Internal Affairs Bureau to review the incident, according to the press release, and said the Police Auditor will conduct an independent review.

The video shows a man pulling a woman into a store while holding her hands behind her back. After what appears to be a struggle, she then falls to the ground.

Police say during the incident a 19-year-old woman “threw down her water bottle and dumped her drink all over the store’s floor and walked away” after her 22-year-old friend was caught shoplifting and issued a summons.

Police say the 19-year-old “began screaming and acting disorderly” when police approached her, and that she attempted to break free from police after being brought back into the store.

“To gain control and prevent her from harming herself or others, she was taken to the ground by the arresting officer and finally handcuffed,” noted the police report last week.

Police issued the 19-year-old a summons for disorderly conduct and obstruction of justice, and mall management banned her from Tysons Corner Center for one year, according to the report.

A 27-year-old Fairfax man was also arrested for disorderly conduct after he “aggressively approached officers, cursing at them and attempting to interfere with their investigation,” the report says.

A sign by the entrance says that the handbag and luggage store will close on Friday (April 26) and encourages shoppers to visit its other locations at the Fair Oaks and Westfield Montgomery malls.

The imminent closure is the latest of a few ones this spring at the mall.

After filing for bankruptcy in February, women’s clothing chain Charlotte Russe had steep sales throughout March before closing up shop. Currently, the sizeable space on the second level by Barnes and Noble is vacant.

Gymboree shuttered more than 800 stores, including its location on the first floor of Tysons Corner Center, after filing for bankruptcy in January. The children’s clothing retailer, which was in business for 43 years, plans to sell its Janie and Jack brand, according to news reports. (The Janie and Jack store is still open on the second level.)

Gymboree’s last day of business was last Saturday, April 20, according to its Facebook page for the Tysons Corner Center location.

Home goods and decor store Dietch’ left its spot on March 31 after opening in the mall in August.

“We couldn’t afford the rent anymore and the business wasn’t as good as expected,” an employee at Dietch’ wrote in response to Tysons Reporter’s inquiries on the closure.

While the mall hasn’t announced new tenants for the vacancies yet, several newcomers are slated to arrive soon elsewhere in the mall, including 7-Eleven, an Italian legwear store, Morphe Cosmetics and a bubble tea shop. Recently, All Star Sports, shorts chain Chubbies and Bubbles opened.