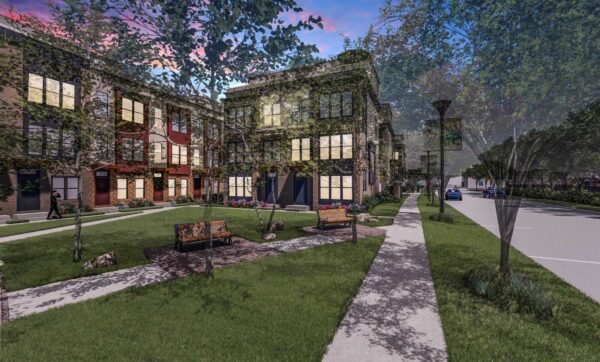 More townhouses are coming to Falls Church, this time at Graham Park Plaza on Arlington Boulevard.

Ownership of the Giant-anchored shopping center is now split between two developers after EYA announced last week that it had closed on the purchase of 8.3 acres from property manager Federal Realty, which still owns 10.3 acres.

The sale represents the latest step in a years-long effort to redevelop Graham Park Plaza into more of a mixed-use neighborhood, though the current plans are more limited than what Fairfax County had previously approved back in 2016.

EYA will build up to 177 townhomes on the western portion of the shopping center and has committed to providing a public park and some infrastructure improvements, including a new street grid to connect the residential and commercial parts of the site, five-foot wide sidewalks, a 10-foot wide shared-use path, and bicycle facilities.

EYA Executive Vice President of Acquisition and Development Evan Goldman says the plaza’s proximity to “major Northern Virginia job centers like Tysons and [the] Mosaic” District make it an ideal location for the planned residential development.

“We are providing housing at attainable prices in an area that has not seen much development,” Goldman said. “Working with a fantastic partner such as Federal, which is reinventing the shopping center, will make this a truly walkable mixed-use neighborhood.”

The Fairfax County Board of Supervisors and planning commission approved EYA’s proposal in October.

Federal Realty won approval from the county in December 2016 for a more intensive mixed-use development with 248 multifamily housing units, but it later downsized its plans before moving to sell part of Graham Park Plaza to EYA last year, according to The Annandale Blog.

EYA, which is also collaborating with the City of Falls Church and Metro on developments in the West Falls Church area, says the new townhouses at Graham Park Plaza will be priced starting in the $600,000s. 12.5% of the units will be categorized as affordable housing.

The developer anticipates breaking ground on the project sometime this spring.

“EYA and Federal Realty are bringing new investment to a corner of the county which has not seen much development in the last two decades,” Mason District Supervisor Penelope Gross said in a statement. “This will be a catalyst for further redevelopment and revitalization up and down the Route 50 corridor.”