Fairfax County will provide an extra $160,000 to help the Town of Vienna kick off a stream restoration project.

The county’s Board of Supervisors unanimously voted to approve the additional funding at their meeting on Tuesday.

The extra funds will go toward the design and construction of the Northside Park Piney Branch Stream Restoration Project.

Located in the Town of Vienna and the Difficult Run Watershed, the project will restore roughly 1,400 linear feet of the stream on Piney Branch by improving the water quality and providing more nutrients, according to county documents.

“The town will administer the design and construction of the Project. Partnering with the Town on this project will save the county the time and administrative costs that would be incurred if the county were to implement the project under its stormwater program,” according to the county.

Back in 2017, the county board gave $660,000 to the town to partially fund the project. After the town received six bids in December, “the total project estimate has increased by $333,006 due to higher than originally estimated construction bids,” according to the county.

The vote on Tuesday means the county will provide an additional $168,006 to the project, which now has a total estimated cost of $1.6 million.

The project is also being supported by an $825,000 grant from the Virginia Department of Environmental Quality, according to county documents.

“The town will reimburse the county funds that are not expended in accordance with the terms of the attached agreement,” according to the county. 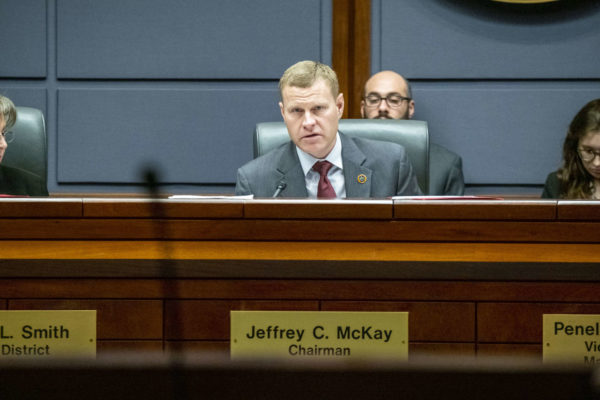 Sitting several feet apart, the Fairfax County Board of Supervisors unanimously voted today (Tuesday) to declare a local state of emergency due to the spread of the novel coronavirus.

The declaration activates the county’s emergency plan and allows the county to expeditiously mobilize its resources. A number of local jurisdictions have adopted similar declarations, including Arlington County.

At the emergency meeting, board members sat roughly six feet apart in order to practice safe social distancing, as recommended by the Centers for Disease Control and Prevention.

Chairman Jeff McKay noted that the spread of coronavirus poses a “public health threat,” but that the county is well-positioned to manage concerns.

“This is not something this is going to be resolved tomorrow,” McKay said, giving a nod to county staff that is working their “tails off” in this “unprecedented” public health crisis.

The declaration allows the county to pursue “coordinated local government to prevent or alleviate damage, loss hardship, or suffering” caused by the respiratory disease, according to the declaration.

Like similar declarations for snow emergency response, the motion also allows the county to apply for federal and state disaster planning funds and increased flexibility in operations.

The county executive will now have the authority to act on behalf of the board, but won’t be able to do anything inconsistent with state orders, McKay said.

“We don’t have as much authority as people think we do,” Vice Chair Penny Gross said, noting that D.C.’s mayor imposed new restrictions on businesses in the city.

“We’re also at the mercy of the governor,” Gross said.

“We will make it through this,” McKay said. “We will have battle scars without a doubt.” 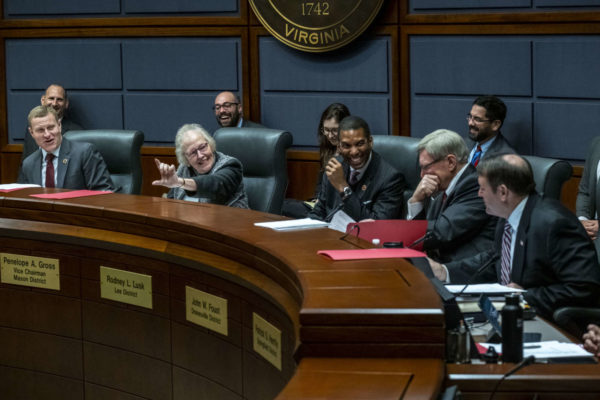 (Updated 3/18/2020) To combat COVID-19, Fairfax County officials are postponing or making changes for online access to their upcoming town halls on the proposed budget.

For residents in the Providence District, the meeting at 7 p.m. on Wednesday, March 25, that was supposed to be held at the Providence Community Center (3001 Vaden Drive) will now be held online.

Providence District Supervisor Dalia Palchik will host the meeting, according to her spokesperson, who added that they are working on setting up links to the meeting.

Meanwhile, the Hunter Mill District budget meeting, which was originally set for March 21, from 9 a.m. to noon at the Town Hall (127 Center Street S.) in Vienna, has been postponed.

It is unclear at this time when the meeting will take place.

“It is very important that you have a voice in the budget process and I will reschedule as soon as it is appropriate,” the press release said.

The upcoming budget discussion for the fiscal year 2021 includes controversial topics such as a deal with the Virginia Department of Transporation to create a legal cut-through program for drivers during certain times when turns usually aren’t allowed.

A rezoning request for a proposed office tower near the McLean Metro station will be considered by the Board of Supervisors later this month. 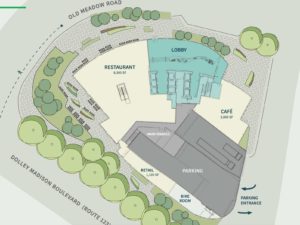 Akridge and the Ronald D. Paul Companies are looking to develop 1690 Old Meadow Road, a triangular spot between Dolley Madison Blvd and the Old Meadow Road, into a 15-story tower with Class A offices.

Called One Tysons East, the project would include a 8,300-square-foot restaurant and cafe on the main level, along with retail space and a bike room, according to the website. 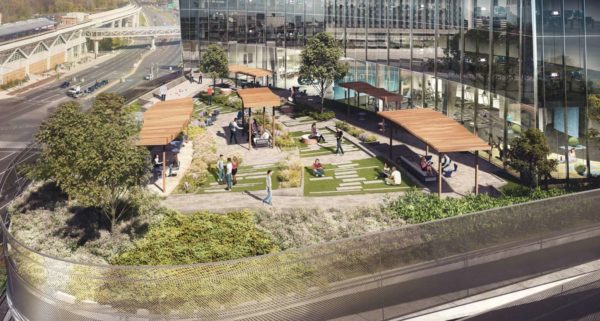 The tower also plans to have a landscaped outdoor terrace with a bocce court on the fifth floor, which would also include a client-only cafe, coffee bar, conference room, fitness center and yoga space.

The developers are looking to increase the floor area ratio and receive approval for their plans.

The Planning Commission recommended approval for the rezoning last April after discussion on how the distinctive curved-glass tower could potentially kill birds.

Now, county documents indicate that the Board of Supervisors will hold a hearing on March 24.

Images via One Tysons East 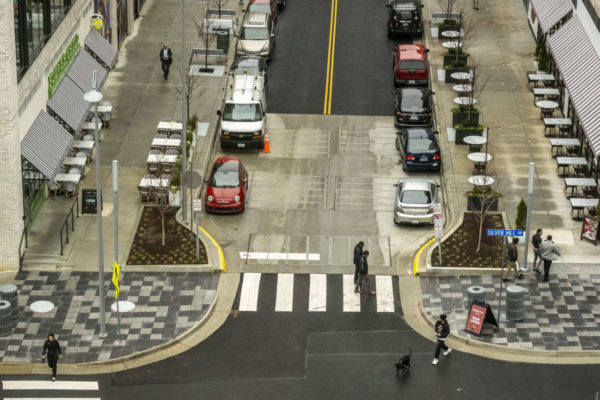 Tysons Auto Group to Offer Luxury Hybrid Speedsters — “Tysons-based Exclusive Automotive Group has since updated its plans to include sales and service of both Karma Automotive and Koenigsegg vehicles. This will be the first presence for both in the D.C. area.” [Washington Business Journal]

Falls Church Concerned About Upcoming Metro Parking Closure — “Falls Church’s Assistant City Manager Cindy Mester will be on an urgent conference call with WMATA officials and her counterparts in Arlington and Fairfax Friday in an effort to mitigate the impact on neighborhoods in the City of Falls Church of WMATA’s plans, announced less than two weeks ago, to close the parking lots at the East and West Falls Church Metro stations months ahead of the closing of the stations for platform repairs over the summer.” [Falls Church News-Press]

Thank you for sharing these great pictures with us. We recently had a local Daisy Troop tour the Vienna Police Station. We are glad the children had a wonderful time and also learned about police work. @TownofViennaVA @fcpsnews pic.twitter.com/cEHkZWSKbh

The Langley School, a private school in McLean, wants a multi-million-dollar makeover.

“The bonds will be entirely supported by the revenues of The Langley School,” according to county documents.

County documents said that the funding will help cover the costs of renovating, equipping and acquiring a three-story academic building that would serve as the school’s “hub,” along with: 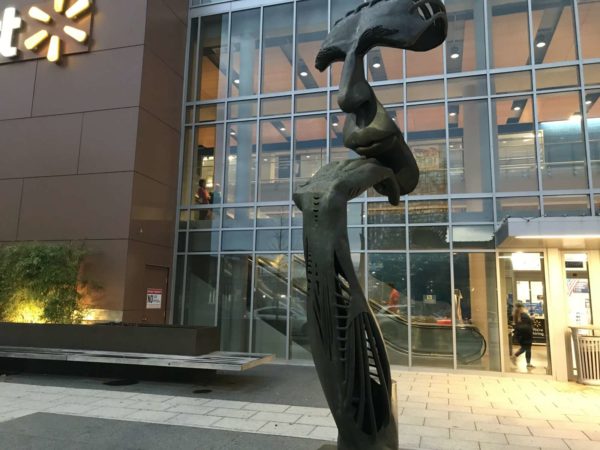 Welcome back from the long weekend! Here are the latest stories about the Tysons area that the Tysons Reporter team has been reading:

Vienna Officials Grapple With Mishaps — “The Vienna Town Council and town staffers devoted the first half of a Feb. 10 work session to discussing why some recent missteps occurred, and what can be done to prevent them in the future.” [Inside NoVa]

Sneak Peek: Later this week, expect Tysons Reporter to provide an update on e-scooters in Vienna and a profile on Fava Pot in Falls Church.

The Hunter Mill District Supervisor is planning on coming to the Town of Vienna in a few weeks to hear from local residents.

Walter Alcorn announced on Twitter that he will hold a town hall on Wednesday, Feb. 26. The event is set to take place from 7-9 p.m. at lecture hall 25000 at James Madison High School (2500 James Madison Drive).

People interested in attending can RSVP to [email protected]

Alcorn hosted his first town hall since joining the Fairfax County Board of Supervisors in Reston earlier this month. 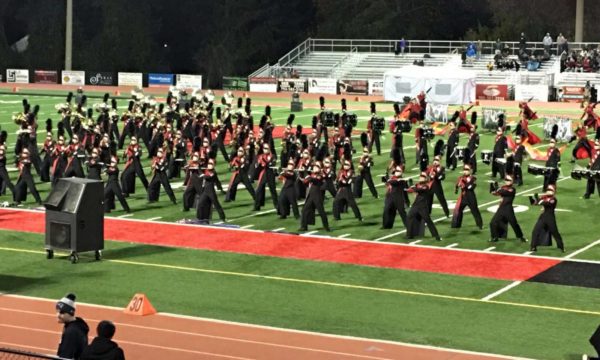 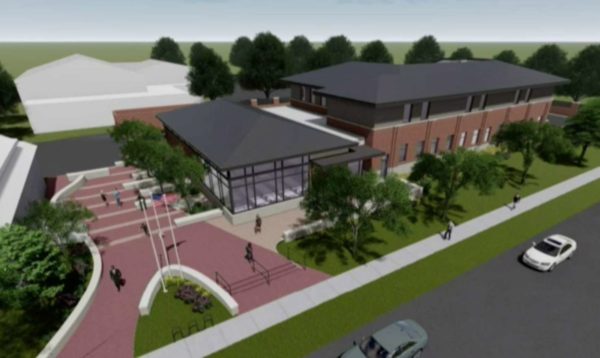 The Fairfax County Board of Supervisors has decided to waive the county building and inspection fees for Vienna’s new police station.

The Town of Vienna is currently designing a new police station that will have a community room and more space.

“This new building will provide the opportunity for the Town to place all their police functions in one building with upgraded technology and security,” the board matter says. “The building is also being designed to accommodate the town’s emergency planning needs and will include additional community space for the town’s residents.”

While the new station is under construction, the police plan to use space in Town Hall and have a temporary station at 440 Beulah Road NE.

“In 2020, Vienna will be submitting plans and applications for this project which require numerous permits and inspections from Fairfax County,” according to the board matter. “The Town of Vienna has requested, and we support, waiving all county building and inspection fees applicable to the Vienna Police Facility Construction Project to best serve the community.”