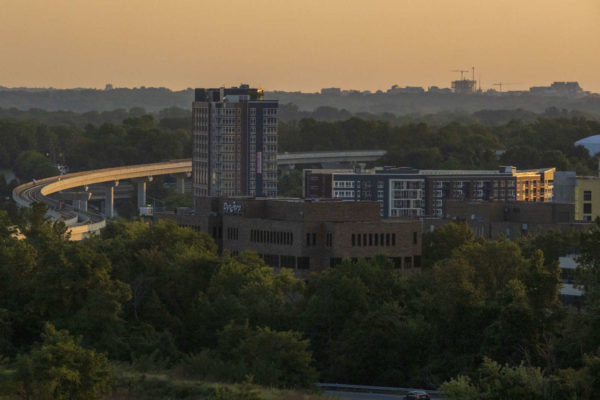 “Forty percent is a tremendous number,” HR&A Partner Stan Wall said during the Tysons Partnership’s State of Tysons panel last week. “Tysons started off at a fairly low bar compared to some of the other communities in the region, but is outpacing Fairfax County and other areas around the region.”

Providence District Supervisor Dalia Palchik attributed much of the growth to the arrival of more young families in the area, as indicated by increases in children, teens, and 18- to 20-year-olds.

“People have not always thought of Tysons as a place where you can raise a family,” she said in a statement. “The increased investment in green space, affordable housing, and transit has made Tysons an attractive option for a demographic that previously did not consider Tysons as a place to live.”

But neither an influx of 57,000 people or the current growth rate are enough to reach Fairfax County’s goal of 100,000 residents in Tysons by 2050, according to Emily Hamilton, a research fellow and director of the Urbanity Project at the Mercatus Center at George Mason University. 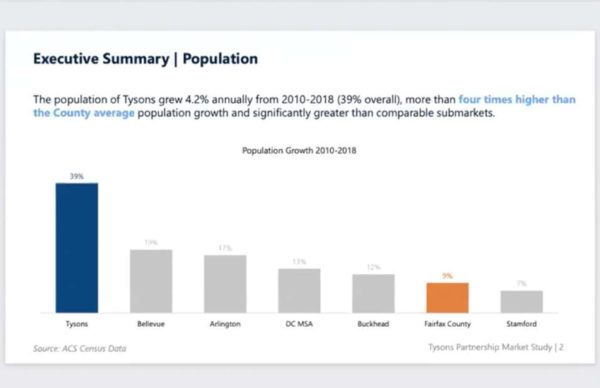 Currently, most development is happening in the one-quarter mile radius around the area’s four Silver Line stations, she said. The lower-density and mid-rise zoning on the periphery of the stations could be amended to allow for more residential growth.

The county is also encouraging large, 10 to 20-acre developments that provide public benefits, such as parks, along with housing, she said. To Hamilton, this approach makes sense, especially if policymakers want to achieve a new grid of streets in Tysons, but it also slows down development.

Tysons relies heavily on the private sector to contribute to and provide public infrastructure as part of developments, Hamilton says, but with land values increasing, it has the capacity to meet the needs of new residents, such as schools.

With a 20% influx in residents under 20, school board members say they area already working to out ways to combat capacity issues at the schools in the Tysons area.

“We are working closely with the community and staff from the school division and Board of Supervisors to better understand and prepare for the impact increasing growth in Tysons will have on school capacity, especially at the high school level,” Dranesville District School Board Member Elaine Tholen said in an email.