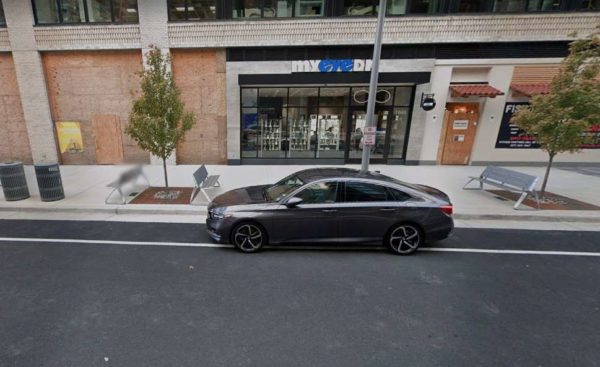 The Fairfax County Board of Supervisors gave the county’s transportation department permission this week to start work on plans for managed curbside parking in Tysons and Reston.

Whether the plan includes paid parking, time-limited parking, designated commercial vehicle parking, or some combination, the Fairfax County Department of Transportation will need at least a year to draw one up for the Board of Supervisors to review, staff said during a board transportation committee meeting on Tuesday.

“Currently in the county, we have a very limited toolbox of parking restrictions that can be implemented by either the Board or VDOT,” FCDOT Section Chief Neil Freschman said. “Generally, most on-street parking on public roadways is uncontrolled.”

The study found that public on-street parking in Reston is incredibly limited.

“We found 211 total public on-street spaces within the study area, which is pretty low,” she said. “Most parking is on private streets, which we don’t manage.”

Comparatively, Tysons had more parking. Staff found 1,272 spaces along 22 miles — or 29% — of curb space on the roadways surrounding the Greensboro, Springhill, Tysons, and McLean Metro stations.

However, parking in Tysons suffers from other problems, including cars parked in “No Parking” zones and travel lanes, along with large commercial vehicles that overstay their welcome.

“Some of these vehicles are reportedly parking for days or weeks without moving,” McCartney said. “Our parking staff has received multiple complaints from Tysons businesses about commercial vehicles that are parking long-term near their building, so we know this is an issue.”

“I think it’s good that staff is looking into how to balance people’s ability to get into businesses and getting more turnover,” Smith said. “Everybody would agree you don’t want commercial vehicles taking up space for days.”

This parking plan is being developed alongside changes to the street grid in Tysons and Reston, Hunter Mill District Supervisor Walter Alcorn told Tysons Reporter. In some cases, parking policies will be developed for streets that do not yet exist, but have been incorporated into the two communities’ comprehensive plans to be more transit-oriented.

The management plan should encourage parking spot turnover to ensure that these future streets near transit stations, which are lined with mixed-use properties, do not become commuter lots, he said.

However, managed parking in Reston’s transit areas will have to overcome the controversy that Boston Properties ignited when the property manager introduced and later modified paid parking at the Reston Town Center.

“The number one lesson is, don’t make all your streets private,” Alcorn said. “We have an awful lot of private streets. What we’ve learned is that the public doesn’t have any say — it is up to the private street owner.”

While private streets make planning events more flexible, Alcorn says the 2017 flare-up, which focused mostly on the garage parking, could also be attributed in part to community members not having a say.

For the most part, though, what FCDOT is working on “is apples and oranges” compared to the RTC, he said.