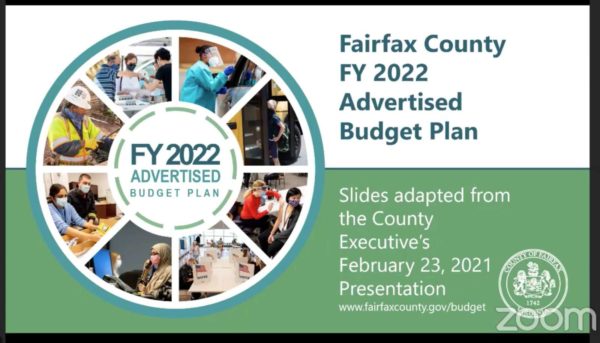 The time for community members to weigh in on Fairfax County’s FY 2022 advertised budget has arrived.

Mondoro kicked off the meeting by discussing highlights of the budget, including the county executive’s recommendation to decrease the real estate tax rate by one cent and building on the $200.2 million the county received through the CARES Act Coronavirus Relief Fund.

During the question-and-answer portion of the meeting, attendees asked if the value of commercial properties could change as leases end and some businesses migrate to smaller workspaces.

“We’re on the edge of a pretty significant paradigm shift in terms of the ways people think about office space,” Mondoro said, adding that the office and retail component of the budget is going to need to be evaluated on an ongoing basis.

While anticipating that the value of the properties will continue to decline, he offered a bit of optimism that a balance of teleworking and in-person work will be found in coming years that could help improve the value of office space.

Mondoro also said that all markets in the area are down and “the negativity is pretty much across the board” in terms of decreases in non-residential revenue.

Foust argued that, while Fairfax County should focus on building up its commercial base, it also needs to reduce its reliance on real estate taxes as a source of revenue.

“We have a fundamental structural problem in that we rely so heavily on real estate taxes,” Foust said. “…Other revenue sources will need to be established in order to make the revenue more dependent on economic activity and economic success as opposed to owning a home for 20 years, which has appreciated significantly more than your income has increased.”

Fairfax County received $200.2 million from the CARES Act after it was signed into law last March to cover expenses incurred due to COVID-19. The advertised budget does not assume additional stimulus funds, but county staff is monitoring another potential round of payments that could come from a new package currently being negotiated in Congress.

Mondoro tempered anticipation that more federal aid could be used to help lower the property tax rates or fund public services like affordable housing or schools, noting that the money is non-recurring and comes with stipulations regarding how it can be spent.

Foust reiterated Mondoro’s words of caution, though he said the county will take a look at all possibilities.