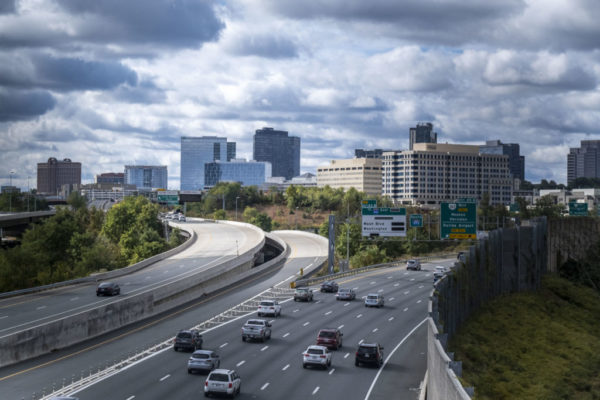 Virginia’s plan to extend the I-495 Express Lanes to the George Washington Memorial Parkway in McLean, just south of the American Legion Bridge, is now one step closer to becoming a reality after the project received key federal approvals late last week.

The Federal Highway Administration (FWHA) and National Park Service (NPS) both determined that the I-495 Express Lanes Northern Extension (495 NEXT) project would have no significant environmental impact based on an assessment submitted by the Virginia Department of Transportation, which announced the news on Friday (July 9).

The approvals allow VDOT to move forward with the design and construction process, even as many community members and local elected officials remain skeptical that the project should advance with Maryland’s Capital Beltway expansion plans in limbo.

“This is an essential step toward bringing relief and multimodal solutions to a section of I-495 that faces daily congestion and unreliability,” VDOT Deputy Commissioner Rob Cary said in the news release. “We are appreciative of the collaboration and partnership from our federal partners, as we work together to implement the best possible solutions to improve travel on the Capital Beltway and in our region.”

Signed on June 29, the FWHA Finding of No Significant Impact (FONSI) considered the project’s implications for surrounding communities, land use, historic properties, water and air quality, noise, and other factors.

The report says building the proposed three-mile toll lanes extension “could result in short-term reduced water quality, floodplain impacts, and forest and wetland impacts,” but the impacts could be minimized with “the implementation of state-mandated best management practices and conformance with current stormwater regulations.”

“Overall cumulative effects of the project are not expected to be significant,” FWHA says in the report. “In addition, current regulatory requirements and planning practices help to avoid or minimize the contribution of present and future actions to adverse cumulative effects for socioeconomic, natural, and historic resources.”

According to the NPS FONSI approved on June 7, 495 NEXT would permanently affect 0.9 acres of George Washington Memorial Parkway because land is needed to tie the project into the existing interstate near the American Legion Bridge. 1.3 acres of park land would be temporarily affected during construction, including the clearing of forest canopy and plants.

Still, the park service concluded the impacts will be minimal compared to the anticipated benefits of the project, which VDOT says will reduce traffic congestion, improve trip reliability, and support more travel options, with the addition of a shared-use path from Lewinsville Road to Live Oak Drive and bus service between Virginia and Maryland.

Endorsed by local chambers of commerce and, with some reservations, the Fairfax County Board of Supervisors, 495 NEXT will move an estimated 2,500 more people per hour through the corridor and reduce travel times for express lane users by 24 minutes during peak hours, according to VDOT.

But many McLean residents, environmental groups, and elected officials have argued that the project will simply move the existing bottleneck at the Dulles Toll Road further north, doing more harm than good unless Maryland also follows through on a joint agreement to construct a new American Legion Bridge and add express lanes to its side of the Beltway.

VDOT officials said at a virtual public meeting in November that I-495 would be able to move up to 5,400 more people an hour by 2025 and an additional 7,600 people an hour by 2045 if the express lanes are expanded on both sides of the Potomac River.

However, Maryland’s toll lanes project hit a major setback last month after the National Capital Region Transportation Planning Board voted to remove it from a federally required air quality analysis study, prompting state officials to blame local leaders for the holdup and threaten to stall other projects unless the TPB reevaluates its position.

In a statement to Tysons Reporter, Dranesville District Supervisor John Foust, who represents McLean, says the traffic issues on I-495 need to be addressed, but he doesn’t believe 495 NEXT is a viable solution without support from Maryland:

I support adding capacity to the American Legion Bridge and the Beltway on both sides of the Bridge. Most of the benefits of the 495 NEXT project, however, will only be realized if Maryland completes their system of managed lanes, including increasing the capacity of the Bridge. Until then, the 495 NEXT project will result in additional traffic delays on the non-toll lanes, and construction of the project will cause significant disruption in McLean and Tysons including permanent damage to parks, streams, and private property.

In Maryland, grassroots groups as well as many elected officials have raised significant opposition to the Governor’s current proposal. The 495 NEXT project should not go forward until it is clear that Maryland will successfully execute a comprehensive agreement with a developer to complete its portion of the project. Since that has not yet happened, and may never happen, it makes no sense to move forward with the 495 NEXT project at this time.

VDOT says it is close to finalizing an agreement for the project’s financing, design, construction, and maintenance with Transurban, the private company that operates the existing I-495 toll lanes.

“Construction on the 495 NEXT project is expected to begin in 2022, with the express lanes extension opening in 2025,” VDOT said in the news release.