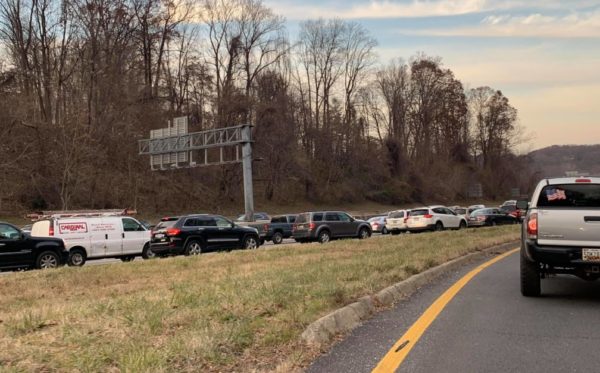 (Updated at 2:10 p.m.) Officially, the Fairfax County Board of Supervisors endorsed the I-495 extension of the express lanes on Tuesday (April 13), but the discussion leading up to that vote showed that some officials closest to the project still have reservations.

Supervisor John Foust, representing the Dranesville District that would ostensibly stand the most to gain from the project called 495 NEXT, said the project only addresses half the problem and, without the other half, could only worsen an already miserable bottleneck.

The plan would add new express lanes from 495’s intersection with the Dulles Toll Road up to the American Legion Bridge, where the plan was to connect with similar lanes on the Maryland-owned bridge and onto the Maryland side of the beltway. Foust’s frustration comes from Maryland dragging its heels on the project despite an earlier pledged commitment to widening.

Foust said that, as recently as December, the Board agreed that VDOT should only consider further action on widening once Maryland executed a comprehensive agreement with a developer to fulfill their half of the project.

“Of course that hasn’t happened, nothing significant has happened since December to justify us reversing our opinion,” Foust said. “I want to make it clear, I think it’s a mistake. Going forward without agreement from Maryland is exposing us to worsening impacts.”

But Fairfax County has faced mounting pressure to endorse 495 NEXT, most recently from Virginia Secretary of Transportation Shannon Valentine. Board of Supervisors Chairman Jeff McKay and others on the board described the endorsement as a good-faith move on Fairfax’s part.

“We don’t entirely control the schedule here,” McKay said. “There are some signfiicant benefits to this project. Everyone is familiar with the gridlock that Foust has explained…We’re close to a guarantee that Maryland is making significant progress.”

“This is a chance for Fairfax County to be a leader,” Supervisor Pat Herrity agreed, “and I think this encourages Maryland to move forward.”

The endorsement passed in a 8 to 2 vote, with Foust and Hunter Mill District Supervisor Walter Alcorn voting against it. The new lanes are scheduled to open to traffic in 2024.