The Virginia Department of Transportation published its final report on ways to improve the safety of Shreve Road in Falls Church yesterday (Monday).

Now available to view online, the Shreve Road Corridor Study report focuses on two miles of roadway between Route 29 (Lee Highway) and Route 7 (Leesburg Pike) that have had recurring issues with pedestrian and bicyclist safety, including a fatal crash involving a pedestrian and an impaired driver in 2019.

The group identified the curve southwest of Oldewood Drive, Shrevewood Elementary School, the Washington & Old Dominion Trail crossings, and the curve between Chestnut and Hickory Streets as areas of particular concern on Shreve Road.

VDOT officially launched its study in March and presented some preliminary recommendations at a virtual public meeting on Oct. 7 that it says was attended by approximately 70 people.

Based on feedback from the community, VDOT’s study team has issued four short-term and six long-term final recommendations, which are listed in order from highest to lowest priority:

VDOT says its team received the most comments about recommendations related to Shrevewood Elementary and the Pinecastle/Buckelew intersection. The reactions to its roundabout proposals were roughly evenly split between people felt favorably and people who opposed the ideas.

As an alternative to adding a roundabout in front of Shrevewood Elementary, the study team proposed removing the existing median and adding sidewalks, crosswalks, and a signalized intersection at Virginia Lane.

While the median removal idea received more uniform community support, the study team says it ultimately decided to recommend a roundabout because it fulfills more study objectives, and there was still “decent” support for the concept.

“While there are similarities between the two options, a roundabout has additional benefits in introducing speed control, reducing the number of crossing conflicts for vehicles, and adding pedestrian medians for every approach to the intersection,” the report says. 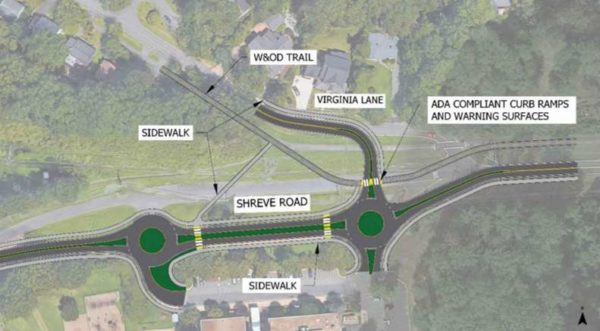 An analysis of existing conditions on Shreve Road found that sidewalks in the corridor often do not meet current VDOT standards and that the majority of vehicles travel between 31 and 42 miles per hour on a street whose speed limit is generally 35 miles per hour.

Of the 80 crashes reported in the area between January 2013 and May 2020, 55% of crashes only caused property damage, but driver behavior was a contributing factor in many incidents. 28% of the crashes involved distracted driving, 18% involved speeding, and 8% involved alcohol or drug use.

While the corridor study was ongoing, VDOT completed striping improvements to remove on-street parking along eastbound Shreve Road in front of the elementary school, which the agency says should reduce congestion by providing room for a turn lane into the school.

VDOT also installed two new flashing beacons at the W&OD Trail crossing in October, and the Fairfax County Department of Transportation received a Safe Routes to School grant from the state that will fund the addition of three new crosswalks at Shrevewood Elementary.

As VDOT emphasized at its October public meeting, none of the recommendations are guaranteed funding or implementation.

“The purpose of this study is to develop proposed improvements which then Fairfax County can apply for funding to develop all or some of the recommendations,” VDOT architect and engineer Carol Sinclair said. “We appreciate everyone’s involvement and input during the study phase.”

Read more →
More Stories
Poll: How Are You Going to Ring in the New Year?The Boro’s Santouka Ramen Heads into New Year with Expanded Menu