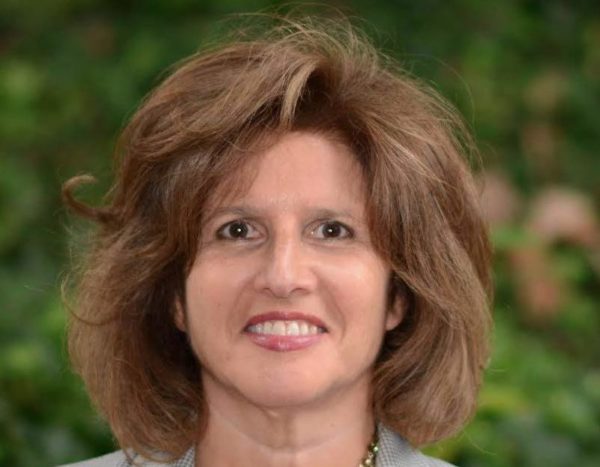 (Updated at 4 p.m. 8/6/19) Colleagues are commemorating the woman who died from a hit and run in Falls Church as a loving mother, wife and passionate U.S. State Department employee.

Police said Betty Ana Bernstein-Zabza, a 60-year-old Falls Church resident, died as a result of injuries from the crash, which happened shortly before 3 p.m. Saturday near the intersection of Shreve Road and Hickory Street — less than a mile away from her home.

“Detectives from our Crash Reconstruction Unit have preliminarily determined that [Bernstein-Zabza] was walking with a juvenile northbound on a pedestrian pathway adjacent to Shreve Road,” police said. “They entered a crosswalk that connected the pathway to a sidewalk when they were hit by a stolen 2013 Nissan Titan pickup truck.”

A State Department spokesperson told Tysons Reporter that Bernstein-Zabza was a senior advisor in the Bureau of Counterterrorism.

“Ms. Bernstein joined the Department of State on Oct. 1, 1993 and served at overseas posts in Warsaw, Bern and Berlin, as well as several domestic posts,” the spokesperson said.

Jane Zimmerman told Tysons Reporter that she will remember her former work colleague as a loving mother and wife. “Her son was her everything. She cherished every moment with him and was so grateful for her husband as a wonderful father and loving family man,” Zimmerman said.

Zimmerman also said that Bernstein-Zabza especially loved working on global women’s issues and supporting and mentoring her colleagues at the State Department.

“Her experience from Pakistan to Poland and Germany made her take women’s issues and human rights close to her heart,” Zimmerman said, adding that she was a wise, compassionate and joyful person who “could always make us laugh, especially at ourselves.”

Known for her efforts to empower women, Bernstein-Zabza spoke at several events advocating for providing more tools for women to succeed.

Betty Bernstein-Zabza: State Dept looking esp at adolescent girls to give them tools and access to help gain foothold #DiversifiedInnovation

Another former work colleague, Marci Hodge, told Tysons Reporter that Bernstein-Zabza “worked so hard for women and girls particular in this world and we all owe her a debt of gratitude for her leadership on these issues.”

Hodge said that Bernstein-Zabza hired her and helped get her started on her “dream job” at the State Department. “I would not be here without her.”

Shakyra McMillon, who was supervised by Zabza in the Office of Global Women’s Issues at the State Department, said that Zabza was “a great leader and you made sure the women and girls priorities were known.”

She said that Bernstein-Zabza was “an inspiring, goal-driven, intelligent, and thoughtful woman,” adding, “Not only were you a great colleague but a wonderful mother!”

Maryum Saifee, who worked with Bernstein-Zabza in the Office of Global Women’s Issues, said that her former colleague “was part of this special crew of rockstar colleagues that represented the very best in public service.”

“She helped bring me into that office by creating a special tour of duty that year — which was bureaucratically not easy, but she fought for me,” Saifee said. “And because of her, I was given a platform to fight for issues I care deeply about and grow professionally as a diplomat.”

RIP Betty Bernstein-Zabza, 60, who proudly served the @StateDept as a Foreign Service Officer & returned a couple years ago to work for @StateDeptCT part-time. She was killed in a hit-and-run over the weekend. Every colleague of hers loved working w/ her & we are all heartbroken. pic.twitter.com/XMh7PXkL5c

Tragic news about a friend and fellow #StateDept employee from #FallsChurch Betty Bernstein-Zabza. We worked together years ago on the Pakistan desk. — "Woman walking on pathway killed by driver in stolen pickup" https://t.co/CaYaebx17c

Police arrested the vehicle’s driver — 46-year-old South Riding resident David Alan Francis — and charged him with one count of felony hit and run. Detectives believe Francis may have been involved in additional criminal events yesterday in both Fairfax County and adjoining jurisdictions.

Since 2009, Francis has faced 30 charges including many traffic-related ones like driving under a revoked or suspended license, operating an insured vehicle, speeding and improper driving, according to court records.

A bouquet of flowers left at Shreve Road and Hickory Street where Betty Bernstein-Zabza was struck and killed Saturday 📷: @VernonAndOn https://t.co/bcipnfLoYp pic.twitter.com/3Wg8BcPi4c