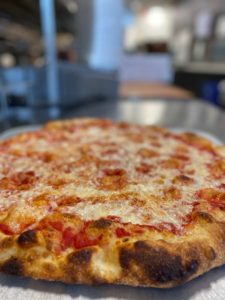 When Andy’s Pizza had to close, along with dozens of other restaurants and stores in Tysons Galleria, co-owner Emily Brown figured it would be around three to six weeks before they reopened. Seven months later, the restaurant has reopened, but the local pizza spot that had a steadily growing business at the start of the year is now fighting for survival.

“We worked really hard to build what was starting to take off,” Brown said.

Brown said shutting down was the right decision, but it was still hard on small businesses. Even with Andy’s Pizza officially reopening around two weeks ago, Brown said the office lunch crowd that was a mainstay of the business has all but disappeared.

“90% of our business was lunch, and the happy hour was starting to take off, all from offices,” Brown said.

Andy’s Pizza was one of the restaurants that helped launch Taste of Urbanspace in Tysons Galleria in 2018, a replacement to quick collapse of Isabella Eatery that put together smaller outlets of beloved restaurants and food vendors throughout the region.

Throughout late 2018 and 2019, restaurants like Stomping Ground, Donburi and Andy’s Pizza built a community on the upper floors of the mall and established a dedicated local following. Andy’s Pizza even launched a pop-up with Stomping Ground’s Del Ray location. But that community is now in jeopardy as the local hospitality and office markets remain devastated as a result of the pandemic. 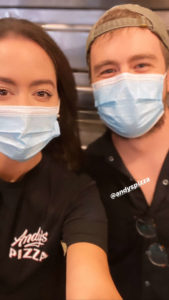 Brown said the goal now is trying to tap into the McLean and Tysons residential markets who might not have been familiar with their pizza or assume the restaurants in the mall art part of national chain franchises.

“We need to capture McLean and Tysons,” Brown said. “People have come back that already liked us. But so much of our sales have come from offices, so if we don’t recapture part of the neighborhood… well, it’s hard to let people know that we’re a small family owned and operated business and we pour our hearts into every pizza.”

Andy’s Pizza is the brainchild of Emily Brown and her cousin, Andy Brown, the co-founder of D.C.-based Eat Pizza. Andy’s Pizza offers pizza by the slice or whole pies, while Emily Brown helped spearhead the inclusion of a curated craft beer menu.

Now, the restaurant is doing delivery, with orders available through their website as well as Uber Eats or Postmates. Some tables are set aside, with the area measured seven feet apart, but the focus is on offering take-out.

“We used to just worry about selling good pizza, now we worry about ‘Did we sanitize that table?’ or ‘Did that person come up without a mask?'” Brown said. “It’s just so involved to sell pizza.”