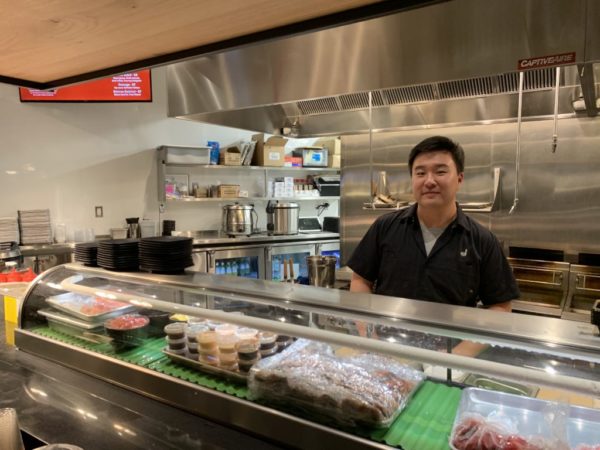 Admittedly, the new Donburi in Tysons Galleria is a little smaller than the Adams Morgan or Dupont Circle locations.

But, for owner James Jang, this smaller location in the Taste of Urbanspace food hall allows him a special opportunity: he can try something new.

With two established locations in D.C., Jang said he’s hesitant to change the menus too much. But soon, Jang says he plans on trying out adding udon, a type of thick Japanese noodle dish, to the Tysons location.

“We’ve just opened here,” said Jang, “so we can be a little more creative with what we try out.”

Like the nearby Andy’s Pizza, the restaurant has also filed for an ABC permit in hopes of being able to serve Japanese beer and sake.

“We’re looking to get the beer on draft if we can,” said Jang. “We might do cocktails as well.”

Jang has owned and operated Donburi for six years and jumped at the chance to join Taste of Urbanspace, a collection of new locations from regional favorites that filled the void left by the high-profile collapse of Isabella Eatery.

For Jang, the opening in Tysons is also a homecoming, though he also said moving back into the area has been a rediscovery of how much it has changed since he grew up in nearby McLean.

“I used to live here,” Jang said. “I went to McLean High School, so this is more of a hometown than D.C.”

The most popular dishes on Donburi’s menu are the karaage salad, a soy sauce marinated chicken with mixed greens, and sakedon, a salmon sashimi that Jang says is the restaurant’s signature dish.

END_OF_DOCUMENT_TOKEN_TO_BE_REPLACED

More Stories
Government Closures and a Musical Performance Set for MLK Day WeekendTysons Agenda: Events Around the Area This Week