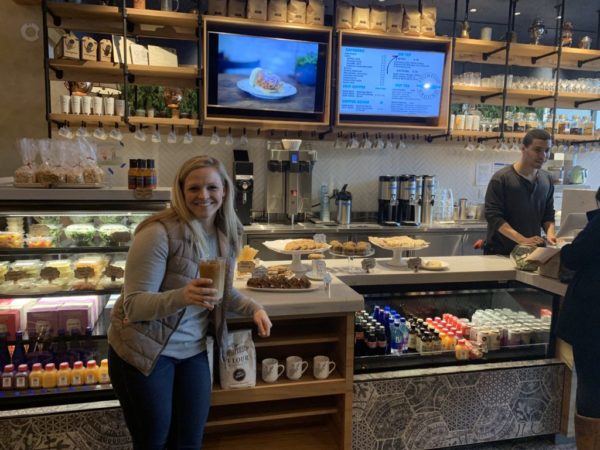 In the middle of an interview with Tysons Reporter, a woman walks up to Stomping Ground owner Nicole Jones and introduces herself as “Steve’s mom.”

Jones immediately recognizes Steve by name and “Steve’s mom” said she was just running errands in nearby McLean and wanted to stop by and say hello. It’s a small moment that’s a testament to the kind of community building that the new Stomping Ground in Tysons Galleria will live or die by.

Stomping Ground isn’t just one of the restaurants in the new Taste of Urbanspace that opened in December as part of a quick turnaround to replace Isabella Eatery — as the shop closest to the entrance, it serves as a gateway into the new dining hall.

Stomping Ground is perhaps best known for their buttermilk biscuits and fried chicken, both of which are available at the Tysons Galleria location. The eatery’s wide variety of hot and iced coffees, averaging around $3 per cup, seems like their most popular item on the Tysons Galleria third floor. 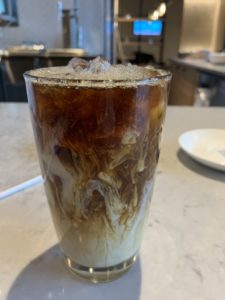 Jones knows coffee. On sight, she can tell what type of milk was used in a beverage based on the consistency of the separation. For her, coffee is more than a beverage.

“Coffee culture is a comfort place,” said Jones. “We take that old school southern hospitality and bring it to the mall. We’re genuinely interested in your name, your dietary restrictions and where you work. We want regulars. We want to be the ‘Cheers‘ of breakfast.”

It’s been four years since Jones opened the first Stomping Ground in Alexandria’s Del Ray neighborhood. The destination proved so popular it was name-dropped in a Wall Street Journal article explaining why Amazon came to Northern Virginia.

“In Tysons, there is less of a town square, but we’re learning that [Taste of Urbanspace] can serve as that,” said Jones. “People can come and hang out.”

That’s certainly the case among the restaurant owners on the mall’s third floor. In their downtime, managers from Stomping Ground, Andy’s Pizza and others regularly converse and hang out in the lavish seating area. Jones said all of the restaurant staffers had to work together through a hectic, quick turnaround during the holiday season and emerged as friends.

While several of the customers around Taste of Urbanspace are familiar faces day after day, much of the expansive food hall remains underpopulated.

It’s too early to say if the “town square” idea will catch on. Beyond just owner Mike Isabella’s public fall from grace, the Isabella Eatery (whose shell Taste of Urbanspace inhabits) collapsed in part due to low sales.

Jones and other restaurant owners expressed hopes that expanding the dining hall’s nightlife options will help draw in the after-work crowd, which currently has few options outside of the Tysons Biergarten.

Like their neighboring Andy’s Pizza, Donburi and Sen Khao, Stomping Ground is currently working through the Virginia ABC permit process. While Andy’s Pizza and Donburi plan on bringing in new beer options to the Galleria, Jones said her focus is going to be on wine and a variety of custom cocktails.

The cocktails, currently not available in Del Ray, are one example Jones points to of how the new location allows Stomping Ground to try new things that, if they work, might make their way back into the Alexandria location. Jones said she is also currently working on the restaurant’s new proper dinner menu, saying it will have Stomping Ground’s signature fried chicken with a mix of vegetables in keeping with southern tradition.

“The nighttime is where we will grow and spread our wings,” said Jones.