The plan for downtown McLean will break it into three zones, but local residents want to make sure it doesn’t become a second version of Tysons.

After a year of meetings with the community, contractor Streetsense presented its final vision for the McLean Community Business Center (CBC) last night (Monday) in Longfellow Middle School.

In Streetsense’s final proposal, the McLean CBC would be broken into three categories: center, general, and edge.

Colin Greene, Director of Planning at Streetsense, said the center zone could be occupied by either retail or residential spaces with a few offices. Buildings in this area would generally go up to seven stories, though Greene said those could be up to ten stories if they offer open space benefits.

In the general zone, Greene said the building heights could go up to five stories tall, with an emphasis on scaling development down as it approaches the edge zone, which would primarily consist of two or three story residential buildings.

“We expect and recommend that that [scale of residential development] continues,” said Greene. “Redevelopment would need to be in-kind and similar in scale and size.”

The map at the meeting showed the center zone in dark purple, with the general and edge zones in lighter shades. 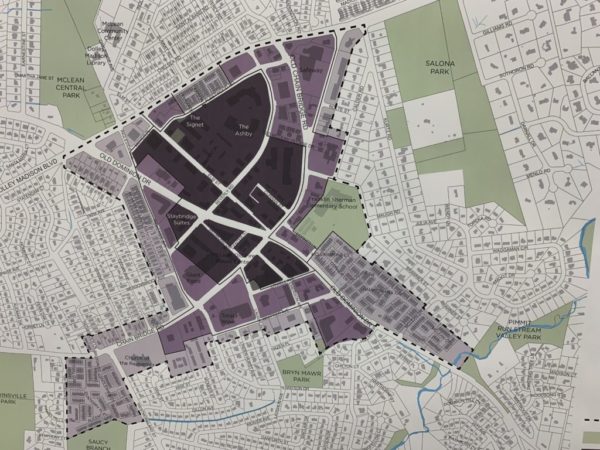 The new plan puts McLean’s downtown center at the corner of Elm Street and Beverly Road, a corner whose most notable occupant today is the “Wok & Roll” Chinese restaurant. But the proposal would see the corner eventually developed with towering new residential and office buildings with retail frontage.

This new plan would also require substantial infrastructure improvements, including road improvements for Elm Street and Beverly Road and converting the nearby Center Street into a pedestrian avenue.

Several of those in attendance at the meeting had concerns about the level of density in the new downtown McLean, particularly with the proposal of a seven or ten-story office building in the heart of the CBC. More than one McLean local said they didn’t want to see the downtown turned into another Tysons.

Robert Moll, a McLean resident, said he looked at the sudden expansion of development in downtown Bethesda, Maryland, and said he didn’t want to see this happen to McLean.

“The CBC is not going to compete with Tysons for office space,” Greene said. “There is a low need for offices [here]. We don’t foresee a long or deep demand for office use.”

Green said most of the office space proposed for downtown McLean would be replacing existing, aging office buildings rather than adding new office capacity.

One local resident said that many of his neighbors and other members of the community would have liked an option for things to remain the same in McLean rather than see any new development, but many in the audience vocally opposed this idea.

“I’m out and about all the time and I get a lot of feedback on when I’m not getting something done,” said Supervisor John Foust. “One [bit of] feedback I get a lot is that we’re not doing enough to make McLean a place people can come together. That’s what they tell me they want in McLean. It’s not a scientific survey, but there’s support for doing something good but not overboard.”

After the presentation, those in attendance browsed the final plan spread across several boards in the back of the room.

“There are some real positive things here,” said Rob Jackson, chair of the McLean Citizens Association’s planning and zoning committee and a member of the CBC task force. “I like the focus on Elm Street and Beverly Road and putting the focus there. But I still have questions about where cars are going to park when people come for this pedestrian area.”

Walkability, even since the early meetings, was one of the most talked about topics for McLean residents at the CBC meetings.

“We enjoy walking everywhere,” said Frank Peterson, a local resident, “so we fully support the comment that this effort should integrate pedestrian-friendly ways to get around.”

Foust said working through the parking and pedestrian issues related to the McLean CBC study are going to be a priority as committees begin to meet in January to start looking at how to turn this vision plan into a reality.