A common theme at last night’s (Thursday) open house for the McLean Community Business Center (CBC) Planning Study is that McLean is a community without a sense of identity. The CBC is as close as McLean has to a downtown, but it’s one whose core has more gas stations than coffee shops.

The CBC Planning Study is an effort to change that and transform downtown McLean into something residents could be proud of and hopefully kickstart economic revitalization in the area. The CBC Plan would act as an update to the 20-year-old Comprehensive Plan for McLean. 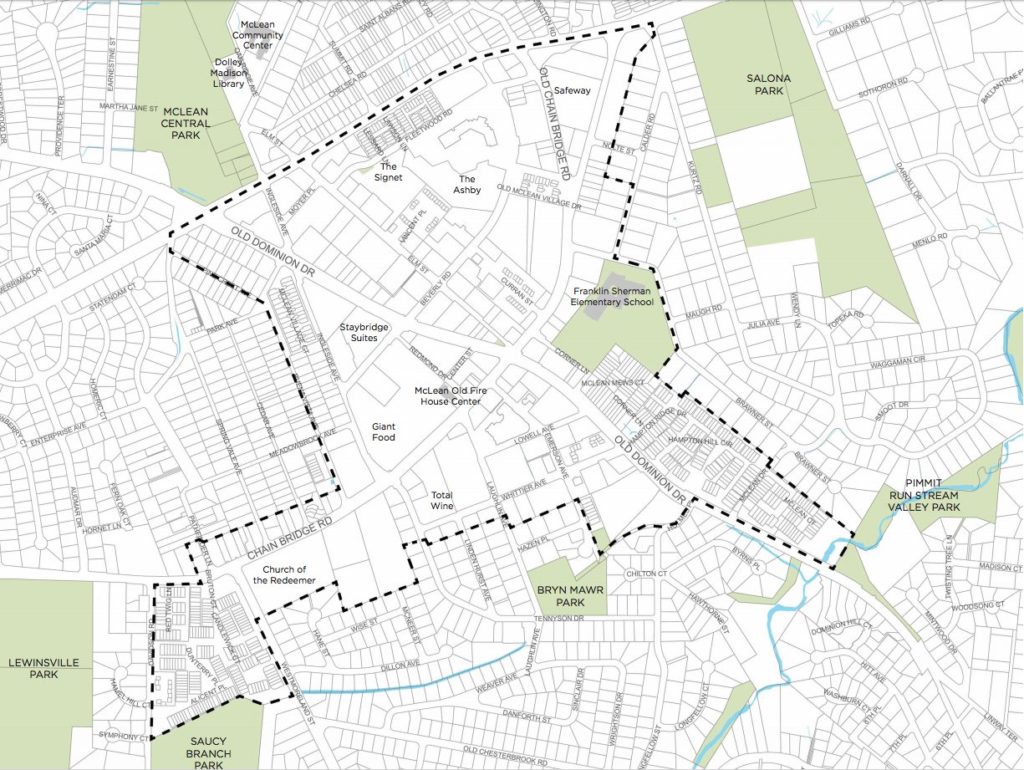 McLean exists on the periphery of the hustle and bustle of Tysons, feeling more like a village than a city. At the meeting inside the McLean High School cafeteria, the few dozen attendees mostly knew each other and many have been to earlier CBC planning meetings. But unlike other Northern Virginia communities like Arlington or Falls Church, citizens of McLean say there’s no feeling of a central community.

“I would like McLean to have a sense of place,” said local resident Nancy McFalls. “I want to go here and feel like there is a downtown. Nothing crazy big, not a megalopolis, but it would be cool if it felt like a more organic downtown area.”

McFalls, like many other nearby residents, said she wants the area to be more walkable.

“I drive to the Giant, then I get in my car and drive across the street to the Total Wine,” said McFalls. “It’s not far, but I don’t want to be hit by a car crossing the road.”

As McFalls started talking about her vision for a more pedestrian- and park-friendly downtown McLean, friends joined in and referenced the Italian tradition of “la passeggiata,” the art of a social walk in the evenings. McFalls agreed, saying they hope for a more European-style downtown where residents can mingle and enjoy the local park.

“Currently, McLean is a place where you run errands,” said Kim Dorgan, a local resident and chair of the McLean CBC Study Task Force. “I would like McLean to have more of a village feeling, something distinct from the high rises in Tysons.”

Rob Jackson, chair of the McLean Citizens Association’s Planning and Zoning Committee, echoed sentiments from Supervisor John Foust in saying that the area will also have to contend with the ever-swelling plague of traffic coming to and from Tysons through McLean.

Greene also noted that residential growth in McLean is expected to rise, with 900 total units projected to be built in the area over the next ten years. Most of these, Greene said, will be apartment buildings.

But Bill Frazer, a local resident, said he was concerned that the plans and projections didn’t take into account the intentions of the people who own much of the land in downtown McLean.

“There are people here who own a significant amount of property,” said Frazer. “So all that talk about new office space and such going in there won’t happen without those property owners.”

Katrina Newtson from the Fairfax County Department of Planning and Zoning said the task force is comprised of several landowners and is working on pulling all of the major stakeholders in McLean into the process.

Input on the CBC Planning Study will be collected until Nov. 15. The next open house will be held on Nov. 8 from 7-9 p.m. in the McLean High School cafeteria.

The CBC Planning Study meets through early spring to draft a plan for downtown McLean. In late 2019 or early 2020, the final vision plan will be sent to the Board of Supervisors for adoption.