(Updated 11/20/19) People have some casual food and drink newcomers near the Spring Hill Metro station.

Jersey Mike’s and B.GOOD both have signs in their windows in Tysons West Phase III — a redevelopment that added new retail buildings across from Walmart — saying that they are hiring.

B.GOOD, a Boston-based eatery that offers a variety of grain bowls, salads, burgers, milkshakes and smoothies, also has a sign saying it’s opening this fall.

Next to the new Smoothie King, construction is currently underway on the new spot for the sandwich chain.

As 1st Stage Theatre outgrows its current Tysons home, the theater is hoping to move to a proposed mixed-use development by the Spring Hill Metro station.

The theater’s artistic director Alex Levy told the Fairfax County Planning Commission Wednesday night that the theater is negotiating with the county and the developers of the proposed Tysons West development known as The View.

“The stunning new venue that was designed in The View was built specifically for a thriving company like ours,” Levy said. “It will serve as the heartbeat of an exciting and thriving new development.”

Levy told Tysons Reporter last year that the theater has been growing in attendance by 15% year after year — creating capacity issues at the theater’s current space at 1524 Spring Hill Road.

While the theater wants to expand, Levy has said that 1st Stage wants to stay in Tysons.

Levy praised the county and developers for working on the art spaces with specific users in mind and aiming to offer reduced rent for a not-for-profit company, like 1st Stage.

“What makes 1st Stage’s success remarkable is it happens in a landscape in which most of the D.C. region has strong arts funding and subsidized venues,” Levy told the commissioners.

Paul Kohlenberger, the president of the Greater McLean Chamber of Commerce, told the commissioners that he supports the idea of subsidizing the lease for 1st Stage at The View.

Vienna-based Clemente Development Co.’s development would add six buildings, including a 600-foot-tall office building that would snatch the “tallest building in the region” title from Capital One’s headquarters in Tysons East and the Washington Monument.

“We think the diversity of height in and around Tysons is absolutely critical,” a representative for the developer told the Planning Commission.

Known as the Iconic Tower, the tallest building would capitalize on its height with a publicly-accessible botanical garden and observation deck.

While the commissioners have lingering concerns about making the buildings bird-friendly and the logistics with an athletic field tied to the project, they were mostly supportive of The View — especially its focus on the arts.

“One thing that doesn’t work is a theater that is designed for everyone,” John Carter, the commissioner for the Hunter Mill District, said. “Those tend to fail because there’s no such design that works for everybody.”

In addition to the planned black box theater, The View wants to have an art walk, seasonal ice loop, open-air theater on the green and a Tysons Community Center at a nearby site.

“The arts are essential to thriving and robust communities,” Linda Sullivan, the president of ARTSFAIRFAX, said, along with pointing out that Capital One’s planned performance hall and The View will be “important anchors and drivers” of the arts locally.

The Landing Public Sky Park would include an outdoor amphitheater. Meanwhile, the Theater on the Green — also known as the Common Green — would be located between The Landing and one of the buildings.

“The Theater on the Green will provide space for outdoor dining, an open lawn, wayfinding, special paving and banding to visually guide pedestrian flow, a stage for events and performances, outdoor seating, outdoor games, artful lighting, access to multi-modal paths and a continuation of the Art Walk Loop,” according to county documents.

More from the developers’ plans for the black-box theater:

The proposed development anticipates that the applicant will construct the 199-seat black-box theater, which will be leased to an arts, entertainment, or theatrical group at a very significantly discounted rate. The theater will include “back of house” space for rehearsal, set construction, and other support activities.

The applicant has been in discussions with local theaters and arts groups, as well as national experts in this field; these discussions have continued to inform the design and practical parameters of the proposed theater space.

“The arts can have a ripple effect,” Sullivan said, adding that national studies have shown that arts have a positive economic impact.

Phillip Niedzielski-Eichner, the commissioner for the Providence District, deferred the decision on the “visionary project” to next Thursday, Oct. 10.

The View heads to the Board of Supervisors on Tuesday, Oct. 15. 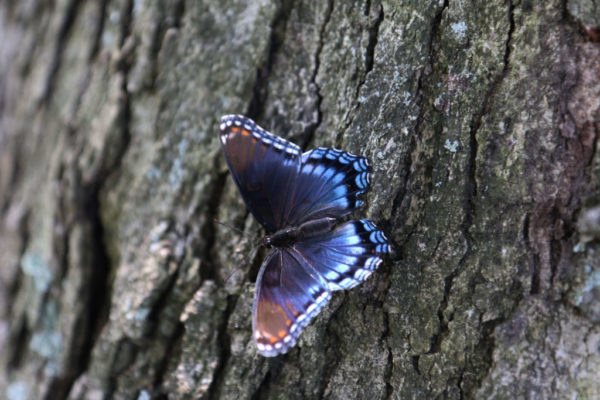 What’s It Like to Live in Tysons West? — “Tysons West is one of those small neighborhoods that is mainly made up of a few high-rise apartments, businesses and car dealerships… Today, [Westwood Village] is still a pocket of Tysons West that some residents call a hidden gem.” [The Washington Post]

Tysons: The Next Travel Destination — Forbes has an article explaining why Tysons is a “hidden travel gem.” [Forbes]

There’s Something in the Water — “A Smithsonian researcher has just stumbled upon a major discovery in the swamps in and around D.C.: a new species of blood-sucking leeches with up to 59 teeth.” [Patch]

The shopping center near Walmart is finally starting to come together.

According to a contractor working at the scene, construction on the initial buildings of Tysons West Phase III is expected to wrap up within the next month or so.

There are four buildings under construction between the Walmart and Leesburg Pike just west of the Spring Hill Metro station.

In contrast to the towering heights planned to the east, the offerings at Tysons West Phase III are more typical of strip malls like the Pike 7 Plaza a few blocks south. The new shopping is set to include a Smoothie King, Jersey Mike’s, COX and Dunkin’ Donuts.

The contractor said construction at the retail buildings closest to the Walmart was going to be the soonest to open, while the two closer to Leesburg Pike will open later.

The opening is slightly later than the spring opening.

(Update 11 a.m.) As Tysons works its way towards being a fully fledged city, The Iconic tower is being designed to be one of the area’s first real landmark buildings.

At 600 feet tall, the planned Iconic tower in Tysons West is the most visible of the Clemente Development Company’s plans for Tysons West, an area surrounding the Spring Hill Metro station. The tower had originally been planned for mixed residential-commercial, but in August was transformed into an almost-entirely office development.

The tower is just one part of the developer’s sprawling 3 million-square-foot redevelopment plans.

The first building planned for development is a hotel and a condominium building on the north end of the site, to be followed by an office building just south near the Metro kiss-and-ride. Juliann Clemente, President of Clemente Development, said while the development could do nothing to affect the Metro exit, the Fairfax County-owned kiss-and-ride and property just east of the station exit is being transformed into an open plaza with the kiss-and-ride being relocated.

A street is planned to bisect the property, with a residential, retail and arts district located just to the west of the offices. Unlike the nearby Boro project, Clemente noted that the project is entirely tightly clustered around the Metro station and on a flat elevation. While The Boro project is designed to be a day-to-day retail experience to compete with the Tysons Corner Center mall, Clemente said the View project is designed to be a one-stop-shop for everything someone would need in a retail, residential or office experience.

The project also includes plans for a 199-seat black box theater at the project, replacing a 500-seat theater that had been in earlier plans. Clemente said the theater was the result of a negotiation with Fairfax County.

“Capital One has a 2000-seat performing arts center,” Clemente said. “We wanted something more intimate and flexible. This is the heartbeat of the project.”

As part of the proffers for the development — incentives offered by a developer to allow for exceptions to zoning ordinances — the Clemente Development Company is currently looking funding construction of a new community center behind the nearby fire station at 1560 Spring Hill Road, with four to five levels of the building set aside for affordable housing. The developer is also planning to contribute $750,000 to construct an athletic field at Raglan Road Park.

The project is still in the early stages of land use approval. Kevin MacWhorter, a lawyer working on the project said the item is docketed to go to the Fairfax County Planning Commission and Board of Supervisors in October. If the project receives approval, Clemente said construction could break ground on the first building as early as next spring.

“We’ve been watching Tysons grow since 1983,” Clemente said at the developer’s headquarters at 8500 Leesburg Pike. “When Metro came through, we knew the time was right to do this development.” 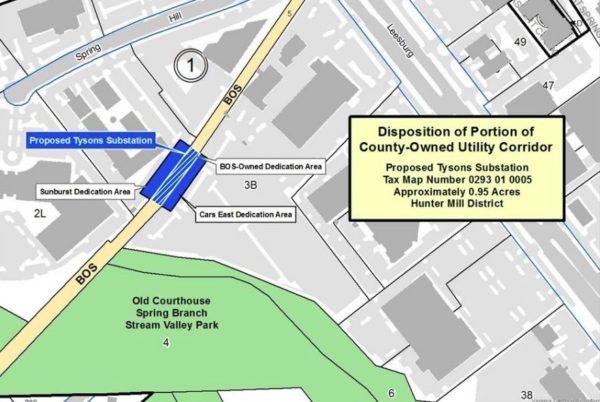 Fairfax County is scheduled to make nearly $3.9 million off of the sale of a property in Tysons West to Dominion Energy, in order to turn the vacant plot into an electric substation.

The item was scheduled for consideration at today’s (Tuesday) Fairfax County Board of Supervisors meeting, but was deferred by Hunter Mill District Supervisor Cathy Hudgins without discussion to March 5 at 4 p.m.

The property includes two parcels proffered to the county via rezoning processes. According to the agenda item, the funding raised from the sale will be allocated to public facilities projects in the Tysons area.

The new substation is planned to be constructed just south of Spring Hill Road near Leesburg Pike. The property is west of the Dominion Square development.

Because the parcel is not needed for right-of-way purposes, and since the small size of the parcel and its isolation from other public land make it unsuitable for any other public use, the County will serve the greater public benefit by conveying the parcel to Dominion Energy for redevelopment.

Work is coming along on the latest addition to the growing development around the Spring Hill Metro station.

A project dubbed “Tysons West Phase III” is set to transform the under-utilized lot across from Walmart and create a mixed-use development.

“Tysons West Phase III builds on the success of the Walmart and 24 Hour Fitness [that] anchored Tysons West Phase I and provides an interim development of in-line retail buildings organized around surface parking,” construction contractor L.F. Jennings said in a press release. “These retail buildings will provide dining and service retail options that take advantage of the vehicular hub nature of the location as well as proximity to the metro station, local residents, and nearby offices.”

The development will contain four single-story buildings, with a combined 22,800 square feet of retail space.

Construction on the project started last July and is scheduled to be completed in the spring.

Future Tysons West development is planned north of the site, and some of the car dealerships to the south are on sale with plans to be redeveloped as mixed-use buildings.