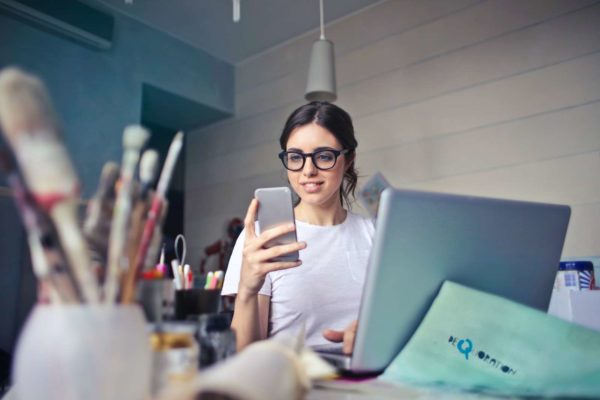 If you are in need of a job, training or an upgrade in careers, the Fairfax County Economic Development Authority (FCEDA) may have what you’re looking for.

The FCEDA is offering a Hiring and Reskilling Virtual Career Fair on Thursday, Oct. 8, from 1-4 p.m., and more than 20 companies hiring for thousands of jobs in Northern Virginia are involved. Participation in the online event will be free after jobseekers register online.

The event is the third virtual career fair sponsored by the FCEDA this year. The previous two events drew over 800 attendees each, according to the organization.

FCEDA’s virtual fair is an active attempt to help workers displaced by the COVID-19 pandemic.

“The economic effects of the pandemic continue to be felt particularly hard among our residents in industry sectors such as hospitality, transportation and restaurants, so I am grateful that the FCEDA is working to reach those workers,” Jeffrey C. McKay, chairman of the Fairfax County Board of Supervisors, wrote in a press release. “This is a great way to make sure that all of our residents have access to open jobs and opportunities to gain new skills.”

The fair is open to people of all levels of experience. Open positions will include a variety of jobs and industries, and not all will require a college degree. Some participating organizations will offer candidates opportunities to train and be placed in tech careers for free.

Among the companies and organizations seeking job candidates or job training programs are:

The event will allow participants to view companies in a virtual lobby, view open positions, talk with human resources representatives and engage in video conferencing.

“The FCEDA is proud to present the Hiring and Reskilling Virtual Career Fair,” Victor Hoskins, president and CEO of the FCEDA, wrote in a press release. “We thank the companies that will be interviewing candidates at the fair and the organizations that offer reskilling and upskilling programs. Many people are in need of jobs because of layoffs at this unprecedented time. Each person hired saves a household. We at the FCEDA are here to help.”

To attract talent to the Northern Virginia area, the Fairfax County Economic Development Authority is hosting a workshop for regional companies.

The online Talent Attraction Workshop: Marketing Northern Virginia will take place Tuesday (Sept. 15) from 11 a.m.- 12 p.m. and help employers understand what draws people to the area and how to recruit talented individuals, according to a press release.

There are roughly 80,000 currently untilled positions in the region, the website said.

“The workshop will also reveal top findings from talent perception research commissioned by the FCEDA, as well as findings from a national survey of 1,600+ people recently conducted by Development Counsellors International (DCI) — the leader in marketing places,” the press release said.

For those who are interested, the event will also include an introduction to an online hub for talent to learn about career opportunities and relocation information.

“The hub includes a job board with 90,000+ active listings in Northern Virginia, upskilling and training resources, a cost of living calculator, a community finder quiz and more.”

Potential attendees can register for the Zoom session online. 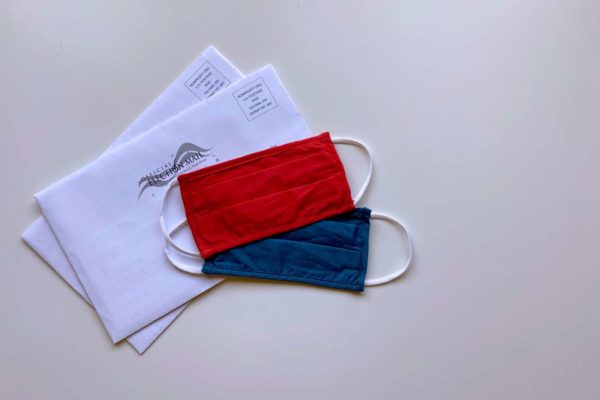 Job seekers have the chance to apply for a new seasonal gig. The Fairfax County Office of Elections recently announced it’s hiring more than 200 workers for the November election.

The positions came about because the elections office is expecting a significant rise in absentee voting this year, Brian Worthy, a Fairfax County spokesperson, told Tysons Reporter.

Applicants can apply to be considered for three various positions, according to the job listings.

About 200 people are needed to process mailed absentee ballots, starting around Sept. 28 and likely working until a few days after the election. Meanwhile, about 40 people will get hired to assist in–person absentee voters at satellite locations from Oct. 14-Oct. 31. A limited number of people are needed for the administration tasks like data input, which the job description did not include a timeframe for.

“Skills we are looking for are people who have attention to detail and basic computer skills,” Worthy said, adding that applicants must also be registered voters in Virginia. Other requirements and a detailed description of each position can be found online.

“For all positions, you are hired as a seasonal employee, paid hourly, and must go through a background check including fingerprinting. The work is seasonal with no benefits and is dependent on the election schedule,” the listing said, adding that most employees will be paid around $14 an hour. The opportunities are filled on a first-come, first-serve basis.

“We are still in the hiring process so we don’t have a count of how many positions have been filled yet,” Worthy said.

Anyone interested in applying can fill out an online Survey Monkey form. Applicants shouldn’t be surprised if they don’t hear back right away, Worthy said.

“The hiring process does take some time, so people might not hear back immediately,” according to Worthy, who added that he encourages people to apply early so they will have plenty of time to complete the onboarding process.

According to Fairfax County’s website, there are also openings for local election officers. The county said that it’s received roughly 10 times the normal number of applications for the election officer roles. 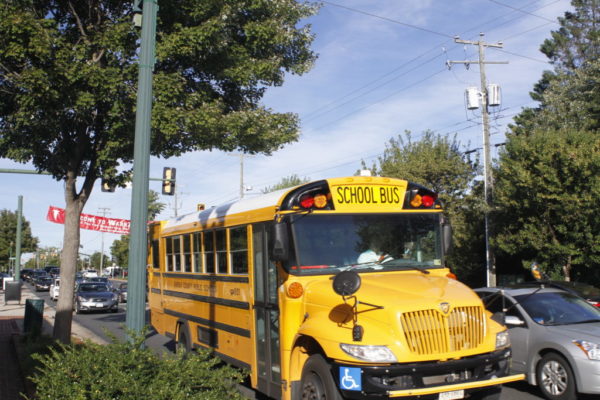 The job fair is scheduled to take place in two sessions, with the first running from 10 a.m.-2 p.m. and the second from 3-7 p.m.

People interested in participating are urged to learn about the school system, apply to open jobs and register for one or both sessions, which have attendance caps.

During the virtual job fair, job hunters will be able to chat one-on-one with HR or school representatives from FCPS.

FCPS has more than 90 job opportunities listed online. The majority of the open positions are for high school and middle school teachers. 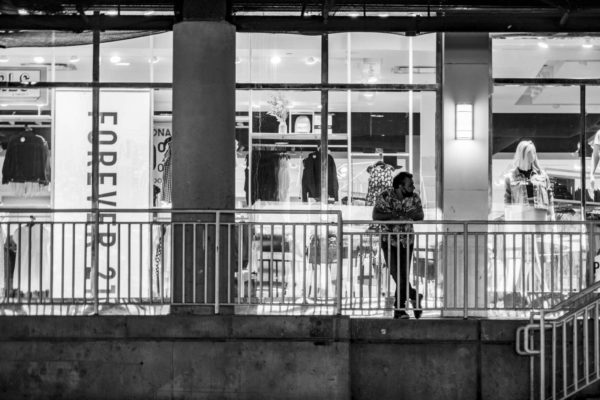 Education Secretary Betsy DeVos called out Fairfax County Public Schools for asking families to decide between fully remote instruction or two days a week in the classroom amid the pandemic. She called the district’s distance learning a “disaster.” https://t.co/sf40OQAuR8 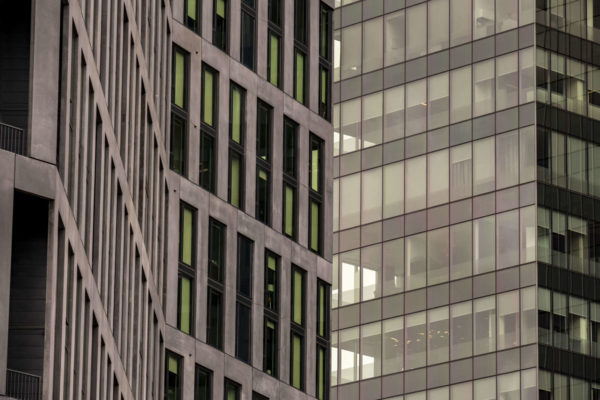 Hotels in the Tysons area laid off nearly 1,000 employees this spring due to the coronavirus pandemic.

Tysons Reporter found six hotels that filed notices under the Worker Adjustment and Retraining Notification (WARN) Act with the Virginia Employment Commission (VEC). The WARN Act requires businesses with 100 or more employees to provide at least 60-day notice of a closing or layoffs affecting 50 or more employees, according to the U.S. Department of Labor.

Here are the WARN notices that hotels filed between late March and June:

In total, 952 employees were laid off.

Most of the layoffs happened in March and April and were “due to COVID-19,” according to the WARN notices. 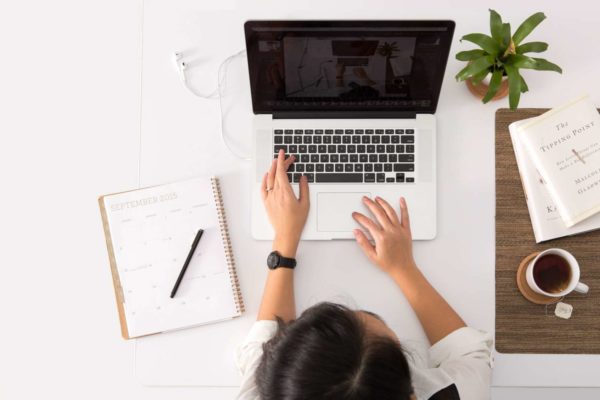 Two Tysons companies are among the 15 tech employers listed for an upcoming virtual job hosted by the Fairfax County Economic Development Authority.

The fair is targeted to mid-career tech professionals, especially ones with security clearances, and the companies represented will have a total of 3,000 open jobs in the Northern Virginia region, according to FCEDA.

“While the fair is primarily for those in tech fields including data science, software engineering, IT, cybersecurity, defense and aerospace, some companies are featuring non-tech positions such as marketing, sales, finance, human resources and legal,” according to FCEDA.

Companies signed up for the fair include:

“Every job represents a household, so when we connect people — whether newly minted graduates or those midway through a career — to thousands of open jobs, we are really improving lives, saving households and communities,” Victor Hoskins, FCEDA’s president and CEO, said in a press release.

People will be able to browse companies in a virtual lobby before entering “virtual booths” to view open positions and video conference with recruiters.

The job fair will be hosted on Tuesday, July 14, from 1-4 p.m. People can register online.

Photo by Avel Chuklanov on Unsplash 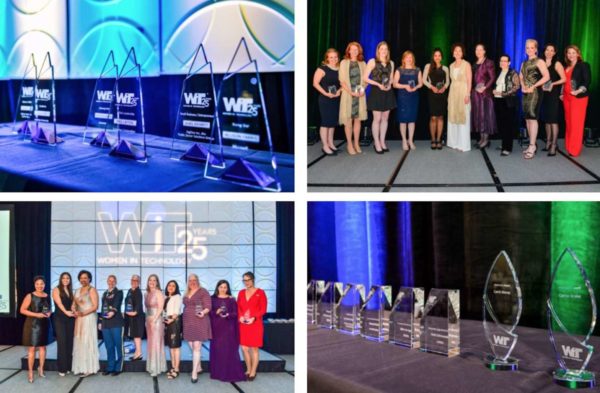 Though the prospect of looking for a career might be daunting during a pandemic, a Falls Church-based group is hosting a virtual job fair this week to help people looking for jobs in STEM.

Women in Technology, a group that aims to get women “from the classroom to the board room,” invites anyone seeking a job in the science, technology, engineering or math fields to an online event on Thursday (June 25) where they can network with hiring managers at various companies.

Registration is free for job seekers, the site said. The event will be held from 4-7 p.m. and people can register online.

All ages and experience levels, including students, are welcome, the page said, adding there will be roughly 15 exhibitors at the event.

Throughout the year, the organization will also host various awards ceremonies and training opportunities for women in the STEM field, the website said.

“The great thing is we can reach more people with this being virtual and additionally, no traffic nor weather to affect the participation numbers,” WIT member Cristine Gollayan said. “Many have lost jobs due to COVID and we are hoping that this fair will assist those in the community.” 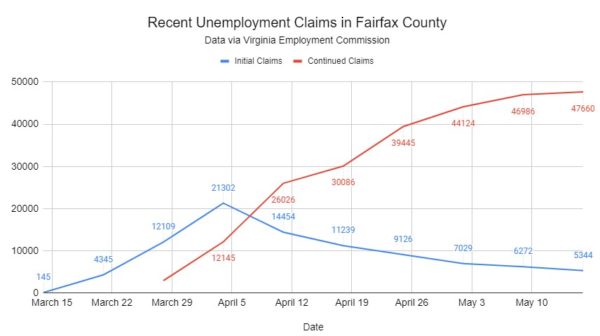 Roughly 5,300 initial unemployment claims were filed in the county for the week of May 16 — a drop from 7,000 during the week of May 2, according to the latest data from the Virginia Employment Commission.

Meanwhile, continued unemployment claims — now at 47,000 for the week of May 16 — are rising less quickly in the county. 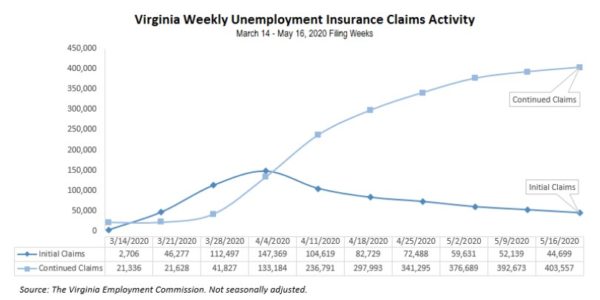 More from the VEC:

For the filing week ending May 16, the figure for seasonally unadjusted initial claims in Virginia was 44,699. The latest claims figure was a decrease of 7,440 claimants from the previous week. The weekly total was the lowest since before the initial spike in unemployment insurance claims during the March 21 filing week.

For the most recent filing week, continued weeks claimed totaled 403,557, up 2.8% from the previous week and 385,380 higher than the 18,177 continued claims from the comparable week last year.

VEC’s preliminary data indicate that the pandemic has hurt the accommodation and food service industry the most.

Workers in that industry “continued to see the greatest percentage of continued claims for unemployment benefits” for the May 16 filing week, VEC said. “Moreover, claimants in that industry comprised over a quarter of pre-pandemic payroll employment.” 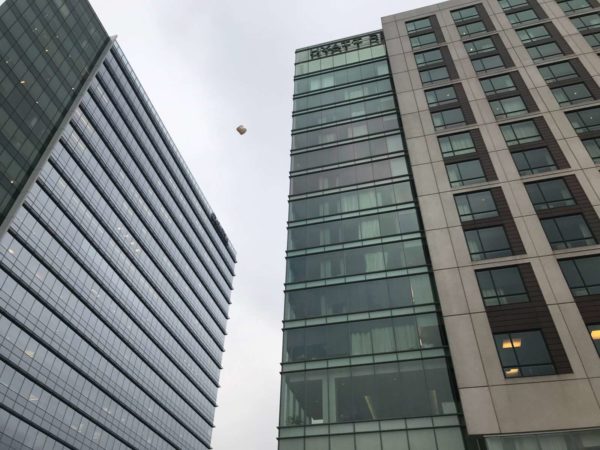 Virtual Job Fair for Recent Grads Next Thursday — “Participants will be able to browse companies in the lobby, enter their booths, view open positions specifically curated for recent grads, and chat with HR representatives in real-time.” [Brazen Connect]

First Child Case in Va. of Syndrome Tied to COVID-19 — “The Fairfax Health District has confirmed a case of Multisystem Inflammatory Syndrome in Children (MIS-C) associated with COVID-19. This is the first case of MIS-C reported in Virginia.” [Inside NoVa]

Summer Camps Canceled — “The Fairfax County Park Authority and the county’s Department of Neighborhood and Community Services have canceled 2020 summer camp programs due to the COVID-19 crisis.” [Tysons Reporter]