To prepare for the upcoming election, Tysons Reporter looked into how Board of Supervisor candidates in Fairfax County are funding their campaigns.

Both Democrats in the races for the Providence and Dranesville District Supervisor seats have much larger war chests than their Republican opponents by thousands of dollars.

Tysons Reporter took a look at where the donations to the four candidates’ campaigns are coming from.

Major donors include the Jefferson Village Association LP — real estate developers in Bethesda, Md. who have donated $25,000 — and Alison Georgelas, a managing consultant at IBM, with $5,000.

Palchik also received smaller amounts from individuals or organizations like the Fairfax County Professional Firefighters and Paramedics — IAFF Local 2068, who donated $1,500 and openly endorsed her.

Karl Frisch, who is running for the Providence District seat on the Fairfax County School Board, assisted Palchik with in-kind donations including campaign buttons costing $260.

According to the Virginia Public Access Project (VPAP), around $34,000 of Palchik’s campaign funds came from construction or real estate groups.

Besides political consulting, one of Palchik’s largest expenses was a $1,700 food tab at Inca Social for a fundraiser.

Republican Eric Jones only reported one $200 donation to his campaign from Andrew Finlayson, a retired veteran and member of the Republican Party in North Carolina. Jones told Tysons Reporter that he paid for the rest of his campaign expenses out of his own pocket.

Jones did not report any in-kind contributions and reportedly spent money on a P.O. box in Merrifield, political consulting and signage, among similar things.

Karen DuVal, who owned a McLean property connected to the War of 1812 and the Civil War, donated $3,500.

He also received $3,000 from Felipe Rodriquez, the CEO of Sterling-based Aeronautical Systems.

Back in September, Foust spent about $1,200 on photoshoot expenses and about $2,300 on the production and design of walk cards.

The election is Tuesday, Nov. 5.

People in McLean and Tysons have the chance to help others through a series of upcoming donation drives.

With the holiday season approaching, Toys for Tots has set up a drop-off area for toy donations in Tysons, while Soles4Souls will collect gently used shoes in McLean.

Toys for Tots is organized through the United States Marine Corps to help struggling families afford Christmas gifts for their children. Around 97% of proceeds go to families in need, according to the website. The remaining 3% covers administrative costs.

Anyone wishing to donate toys can bring them to Meineke Car Care Center (1524 Spring Hill Road). The last day for donations to Toys for Tots is Dec. 12.

Soles4Souls is a non-profit based in Nashville that fights poverty, according to its website.

Shoes will be accepted at the Joy Deevy Relator Office (6849 Old Dominion Drive, Suite 400) until Dec. 1. 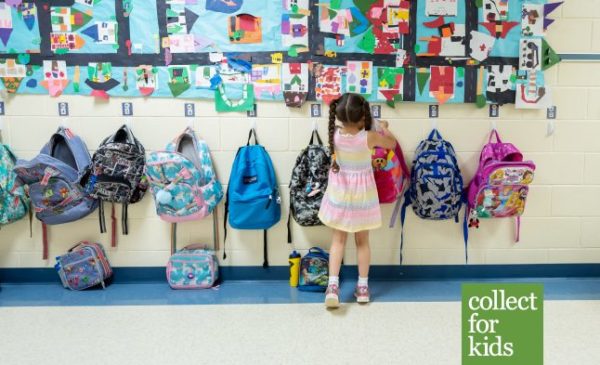 For the nearly 56,000 students in Fairfax County Public Schools living at the poverty line, obtaining school supplies can be difficult.

In an attempt to change this, FCPS is partnering with roughly 20 nonprofits and businesses to ensure that students will have the supplies they need this fall for its “Collect for Kids” campaign.

“Every school in FCPS is touched by need — some schools have as little as 1% of their students in need, while others have over 80% of students in need,” Kathy Ryan, an FCPS spokeswoman, said.

Community members can drop off new backpacks to various locations in the Tysons area, which FCPS will then hand out to kids for the start of the school year in August.

Backpack drop off locations include any Apple Federal Credit Union, the FCPS Gatehouse Administration Center (8115 Gatehouse Road), and a few other places. Some in the greater Tysons area include:

FCPS also has a goal to raise $25,000 dollars — monetary donations are accepted online.

“Increasing the awareness of the number of students in FCPS that need this yearly support is also a goal,” Ryan said. 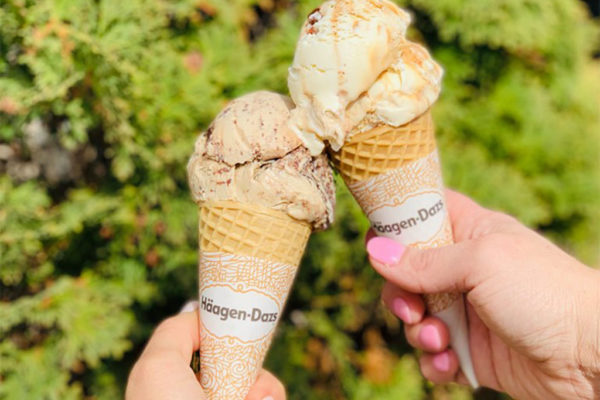 If you didn’t get your ice cream fill on Free Cone Day at Ben & Jerry’s, you can stop by Häagen-Dazs tomorrow (Tuesday) for more.

The event also serves as a promotion for the chain’s Häagen-Dazs loves Honey Bees Initiative, a fundraising effort to develop solutions for Colony Collapse Disorder, which is placing the future of the food chain at risk. Donations to the fundraiser can be made online.

‘Stuff the Bus’ on Track for Huge Haul — “By the time this year’s Stuff the Bus concludes on Feb. 18, the county expects to surpass 250,000 pounds of collected food.” [Fairfax Times]

Snow May Snarl Tuesday PM Commute — Per Fairfax County: “If you plan on commuting Tuesday evening, be aware of the potential for travel disruptions. Plan ahead by allowing for extra travel time, and consider using public transportation and telework options.” [Twitter, National Weather Service] 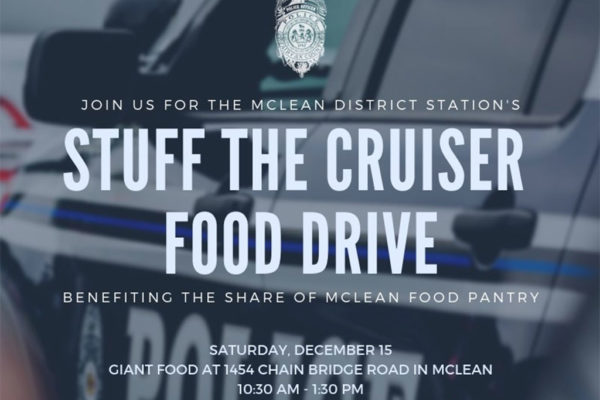 This Saturday, the McLean Police District Station is hosting a “Stuff the Cruiser” food drive.

The cruiser will be located at the Giant Food at 1454 Chain Bridge Road. The idea is to bring enough food and other goods to fill one of the Fairfax County Police Department’s cruisers. The supplies will be donated to the Share of McLean Food Pantry.

Share of McLean is a nonprofit organization established in 1969 to meet the needs of those less fortunate in McLean and surrounding Northern Virginia localities. The organization is all-volunteer and relies on donations. In addition to the food pantry, the organization also collects clothes and furniture to give to those in need.

According to their website, the organization distributes 700 bags of groceries and 200 bags of clothing each month.

If you are unable to attend the food drive on Saturday, the organization also accepts food donations at the McLean Baptist Church on 1367 Chain Bridge Rd, Wednesdays through Saturdays from 9:30 a.m.-12 p.m.

McLean HS Student Struck By Elderly Driver — “A female McLean High School student was injured Oct. 12 after being struck by a vehicle on Westmoreland Street in McLean, Fairfax County police said. The incident occurred around 5 p.m. as the student was using a crosswalk to cross Westmoreland Street near Old Chesterbrook Road.” [InsideNova]

Secret Sleigh Project Accepting Applications — “Does your child have a medical diagnosis that limits their ability to get outside, especially during winter months? Do they enjoy seeing Santa Claus (and perhaps Mrs. Claus, elves, and carolers?) Contact us for an application to have Santa come to your home and visit your child before Christmas.” [Facebook]

Big Donation for McLean Private School — “The Potomac School’s upcoming Center for Athletics and Community has garnered one of the largest gifts in school history. The Spangler family made the $12 million donation… for the new athletic center.” [Patch]

ARTSFAIRFAX Disability Workshop — Local arts group ARTSFAIRFAX is holding a free workshop on Nov. 1 to discuss how to best serve audiences with disabilities. The event is being held from 11:30 a.m. to 1 p.m. at 1st Stage in Tysons. [McLean Connection, ARTSFAIRFAX]