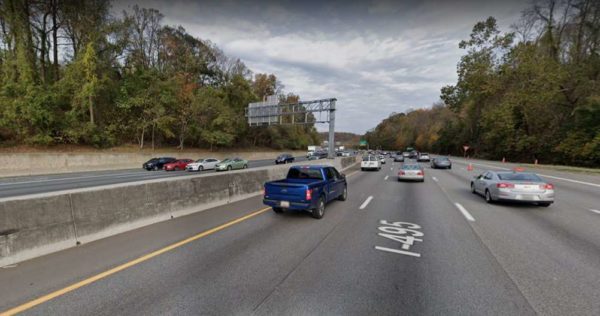 Updated at 4:10 p.m. on 5/21/2021 — The Commonwealth Transportation Board unanimously approved the resolution to designate the 495 NEXT lanes as high-occupancy toll lanes during its meeting on Wednesday (May 19).

Earlier: Plans to extend the I-495 Express Lanes from the Dulles Toll Road to the American Legion Bridge are about to inch a little closer to a reality.

The Commonwealth Transportation Board’s meeting agenda for today (Wednesday) includes a vote on whether to designate the Virginia Department of Transportation’s I-495 Express Lanes Northern Extension (495 NEXT) project as high-occupancy toll lanes.

The move would pave the way for 495 Express Lanes operator Transurban to expand its operations into McLean past George Washington Memorial Parkway, if VDOT’s plans to widen the interstate with two dedicated travel lanes in each direction materialize.

VDOT’s Northern Virginia Megaprojects Office, which is handling the 495 NEXT project, told Tysons Reporter that it expects the Federal Highway Administration to issue a decision on the Environmental Assessment by the end of May 2021.

“A final project agreement between VDOT and Transurban, or commercial close, is expected in August 2021, followed by the project’s financial close in December 2021,” VDOT said.

In addition to formally designating the proposed lanes as HOT lanes, the CTB vote will establish a high-occupancy requirement of three or more individuals and authorize Virginia Commissioner of Highways Stephen Birch to develop a new memorandum of understanding with the Federal Highway Administration to govern the extended lanes.

According to the resolution, if approved, the HOT lane designation will officially take effect once a “Service Commencement Notice to Proceed” is issued, meaning the lanes are opened for public use, which VDOT now says it doesn’t anticipate happening until 2025.

VDOT is asking the CTB to approve the resolution in anticipation of amending an agreement that it originally signed on Dec. 19, 2007 with Transurban, which has operated the existing 14 miles of 495 Express Lanes since they opened in 2012.

Like its MOU with the FHWA, VDOT’s agreement with Transurban needs to be revised to include the two miles of lanes that would be added with the 495 NEXT project.

As with the existing express lanes, the tolls for the new lanes will likely be determined using congestion pricing, which fluctuates based on the number of vehicles on the road at a particular time, according to the resolution.

The 495 NEXT project has been in the works since late 2019, when Virginia Gov. Ralph Northam and his Maryland counterpart, Larry Hogan, announced an accord to replace the American Legion Bridge and widen the Capital Beltway to relieve traffic congestion.

The project has been endorsed by local chambers of commerce and, more recently, the Fairfax County Board of Supervisors, but many community members and officials — including members of the county board — have expressed concerns about the potential environmental impact and the prospect of Maryland failing to follow through on its half of the Beltway accord.

The Maryland Department of Transportation decided last week to shrink the scope of its I-495/I-270 HOT lanes project, opting to focus on the western section that includes the American Legion Bridge.

Officials said the move will allow the project to move forward more quickly, since it cuts out a large portion of the design that drew strong opposition from residents and local leaders in Montgomery County.

In a statement to Tysons Reporter, the VDOT Northern Virginia Megaprojects Office says it will continue to work with Maryland “to coordinate our two projects”:

Maryland’s announcement regarding the state’s modified approach for their environmental document indicates Maryland’s continued focus on the American Legion Memorial Bridge (ALMB) and the I-495 segment between the ALMB and the I-270 Spur. The new recommended preferred alternative (RPA)  by Maryland and FHWA, known as Alternative 9, Phase 1A South, includes the same two HOT managed lanes in each direction on I-495 that were in Maryland’s previous RPA, and is compatible with Virginia’s 495 NEXT project.