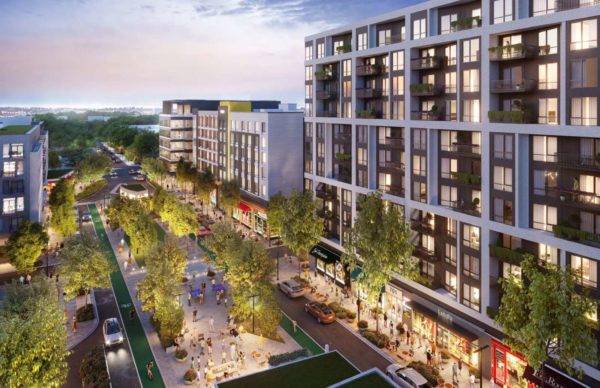 Falls Church is looking to set up a new governing authority to handle some of the finances for its ambitious West Falls Church Economic Development Project — a new mixed-use development the city hopes can rival the nearby Mosaic District in Merrifield.

The new Community Development Authority (CDA) will be financially-focused, aimed at administering the bonds and debt service for local projects, as well as imposing special taxes on businesses within its zone.

The West Falls CDA will be the first of its kind created in Falls Church, though similar CDAs are in place in Ballston Quarter in Arlington and for the Mosaic District in Fairfax.

“A CDA can finance such projects by issuing bonds and then requesting that the locality impose special taxes or a special assessment on properties in the district to pay the debt service on such bonds,” city staff said in a report. “This ordinance is before City Council for creation of the CDA only, and bond issuance will require further Council approval down the road.”

Staff presented an overview of the proposal to the Falls Church City Council during its work session on Monday (May 17).

City Manager Wyatt Shields explained that community development authorities result from property owners petitioning their local government to create the organization, generally so that they can “gain public improvements” within the specific district where they are located.

In the case of the potential West Falls CDA, the petitioners are the future leaseholders of the site, which is currently owned by the City of Falls Church. That includes Falls Church Gateway Partners, the developer group comprised of EYA and Hoffman & Associates.

“There would be a special assessment paid only by those who live in that special district to pay for those public improvements,” Shields said. “There is no tax impact for taxpayers who live outside the district.”

The plan for the West Falls Church Economic Development Project is to create a sprawling mixed-use area with a residential component as well as 123,000 square feet of retail anchored by a grocery store, office space, and a hotel.

The report says the intent is for the CDA to issue $12 to $15 million in bonds that would kickstart some of the planned infrastructure improvements and fund under-grounding utilities.

The CDA will be managed by a five-member board appointed by the city.

The proposal is scheduled to go to a public hearing on Monday (May 24) before returning to the city council for final approval on June 28. If approved, the CDA would start meeting in July, with bond sales beginning February 2022.

END_OF_DOCUMENT_TOKEN_TO_BE_REPLACED

More Stories
State transportation board to vote on extending I-495 toll lanes agreement to American Legion BridgePet of the Week: Silver