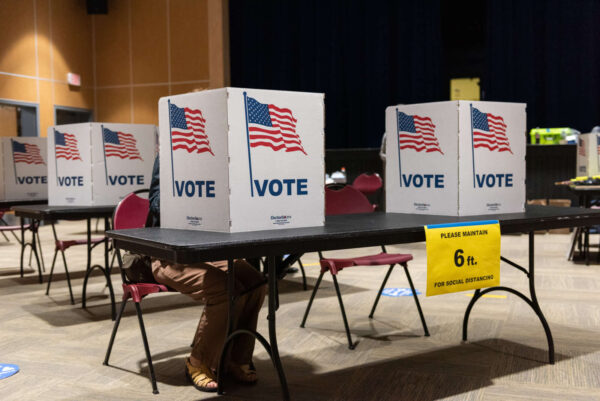 (Updated at 11:10 a.m.) The Town of Vienna’s election concluded yesterday (Tuesday) with all three incumbent councilmembers in contention retaining their seats.

Howard Springsteen, Steve Potter, and Nisha Patel were comfortably reelected in an election that saw turnout plummet after hitting a record high last year, when there was a mayoral race on the ballot and seven candidates vying for three town council seats.

This time, there were just four candidates competing for three seats, with Springsteen seeking his sixth term on the council and Potter and Patel looking to get reelected for the first time. Planning Commissioner David Patariu was the sole challenger.

In a statement to Tysons Reporter, Springsteen thanked voters for the support and vote of confidence.

“I am honored to serve and will always be available to Vienna residents to discuss issues of concern,” he said. “Congratulations to Steve Potter and Nisha Patel on their reelection to council. I look forward to working for the betterment of Vienna.”

In a Facebook post acknowledging the election’s results, Patariu says that, while he fell short of winning office, he believes his campaign helped bring attention to key issues, such as traffic on residential streets, the slow progress on funding sidewalk construction, and complaints about the town’s mulching operation on Beulah Road.

According to the Fairfax County Office of Elections, which managed the election, the unofficial vote totals are:

The results will be finalized after noon on Friday (May 7), when any remaining mailed ballots must be received.

1,968 out of 11,659 registered voters cast ballots in the election, amounting to a 16.9% turnout compared to the 36.5% of voters who participated in last year’s town election. 1,311 voters went to the polls in person on election day, while 657 people voted absentee, either by mail or in person.

Turnout for Vienna’s elections typically fell anywhere from 5% to 23% before the May 2020 election, which served as a prelude to a general election in November that also saw robust participation.

This election was notable, however, for being the last one that the Town of Vienna will ever hold in May. A bill passed by the Virginia General Assembly in February and signed by Gov. Ralph Northam on March 12 shifted all municipal elections in the state to November, starting on Jan. 1, 2022.

State Sen. Chap Petersen, who represents Vienna, and some town leaders took issue with the change, arguing that separate, town-only elections allow voters to focus on local issues, but the Fairfax County Office of Elections says the move will increase voter participation and save Vienna money, since the town currently has to reimburse the county for some election-related costs.

“The Turnout in future elections held in November will be much higher — as much as four-fold,” Fairfax County General Registrar Scott Konopasek told Tysons Reporter by email. “Whether or not that will change winners and losers remains to be seen.”