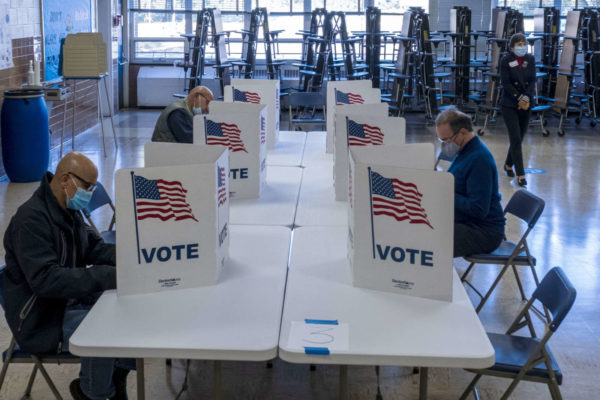 600,238 voters – or 78.8% – of Fairfax County’s 761,573 active registered voters participated in this year’s general election, more than two-thirds of them absentee in Virginia’s first election with no-excuse absentee voting.

Based on unofficial results from the Fairfax County Office of Elections, that likely sets a record for the most votes cast in an election in Fairfax County history, but the turnout rate falls short of the 2012 and 2016 general elections, which both had rates of 80.5% and 82.5%, respectively.

“This election year was unlike any other we have ever seen,” Fairfax County Board of Supervisors Chairman Jeff McKay said. “Our turnout throughout the process was truly encouraging and spoke to our residents’ faith in the democratic process.”

Of the county’s nine districts, Hunter Mill had the highest voter turnout for the 2020 general election.

The gap between absentee voting and in-person Election Day voting was particularly wide in Providence District, where 50,814 of the district’s 87,100 active registered voters cast in in-person or by-mail absentee ballot and only 17,117 people voted on Election Day.

While the election results will not be official until they are certified on Nov. 16, all ballots are now in after the deadline for absentee ballots to be returned came at noon on Nov. 6.

The City of Falls Church, which held a special election to fill a vacant city council seat, saw a record turnout with 8,879 votes, though the 83.3% turnout rate fell short of the record 87.4% of active voters who cast ballots in the 2012 general election.

After Election Day, the city counted an additional 68 absentee ballots from drop boxes, by mail, and as federal write-ins, and officials accepted 25 provisional ballots, according to Falls Church City director of elections and general registrar David Bjerke.

Debora Schantz-Hiscott won the city council special election with 54% of the vote.

“We have a lot of work ahead. But I am excited for this opportunity,” Schantz-Hiscott said in a guest post for the Falls Church News-Press. “As we face tremendous uncertainty in our nation, it will take a village to see us through this crisis. Here in Falls Church City, I am certain we will rise to this occasion together.”

Read more →
More Stories
Kindergarten Drives Enrollment Drop, but FCPS Braces for Spike in ReturnsWays to Give Back This Holiday Season