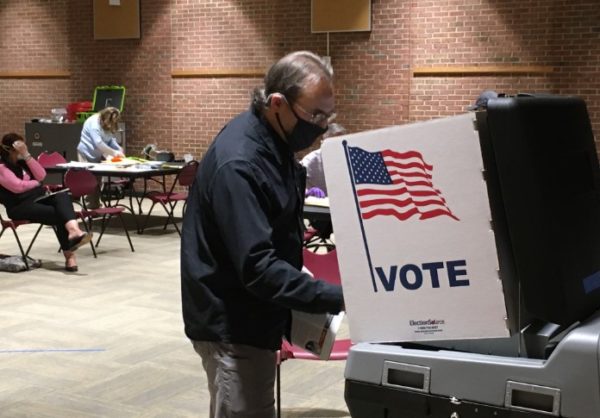 The Town of Vienna’s election is underway, and voters have less than four hours to vote in-person or drop off their ballots.

As masked voters file into the Vienna Community Center or drive to the  Fairfax County Government Center to drop off their ballots in a special box, Tysons Reporter is exploring what civic duty looks like during a pandemic.

Voter turnout has typically fluctuated between 5% and 23% for the town’s elections for the last 20 years. But that may change this year.

“Traditionally, for municipal elections, it’s hard to get a good turnout,” Councilmember Howard Springsteen, who is running for the mayor’s seat, told Tysons Reporter.

Starting in March, Fairfax County officials took to social media to encourage Vienna voters to use the “disability or illness” box when requesting absentee ballots, hoping that mail-in ballots would decrease long lines for in-person voting.

The reminders worked. Vienna voters requested more than 3,200 absentee ballots, according to the town.

There are roughly 11,800 registered voters in the town, according to the state election department. If all of the absentee ballots are completed and submitted, that would put the voter turnout percentage around 27% — not including in-person voting.

“I think voter turnout will be higher than we’ve had in a while,” Mayor Laurie DiRocco told Tysons Reporter.

Signs of the times for voting in the time of a #pandemic. Voters will find these floor markers and signs at the polls in Vienna & Clifton today. Polls close at 7 p.m.#viennava #cliftonva #election2020 #covid_19 #COVID19 #socialdistancing #fairfaxcounty #virginia pic.twitter.com/Cw4wwP2LPr

Voters weren’t the only ones urged to do their civic duty by voting from home.

DiRocco, who is retiring when her term ends this June, told Tysons Reporter on Friday that she asked all of the candidates to stay away from the Vienna Community Center today (Tuesday) to reduce the risk of spreading the virus.

In previous years, it has been “very much of a social gathering,” according to DiRocco, who added that people would bring picnics and socialize with one another outside of the 40-foot distance line as people prepared to vote.

“I had reached out to the candidates and recommend we do not show up at the election,” DiRocco said. “All of the candidates agreed to that, which I thought was really good.”

But DiRocco sounded frustrated when she told Tysons Reporter that she received messages from people this morning “who were a little nervous” because they spotted mayoral candidate Pasha Majdi outside the Vienna Community Center.

“I don’t know what else to say at this point,” DiRocco said, stressing that it’s important to respect public health and safety concerns for voters.

Majdi told Tysons Reporter that he was about 300 feet away from the community center — “I could not throw a football from across the street.”

“We thought it would be a nice gesture to thank people for voting by waving from across the street, several hundred feet [away] from the polls,” he said.

The decision of whether or not to stand outside the polling place was never a dilemma before the pandemic, and it is not the only issue that candidates recently faced as Northern Virginia’s coronavirus numbers continue to rise.

Many of the candidates responded to Tysons Reporter’s inquiry about how the pandemic changed their campaign strategy, saying that social media has played a larger role in getting their messages out.

“My team of supporters and I had to change the game plan,” mayoral candidate and current Councilmember Linda Colbert said.

Colbert said that she started her campaign this year with the goal of getting to “every house in Vienna.” Instead, she ended up writing a letter to every resident instead.

Traditional face-to-face methods of interacting with voters — going door-to-door, attending events and handing out campaign literature — are moot while social distancing guidelines and the stay-at-home order are in effect.

“Voters in Vienna appreciate it when candidates knock on their doors and take a few minutes to answer questions before leaving a pamphlet,” Roy Baldwin, a councilmember candidate, said. “Since early March, none of that has been possible — the last thing I would want to do would be to either pick up or unwittingly spread the coronavirus by such close contact.”

Baldwin said that this campaign is “certainly nothing” like the one he ran in 2016.

“I’ve gone to the phone a lot more, and to email, text messages, and Facebook posts, as well as traditional mailers and print ads,” he said, adding that he’s even done Zoom conferences.

Ray Brill Jr., a councilmember candidate who said face-to-face “was to be the cornerstone of my campaign,” said that he pivoted to social media, word-of-mouth, signs and mailings to reach voters.

Brill also said that sharing his message through candidate essays, like he did for Tysons Reporter, “gave voters the opportunity to compare and contrast each candidate’s position on key issues facing the Town of Vienna so they could make an informed decision before they voted.”

“I much prefer face-to-face. I don’t think you have a dialogue with people on social media,” Springsteen, who is running for the mayor’s seat, told Tysons Reporter. “I don’t get a lot of feedback [from voters].”

He said that he’s relied on boosting Facebook posts and sent out two mailings — a letter and a postcard — this year, adding that he’s put out fewer yard signs to reduce in-person contact.

While he said he’s “getting a lot of hits on my website,” he said that posting online can feel like putting a message out into a void.

Limited traditional campaigning tactics have forced some candidates to get creative.

“I have no idea if it will translate into votes, but my daily bike rides with the Choose Chuck velocipede has at least brought smiles to people’s faces,” councilmember candidate Chuck Anderson said.

Anderson noted that he keeps “at least 20 feet” away from people while on his bike rides down the middle of the street.

“With a number of neighbors strolling the streets, I have been able to get my name out, at least, to a large number of voters,” he said.

“One day I posted a video expressing my concerns for town residents and businesses,” Colbert said. “After receiving positive feedback, I did it another day until I was doing it every day.”

Some of the biggest COVID-19 challenges have impacted the candidates’ jobs more than their campaigns.

“My day job is dealing with the coronavirus,” councilmember candidate Ed Somers said. “So I’m certainly busier in my day job… I think the challenge is the balance of doing what I need to do for work and doing the outreach I need to do for the campaign.”

Majdi shared a similar sentiment, saying that he shifted his focus away from the campaign more to his duties as a current councilmember.

“Campaigning has taken a back seat to the COVID-19 response,” Majdi said. “The top priority is public health and safety.”

Still, Majdi is talking to voters over the phone, and Somers is relying on his network to vouch for him.

“I’ve found [the campaign] to be a good experience,” Somers said, adding that he thinks online communication has “made us more authentic… [since] we’re going more off our instincts.”