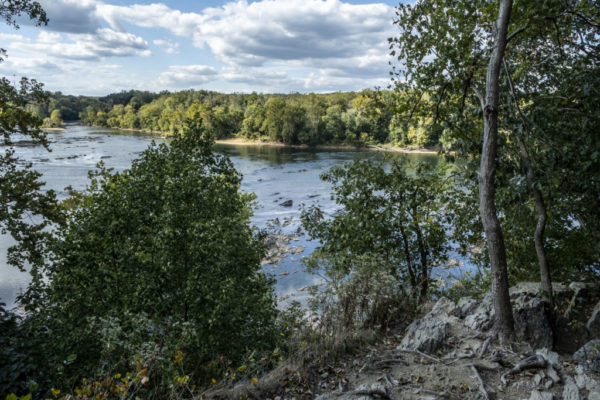 Fairfax County and the Virginia Department of Transportation are working on an agreement to include funding for Scotts Run Stream restoration efforts in McLean as part of the I-495 Northern Extension (495 NEXT) project, Fairfax County Board of Supervisors Chairman Jeff McKay said on Tuesday (Feb. 23).

McKay shared the news in a letter to Virginia Secretary of Transportation Shannon Valentine that reiterates some of the county’s lingering reservations about the project, which seeks to extend the I-495 Express Lanes approximately three miles from the Dulles Toll Road interchange to the American Legion Bridge.

“In conjunction with the stream restoration project planned by the County, the additional funds received from the I-495 NEXT concessionaire will provide a more holistic approach to stream restoration that helps promote streambank stabilization, enhanced outfalls, and an overall improvement to Scotts Run,” McKay said in the letter, which was unanimously approved by the full board during its meeting.

The board raised concerns about the environmental impact of 495 NEXT, among other issues, in a letter to Valentine in early December, stating that runoff from the proposed project would affect almost 100 acres of wetlands, water, and land around Scotts Run and the Potomac River and exacerbate flooding issues in McLean.

The potential Scotts Run agreement and Maryland’s announcement last week that it has chosen a consortium led by Tysons-based Transurban for its Capital Beltway toll roads project have eased some — but not all — of Fairfax County supervisors’ anxieties about 495 NEXT.

Urging VDOT to coordinate with its counterpart across the Potomac as closely as possible, Dranesville District Supervisor John Foust noted that, while last week’s announcement was a meaningful step forward, the actual realization of Maryland’s I-495/I-270 project remains far off.

“We have gone on record as saying that [495 NEXT] does more harm than good if we don’t get Maryland to move forward with their project,” Foust said. “They are making good progress. What happened last week, I think it was good news and very exciting, but they’re still not there yet.”

He also asked that McKay’s letter be amended to request more detailed renderings of planned ramps for the Dulles Toll Road interchange from VDOT, reiterating previously voiced concerns about the possible traffic and construction impacts on surrounding communities.

In addition, the Board of Supervisors wants VDOT to extend the shared-use trail included in the 495 NEXT project to Tysons, rather than ending it at Lewinsville Road, and fully fund one of the Tysons-Bethesda bus routes that have been proposed as a transit option for the I-495/American Legion Bridge corridor.

According to the board’s letter, the route would carry nine vehicles with an estimated initial cost of $5.2 million and annual operating costs of $2.2 million.

Springfield District Supervisor Pat Herrity cautioned against making too many demands of a project that already carried an estimated $500 million cost as of last March.

“Those requirements get paid by someone. They don’t get funded out of thin air,” Herrity said. “…Since these are just recommendations, I’m going to be supporting the letter, but I think we’ve got to be careful that we don’t push this project out of existence.”

Supervisor Walter Alcorn, who represents Hunter Mill District, said county leaders need to make their concerns about major projects like this known, especially since a private vendor will be involved.

“We have to make sure that the public interest and the environmental issues and everything else that’s important to the broader community is paramount,” Alcorn said.

VDOT issued the following statement to Tysons Reporter in response to the Board of Supervisors’ letter:

VDOT remains committed to continuing to work with the Fairfax County Board of Supervisors to listen to and address their feedback on VDOT’s I-495 Northern Extension Express Lanes Project. The issues identified by Fairfax County are important to VDOT and will continue to be an important part of the dialogue as we work together to solve one of the Washington Metropolitan Area’s most congested transportation links. Through the continued collaboration among the staff of VDOT and Fairfax County, VDOT is confident that a multimodal transportation solution can be put in place, which will improve travel and make a positive impact on our Commonwealth.