In response to a new wave of public feedback, Fairfax County staff has revised its drafted plan to revitalize the McLean Community Business Center.

The changes include harder caps on building heights, guarantees for syncing development to public school capacity, and more specific environmental requirements — all concerns that some community members and civic associations have recently raised.

Staff discussed the changes during a virtual open house on Saturday (Feb. 20).

The draft plan is currently under review as it winds through county processes. It will go before the Fairfax County Planning Commission for a public hearing on Apr. 28, followed by a May 18 Board of Supervisors meeting when county leaders will vote on whether to adopt the plan.

“We were encouraged to see the proposed changes to the maximum heights by zone and that the plan would spell out the maximums in linear feet, reducing the allowable height of the land parcels that abut Franklin Sherman Elementary School along Chain Bridge Road to 40 feet,” Right Size McLean member Linda Walsh said.

Walsh says the group was also glad to see that the new draft sets stronger environmental goals, especially for tree canopies and stormwater quality and quantity.

The McLean CBC study process began in 2018 when consultant StreetSense worked with members of the McLean community to draft a 10-year “Vision Plan.” Since then, a task force appointed by Dranesville District Supervisor John Foust has worked with county staff to create a Comprehensive Plan spanning 25 years.

According to Foust, task force members, and staff, downtown McLean will become a vibrant, biking- and walking-friendly downtown that creates a real sense of place. The plan envisions a total of 3,850 residential units in the district as well as traffic pattern changes and streetscape updates.

The community business center will be divided into three zones: Center, General and Edge, with corresponding heights for each. The most recent draft does not change height caps for buildings in each zone, but it does specify maximum heights in feet as opposed to the number of stories.

Buildings cannot exceed 92 feet (or seven stories), although one building in the Center zone will be allowed to reach 128 feet (or 10 stories). The developer who is awarded the tallest building will be responsible for creating the two-thirds-acre public plaza envisioned in the plan. 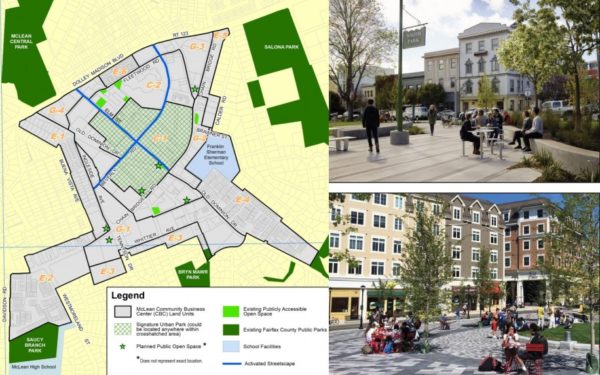 General zone buildings surrounding the Center zone can reach 68 feet (five stories). The county did not make any changes to the Edge zone in the most recent draft.

“I’ve asked staff to include maximum height in feet and for the maximum to be inclusive of the bonus density associated with workforce and affordable housing units,” Foust said during the open house. 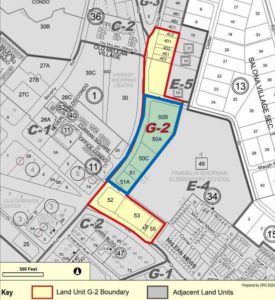 Near Franklin Sherman Elementary School, which is located in the Edge zone and bordered by buildings in the General zone, staff may limit building heights further to 40 feet. This is the current maximum allowed under by-right development, staff said.

Staff has not altered the projected maximum number of 3,850 residential units. That is up from the Vision Plan, which estimated a total of 2,175 units. As of 2020, 1,280 units have been developed.

The new plan gives tree canopies and vegetation new weight as natural components that contribute to environmental preservation. Additionally, stormwater management and green infrastructure requirements will be strengthened, he said.

The new draft also requires county staff and Fairfax County Public Schools to conduct a school capacity assessment once 50% of the residential development inside the Center and General Zones is approved or constructed.

Walsh says Right Size McLean will continue to push for a lower cap of maximum residential units within the CBC and lowering the allowable height to 40 feet for buildings along Corner Lane and adjacent to Franklin Sherman’s schoolyard. The group will meet Thursday evening to discuss its next steps.