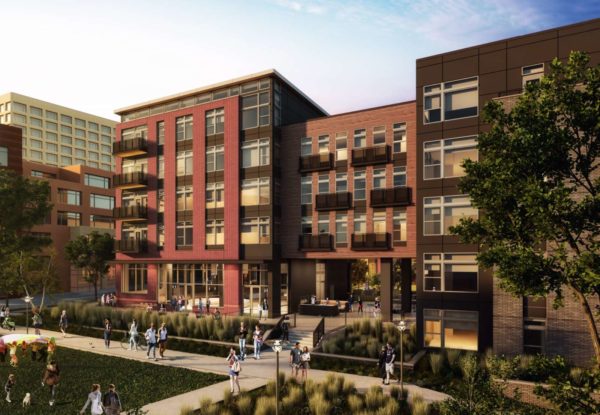 Developer KETTLER announced the day before Halloween that it has broken ground on the next stage of an ambitious development plan called The Mile.

The Mile is an approved project that will transform a 45-acre area of underutilized space northwest of Tysons Galleria. Brentford, the second phase of the development, will be a 411-unit mid-rise apartment community advertised as being in walking distance from major employers, world-class shopping, restaurants, and entertainment.

“As a business operator in Tysons, our company has felt the positive impact that redevelopments have had on our community,” KETTLER President Cynthia Fisher said. “We’re thrilled to be leading this transformational project in partnership with PS Business Parks as we begin construction on Brentford at The Mile.”

In a press release, KETTLER states that the Brentford apartments will offer “stylish, nature-inspired floor plans, with highly amenitized interior spaces and larger units such as 3 bedroom apartments and 2-story townhomes.”

With its first units expected to be completed in spring 2022, Brentford will be located near Highgate at the Mile, an apartment building with Republik Coffee Bar on the ground floor (7915 Jones Branch Drive) that represented the first part of KETTLER’s plan for The Mile.

During the project’s approval process, the Fairfax County Board of Supervisors praised The Mile for featuring a natural, 10-acre green space around Brentford and Highgate at The Mile. The first stage of the plans includes a publicly accessible dog park at the location.

“Residents of The Mile will feel the ease of suburban living, just minutes from the ‘Bustling Boro’ and Tysons Corner Center,” KETTLER said.