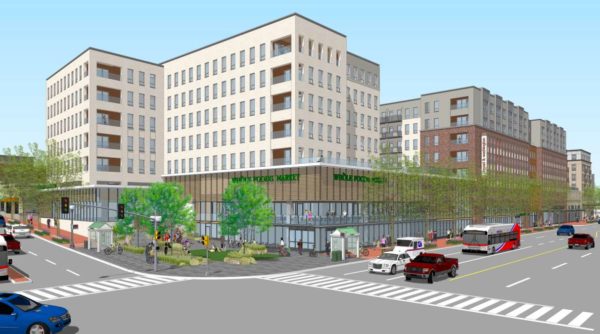 After an earlier deferral and walking tour, a planned mixed use development dubbed the Broad & Washington Project is headed back to the Planning Commission tomorrow for a work session.

“Planning Commission is requested to hold a work session to discuss the Broad and Washington mixed-use development proposed at the intersection of East Broad and North Washington Streets on approximately 3.16 acres of land including the City Lot on Park Place,” staff said in a report.

The Planning Commission work session is scheduled for tomorrow (Wednesday).

The proposed seven-story development would include 339 multifamily apartment units above a Whole Foods, theater, and other retail options.

The meeting is not planned to include a recommendation to the City Council, but will instead focus on discussion. The project has already stirred considerable controversy in the community, with a public comment page times longer than the staff report.

The public comment submitted in advance of the work session was almost unanimous opposition to the project. Much of the opposition was concern about the loss of parking for nearby local businesses, like the State Theater, during construction and concerns that the replacement spots in the new underground parking garage won’t be equivalent to what is lost.

According to Fred Bonner, a local resident:

I would like to urge you to not agree to sell the municipal parking lot as part of the Broad and Washington Streets project. I have been following the development of the project over the past few years and my impression is that most of the changes have been detrimental from the city’s perspective, primarily making it mostly residential. While there are still reasons to accept the overall project, I do not believe losing the municipal lot is necessary or good for the city. The developers offer to ‘replace’ the spots in their underground garage cannot be considered equivalent, and the loss of those spots during the construction and after will be devastating to Thompson’s, Clare and Dons and the State Theater.

Several other local residents argued that eliminating the lot would harm local establishments like Clare and Don’s.

The plan has already been through several updates that increased the shared public parking and dedicated residential parking at the site. A staff report noted that while there have been changes, concerns from local businesses remain for how changes to interim parking could affect customers during construction.

“65 offsite parking spaces are provided at 107 and 111 Park Place, within 800 Feet of City Lot, while public parking is unavailable onsite during construction,” the staff report said. “The previously proposed 6 to 8 months period of offsite parking was reduced to 3 to 6 months; in terms of adjacent business support, the latest comments received from Thompson Italian and Clare & Don’s detail concerns they have about how the project, particularly the construction period, will adversely impact their business.”