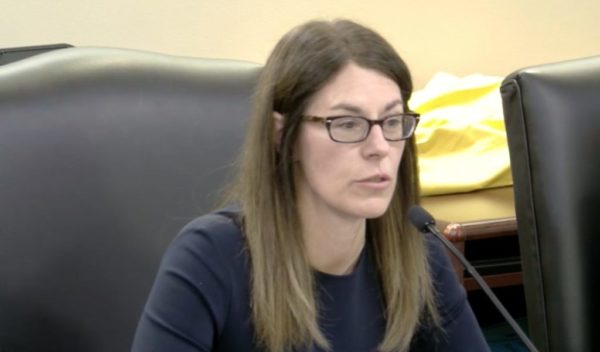 Former Vienna Mayor Laurie DiRocco got a shout-out from the Fairfax County Board of Supervisors during its regular meeting today (Tuesday).

Led by Chairman Jeff McKay and Hunter Mill District Supervisor Walter Alcorn, the board adopted a resolution recognizing DiRocco for her 17 years of service to the Town of Vienna, a tenure that included stints on the town council, planning commission, and transportation safety commission prior to her three terms as mayor.

“It’s been a pleasure to serve the town of Vienna, and I know it’s in capable hands now,” DiRocco said when accepting the recognition.

DiRocco first became mayor in 2014, when she was appointed to the position following the death of Mayor Jane Seeman before winning an election for the seat later that year.

As mayor, DiRocco prioritized enhancing Vienna’s environmental sustainability, walkability, and financial responsibility. She oversaw the construction of a new community center and the installation of a mini-roundabout at Park and Locust Streets to help relieve traffic backups.

DiRocco announced last December that she would not seek a fourth term as Vienna’s mayor, completing her final term on June 30.

In their joint board matter requesting the proclamation for DiRocco, McKay and Alcorn commended the former Vienna mayor as “not only an incredible asset to the town, but to Fairfax County as a whole.”

“Her accessibility to Vienna residents, her ability to work with all sides on tough Town issues, and her diligent advocacy for the Town – always with a smile on her face – means she will be a mayor we will all miss,” McKay and Alcorn said.

Alcorn commended DiRocco for advocating the Town of Vienna’s behalf when working with the county on projects like an agreement to increase public parking for Patrick Henry Library and the town’s new police station.

“Towns have this kind of unique setup where we’re reliant on counties for schools and human health services, but we also have this independent side,” DiRocco said. “I greatly appreciate Fairfax County in the ability to provide the support and partnerships we really needed in certain times, but also to honor our independence.”

The resolution acknowledging DiRocco’s work as mayor was followed by a similar proclamation recognizing Herndon Mayor Lisa Merkel, who is not seeking reelection in November.

The Board of Supervisors also presented Del. Vivian Watts (D-39th District) with a Virginia Association of Counties Achievement Award, which recognizes “excellence in local government programs.” Watts received the award for advocating for the Virginia General Assembly to grant counties more taxing authorities.

The public presentations were the first ones delivered by the Board of Supervisors since March, when the board temporarily shifted to electronic meetings due to public health concerns from the COVID-19 pandemic.