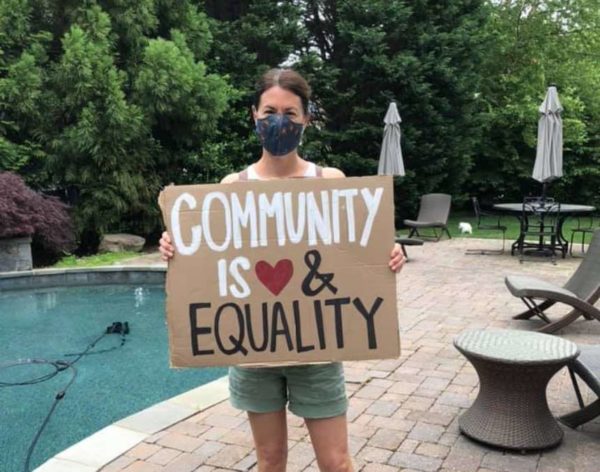 On one of her final days in office, Laurie DiRocco took a moment to reflect on her accomplishments as Vienna’s mayor.

DiRocco was first elected to the Town Council in 2009 and has been the mayor since 2014, according to her town bio. She has lived in the town since 1995.

Going back 20 years, DiRocco said that serving on the Town Council or as mayor wasn’t on her radar when she was working in finance, but decided to run for mayor at the request of her predecessor.

Under her leadership, the town built a brand new community center that met the mark for a LEED Gold Certification, meaning that the center was built keeping in mind the highest standards of energy efficiency and environmental sustainability.

This building was the first in the town to meet such high standards, according to DiRocco.

DiRocco said her focus on sustainability also applies to commuters and pedestrians.

“A big thing for me was walkability. I walk all the time. I love to run and bike and wanted to improve that in the town,” she said.

To encourage exploration of the community and relations with her constitutes, DiRocco would organize Friday morning walks. Each week, people were invited to join her at 9:30 a.m. to take a roughly 3-mile walk — giving them the chance to personally meet DiRocco and check out sites around the town. Roughly 10-20 people would take her up on the offer each week, she said.

“Some people would stop by because they wanted to talk to me in a casual environment,” she said. “But I also had some regulars.”

Thanks to funding from Maud Robinson, a former council member, DiRocco said that the town was able to install miles of sidewalks during her term.

To ease traffic in the town, DiRocco noted that a roundabout at Locust Street SE and Park Street was “wildly successful” in eliminating traffic jams for commuters. “That was a nice little transportation project that I’m proud of,” she said.

DiRococo has been active in the Black Lives Matter rallies around town, posting photos and videos showing community members kneeling in allyship to the Black community on her personal Facebook page.

“I thought they were really powerful,” she said, noting how “peaceful and well thought out” the protests were.

DiRocco said that “there hasn’t been an issue within our police station,” but that nearby localities have had issues with police brutality and racial injustice.

For Vienna specifically, she said that the Town Council began examining how policing happens in Vienna. About five years, the town started work on the conception plans for the upcoming police station.

Though a subject of controversy around town, DiRocco said that the plans for the new station include more involvement from the community to rethink the relationship between police and the community.

“We have an opportunity to make changes,” she said.

Following in DiRocco’s footsteps, Linda Colbert, who was first elected to the Town Council in 2014, is the incoming mayor.

“She has a knowledge base of how things operate,” Di Rocco said. “She really cares about the town, the people and the community. It’s about her love for Vienna, not political purposes.”

The two leaders have already met to talk about the position, according to DiRocco.

DiRocco said she’s confident that Colbert will continue many of the popular traditions, such as the town’s volunteer recognition — which DiRocco said she has expanded upon during her time in office.