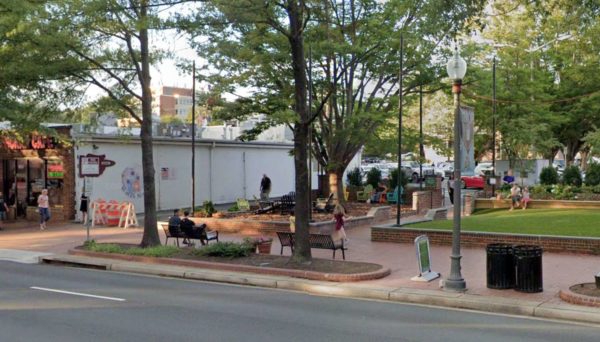 An upcoming mural in the City of Falls Church recently raised concerns from some residents over its selection process.

The mural is set to be installed near Mr. Brown’s Park — a space that was known as the city’s downtown plaza before it was renamed to honor the city’s oldest business.

The Falls Church Planning Commission noted during its meeting last week that the mural will be paid for with public funds. Because it is located on private property, it doesn’t need to go through the typical approval process for publically commissioned art, Melissa Teates, a member of the city’s Planning Commission, said.

The Village Preservation and Improvement Society, a local group that aims to preserve the city’s history and culture, disagreed with this decision though.

VPIS said in a letter to the Planning Commission that the project should go through a stricter screening process because public funds are being used.

The letter insisted that a new set of artists bring forth a proposal to a “qualified board” which will prioritize images celebrating the history and people of Falls Church.

“VPIS requests that city staff suspend the contract and reconsider the public process for selecting the mural content,” the letter said.

In the future, Teates said that the Planning Commission is working on a plan for public art, but it has not been completed yet.