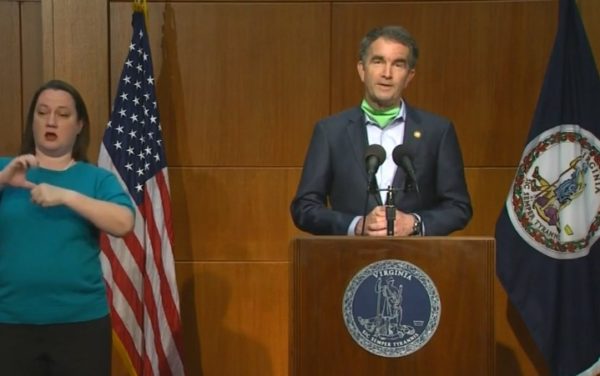 The rest of Virginia has already started the first phase of the state’s reopening plan, but Northern Virginia officials asked for a delay earlier this month, which Northam granted.

Now, Northam is pointing to the latest data on the virus, highlighting that the numbers have been “directionally correct” since Friday (May 22).

“I want to emphasize that while phase 1 loosens some restrictions, it does not require any business or place of worship to open until they are comfortable that they can do so safely,” Northam said. “Just because you can open doesn’t mean that you have to open.”

A joint letter from head officials in Northern Virginia, including Fairfax County, sent to Northam on Monday (May 25) said that they are preparing to start the first phase on Friday, including an assessment from their corresponding health directors.

“[The public health directors] have noted the regional attainment of four of the critical metrics and assessed the need for continued focus on expanding our contact tracing capacity and developing sustainable supplies of PPE,” the letter said.

Additionally, Jeff McKay, the chairman of the Fairfax County Board of Supervisors, released the following statement:

Northern Virginia’s Health Directors tell me that we have met four of the critical criteria required to move forward to Phase I of Governor Northam’s plan to reopen. One of the two areas we don’t meet is contact tracing, but we are finalizing a contract hopefully this week to provide recruitment and staffing for the hundreds of contact tracers and investigators that we will need to increase our capacity of contract tracing. The other is PPE and we have sufficient supply for hospitals, but are working to increase in other areas and hope the Governor will be able to help us do that. My colleagues and I have provided this information to the Governor and look forward to hearing his decision based on that data.

I share our community’s desire to reopen our businesses in the safest way possible. Fairfax County has made significant preparations should the Governor decide that Northern Virginia has met his criteria to reopen this Friday. Regardless, we will continue to monitor our local statistics to ensure Fairfax County doesn’t see spikes in cases and be transparent with the public on our progress.

Northam said that he has been communicating with the Northern Virginia officials.

Northam said that he is “not comfortable” starting the second phase yet for the state and will reevaluate later this week.

Northam also responded to criticisms after photos surfaced of him without a mask at Virginia Beach this weekend, which intensified due to Northam saying on Friday that he planned to announce a statewide mask policy soon.

“People held me accountable, and I appreciate that,” Northam said. “In the future when I am out in the public, I will be better prepared.”

Northam said that “well-wishers” asked to take pictures with him while he was en route to speak to reporters. “I was not prepared because my mask was in the car,” he said.

Starting this Friday (May 29), people age 10 and older will need to wear face-coverings when they are inside a public place, including retailers, barbershops, restaurants, public transportation, government building and place where people congregate. Exceptions include people who are exercising, eating or drinking or have a health condition that makes wearing a face-covering difficult.

“This is a matter of public health,” Northam said.

Image via Governor of Virginia/Facebook