Community leaders and city officials celebrated the start of an infrastructure project located in the heart of an upcoming mixed-use development in the City of Falls Church.

During a keynote address for the groundbreaking today (Monday) ceremony at George Mason High School, Councilmember David Snyder said that this $15.7 million dollar project will create a safer and more economically successful community around the West Falls Church Metro.

The new improvements, according to the City of Falls Church, include:

The money for the project was acquired through the Northern Virginia Department of Transporation.

Infrastructure issues that have been building up over many decades will finally be addressed with this project, Snyder said.

“Twenty years ago this project would not have occurred,” Snyder said. “This is a classic example of the system working.”

The project is still in the “beginning stages,” according to the City of Falls Church website, adding: 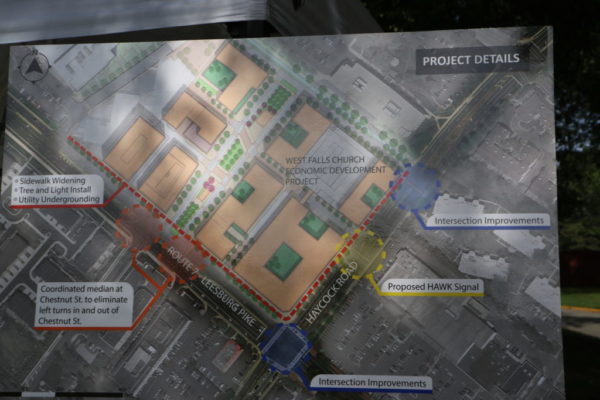 Lindy Hockenberry, who taught at George Mason High School for 30 years, served for eight years on the Falls Church City Council and spent another 11 years on the city’s Planning Commission before retiring, attended the groundbreaking to show support for the project.

“Its been my life dream to replace George Mason,” she said adding that the school has serious infrastructure problems, like leaky ceilings.

The new high school campus is already under construction and is slated to be completed by early 2021.

Until then, the students will remain in the same building, which will eventually be demolished for a new commercial center, similar to the Mosaic District, Hockenberry said.

“This will be truly multi-modal,” Snyder said, adding that this these updates will allow people easier access to the Metro.