Palchik won the nomination for the Providence District seat on the Board of Supervisors, defeating four challengers and pulling ahead of Fairfax County Planning Commissioner Phillip Niedzielski-Eichner by nearly 1,500 votes.

Frank Anderson, the executive director of the Fairfax County Democratic Committee, told Tysons Reporter that he was surprised by how many Democratic candidates flooded the Board of Supervisors races, although the large fundraising sums weren’t unexpected.

“I was surprised by how many candidates decided to jump in,” Anderson said, adding that a race like the one for Providence District supervisor typically has two to three candidates instead of five.

With crowded races, some of the candidates’ clashing resulted in an “acrimonious” primary, Anderson said, adding, “It’s expected to be.”

The race for the board’s chair was particularly divisive — McKay faced an ethics complaint filed by a rival, while the Washington Post endorsement raised concerns about sexism.

On the Democratic Party’s end, Anderson said that the debates “got awkward,” yet the staff focused on staying “as non-partial as we can” and professional. 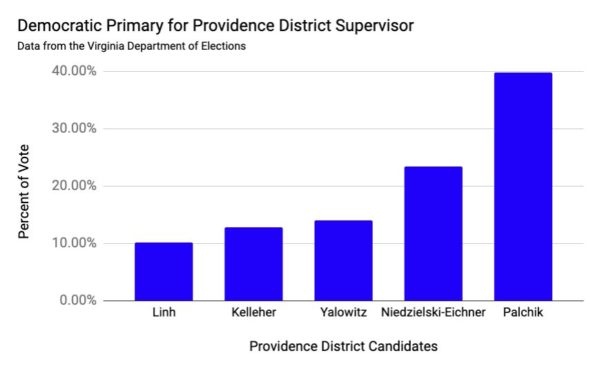 The primary also turned out to be expensive for several candidates.

Niedzielski-Eichner and Palchik both neared the $100,000 fundraising mark in the race for the Democratic nomination.

Every candidate for the Democratic nomination to the chair position raised over $100,000, with developer Tim Chapman raising $952,109.

Anderson said that the high fundraising amounts serve several purposes. Beyond paying for resources like campaign staff, recorded calls, glossy mailers and advertising, they also help to give the impression that a candidate has the backing of more supporters.

“When you donate to a candidate, you do it because you believe in them,” Anderson said. “You can’t know whether your dollar made the difference.”

Anderson said that potential donors can become enticed to give money if they see how much others have donated — essentially equating money with value.

Some candidates in the race received sizable checks, either from donations to themselves or from a few key supporters, like developer Tim Chapman who raised most of his $952,109 by donating to himself in the chair race and Hunter Mill candidate Maggie Parker, who received support from Comstock Companies, her employer.

“Not many voters have the time to see who is donating to the candidates,” Anderson said. 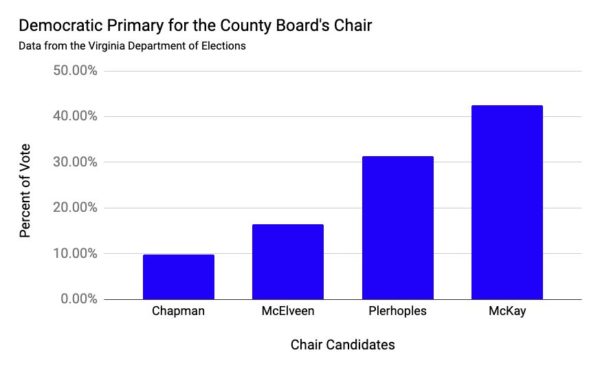 “[Progressives] are being more bold,” Anderson said. “In the past, it was mostly mainstream candidates.”

In a close race, progressive challenger Steve Descano ousted incumbent Raymond Morrogh for the Democratic nomination for the commonwealth’s attorney position in Fairfax.

With the Democratic primary finished, candidates and voters can now look ahead to the Nov. 5 election.