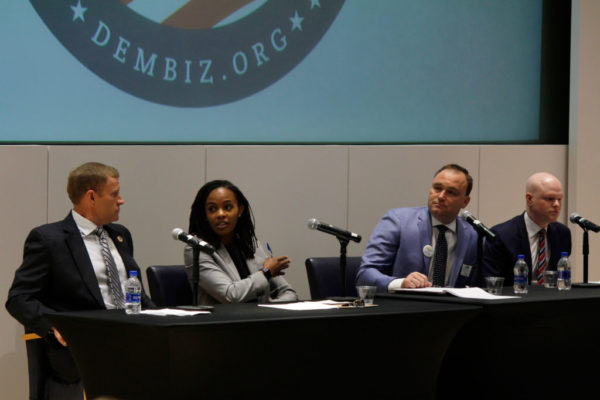 Supervisor Jeff McKay and candidate Timothy Chapman doubled down on a bitter feud at a debate for the Democratic nomination for the Board of Supervisors Chair in Tysons this morning.

The debate at Valo Park (7950 Jones Park Drive) touched on a variety of countywide issues, with Chapman repeatedly slinging attacks at McKay over school spending and Metro expansion.

When the issue of a recent ethics complaint against McKay came up, sparks flew between the candidates, while the other two candidates, School Board member Ryan McElveen and Georgetown law professor Alicia Plerhoples, tried to stay above the fray.

The complaint alleges that McKay purchased a home at a discount from a developer who brought business before the Board of Supervisors — a violation of state ethics law. The question of the ethics violation was raised by moderator Julie Carey, who asked Chapman why his campaign didn’t come forward as the source of the allegation.

“We wanted to confirm allegations were accurate and correct,” Chapman said. “They are… Anybody who understands real estate knows these allegations here are very troubling.”

But McKay fired back that the allegations were false and started as a smear campaign.

“There is zero credibility. The allegations are completely false,” McKay said. “To try to smear me, because you’re not winning a campaign is a Trump maneuver.”

Plerhoples and McElveen centered most of their responses on affordable housing and school overcrowding issues but did reluctantly weigh into the debate when prompted by Carey.

“Whether the ethics complaint has merit or not, public officials have a duty to investigate for public trust,” Plerhoples said. “It doesn’t get suspended because it’s an election year.”

McElveen said the issue is emblematic of a larger problem.

“The supervisor districts have devolved into fiefdoms,” said McElveen. “I would address that at the county level.”

For most of the debate, the four candidates widely agreed that the lack of affordable housing and overcrowding of the schools were two of the biggest problems facing the county. McElveen specifically called out the Fairfax County School Board’s decision not to immediately tackle the McLean High School boundary question.

“We have overcrowding at Marshall and McLean High School,” said McElveen. “Frankly, the School Board has been very political on not taking on that challenge. I say we need to act now.”

The primary will be held on June 11.