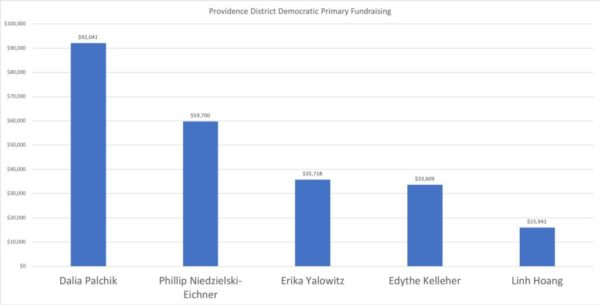 Since July, the Virginia Department of Elections reports that the candidates have raised:

While the campaign finance reports would show Palchik with a substantial fundraising lead, according to the report a $39,450 contribution was made on Jan. 15 from the “Friends of Dalia Palchik” campaign committee.

“As with some other races, I transferred funds I was raising under my prior account to my new account for Supervisor,” Palchik wrote in an email. “This was done after consultation with the Board of Elections as to the best way file my records. Therefore, all funds for my campaign are now under the new account, but the transfer reflects all of my funds raised to date, including those raised prior to Jan 15.”

If the funds shuffled from one campaign committee to another are excluded, Palchik’s fundraising total would be $52,591 — putting her in second place behind Niedzielski-Eichner.

The reports also show campaign contributions from several prominent local Democrats. On Dec. 21, Niedzielski-Eichner received an early Christmas gift from the ‘Friends of Linda Smyth’ — the campaign fund for outgoing Providence District Supervisor Linda Smyth — in the form of a $23,325 contribution.

Palchik has also raked in funding from other Democrats, though, like a $500 contribution from outgoing County Board Chair Sharon Bulova’s election campaign on March 11. Palchik also received funding from Alexandria City Councilman Canek Aguirre.

Kelleher received $500 in support from Mason District Supervisor Penelope Gross. Nearly two-thirds of Kelleher’s fundraising total — $20,000 of the $33,609 total — is from Kelleher.

No incumbent members of the Board of Supervisors show up in Yalowitz’s fundraising tally, but there is a $650 contribution from the local PAC Brass Ovaries and a $200 contribution from former lieutenant governor candidate Gene Rossi, who has recently raised the topic of running for office again in the wake of the scandals in Richmond. Yalowitz has also spent a total of $5,502 on her own campaign.

Hoang trails the other candidates in fundraising. Hoang entered the race late, and “Friends of Linh Hoang” doesn’t report any contributions prior to March 26.

The primary will be held on June 11.