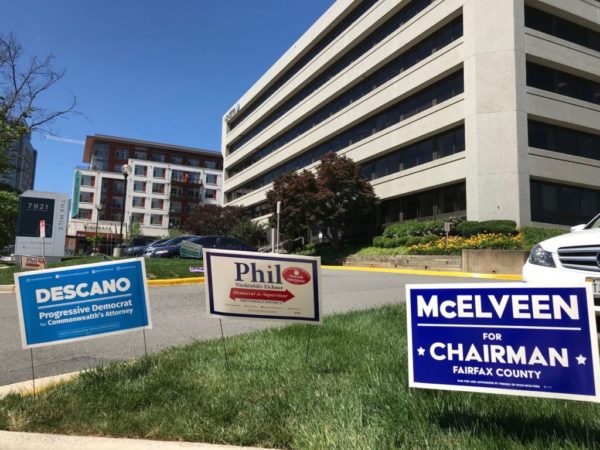 With just a few hours left in polling, Tysons-area polls have shown a slow but steady increase in voting throughout the day, particularly in Hunter Mill.

Competitive primaries are underway for the Democratic endorsement for the Providence District, Hunter Mill District, and chairman seats on the Fairfax County Board of Supervisors.

The voter turnout so far in the Providence District is 6.29 percent. The Hunter Mill District, which includes Vienna, is 7.3 percent and is the highest of any district in Fairfax. The Fairfax County average turnout is 5.36 percent.

This year’s primary, particularly the race for the chariman’s seat, has been particularly divisive. One candidate faced an ethics complaint filed by a rival while the Washington Post endorsement raised concerns about sexism.

It’s also been an expensive primary. Every candidate for the Democratic nomination to the chair position has raised over $100,000, with developer Tim Chapman raising $952,109 — mostly through funds Chapman gave to his own campaign. In Hunter Mill, candidate Maggie Parker sits at $258,225 fundraised, in large part with support from Comstock Companies. Two Providence candidates — Phillip Niedzielski-Eichner and Dalia Palchik — neared the $100,000 fundraising mark

If you’re a Fairfax County voter you have a chance to choose the next Chair of your County Board, some new supervisors & new school board members, and also choose between incumbents for Commonwealth’s Attorney, State Senate and State House or their challengers. Just Vote! pic.twitter.com/AA9rFVAgeA

The Democratic candidates for the Board of Supervisors are:

Any registered voter can participate in the primaries. Polls are open until 7 p.m.

The polls are now open until 7 p.m. for today's primary election. While it's a Democratic primary, every registered voter can participate because in Virginia you don't register to vote by political party. #vote #votejune11 pic.twitter.com/b93Vqw9fPm