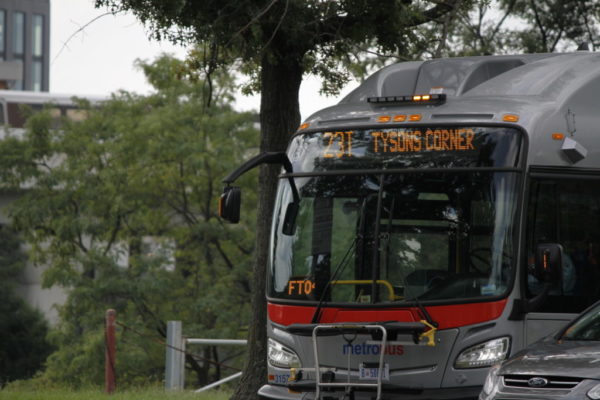 After 32,000 student trips, the free Metrobus pilot program at Justice High School in Falls Church could be expanding to Marshall High School in Tysons.

Students across the county can use the Fairfax Connector and City of Fairfax CUE bus for free, and students account for 1.4 million trips on those buses in less than 4 years, but the passes have not been usable on the Metro system.

Over the last eight months, 35 percent of students at Justice High School have gotten a Metrobus-enabled student bus pass. Students at the school account for 3,500-4,000 trips per month.

Nearly half of the ridership among Justice High School students was on Metrobus Route 28A, which runs along Route 7 from King Street in Alexandria to Tysons.

Of students surveyed as part of the pilot, 70 percent had never ridden a Metrobus to or from school and 52 percent said they would not ride unless it was free. The majority of students said they also wanted to see more routes, extended hours and Metrorail service added.

The top three uses for the pass were traveling home or to activity centers — Tysons specifically — or to an after-school job.

At a Fairfax County Board of Supervisors Transportation Committee meeting on Tuesday (May 14), faculty and students from Justice High School told the committee about their experiences with the program as the committee considered an expansion of the pilot.

A similar pilot program is planned for either Marshall High School, Falls Church High School or Annandale High School in the 2020-2021 school year.

“Students take the bus to the mall and the movies, but they also go to work with it,” Justice High School Principal Maria Eck said. “I met with a student on a totally different topic, but he told me he got a better job because of the bus pass. Now he can find a job he can get transportation to, and he’s going up to Tysons to help his family.”

Staff recommended renewing the agreement with the Washington Metropolitan Area Transit Authority to continue the pilot at Justice High School next year.

“When I first heard about it, I couldn’t believe it,” Carlos Pineda-Lopez, a student at Justice High School, said. “Now, I’m not paying $40 a week for Metro. It’s been amazing. For a family that makes $30,000 with both parents combined, that adds up. Sometimes I couldn’t go to practice or work and that would hurt my family. This bus pass increased my mobility and range of jobs. Now, I can go anywhere in Virginia. That’s how the pass has helped me. It’s helped as a next step towards adulthood.”