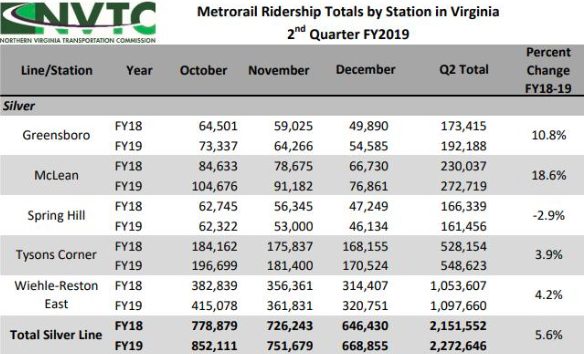 (Updated 9 a.m.) — Metro ridership may be in free fall overall, but at least in the Tysons area ridership is continuing to climb.

Three of the four stations in the Tysons area saw increased ridership in the last few months of 2018 as compared to the year before.

The McLean Metro station saw the largest increase in ridership, rising 18.6 percent over the last year. The station is located close to the Capital One headquarters, which opened late last year.

The Greensboro Metro station, meanwhile, saw an increase of 10.8 percent, while ridership at the Tysons Corner station increased 3.9 percent. The stats, compiled by the Northern Virginia Transportation Commission, compare ridership in October, November and December of 2018 with the same period in 2017.

The Wiehle-Reston East Metro station saw the highest overall ridership among Silver Line-only stations, with over 1 million rides during the three-month period. The station is the furthest point west on the Silver Line.

Stations on the Orange Line did not fare as well. While the West Falls Church Metro station saw a 4.1 percent increase in late 2018 as compared to late 2017, Dunn Loring and the Vienna Metro stations saw a 1.1 and 1.4 percent respective decrease in ridership.

Professor Frank Shafroth, director of the Center for State and Local Leadership at George Mason University, told Tysons Reporter earlier that the high Metro ridership in Tysons is likely a result of the area’s notorious traffic, though car remains the more popular for commutes than Metro.