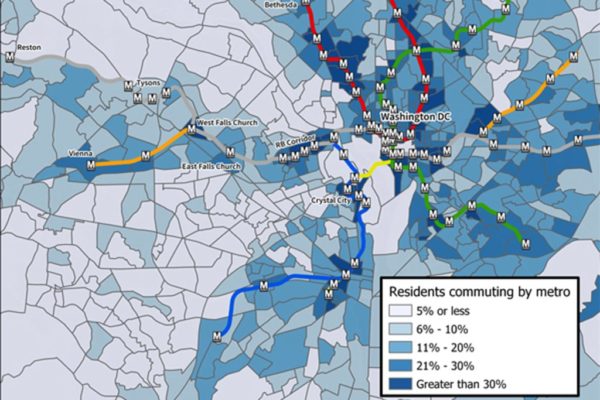 While the Silver Line may be bringing new market tenants to Reston and Tysons, so far it’s had little impact on changing commutes.

According to a new study by JLL, an investment management company, 1.1 million square feet of new office space has emerged in Tysons within a half-mile of a Metrorail station. Rents for higher-end office space on-Metro in Tysons also comes at a 16% premium compared to off-Metro locations.

Further west, Reston has seen a similar impact on office markets. According to the study:

“In the Wiehle micromarket, average Class A rents have increased 30% since 2012, and Reston also saw the delivery of its first Trophy building on-Metro — 1900 Reston Metro Plaza — with asking rents in the $50 p.s.f. range, a rate not seen before in the Toll Road market outside Reston Town Center.”

Like their neighbors in Tysons, Reston residents have been slow to give up their cars. Of commuters, less than 10 percent coming from Reston use the Metro.

More residential developments planned over the next few years near the Metro in both Reston and Tysons which will likely result in a gradually increasing amount of Metro ridership in both locations.

The study also notes that companies moving to and growing in the area, particularly in the tech sector, could also bring more Metro ridership to the area by reverse commuters: people living in Washington, D.C. or Arlington and traveling out to Tysons.