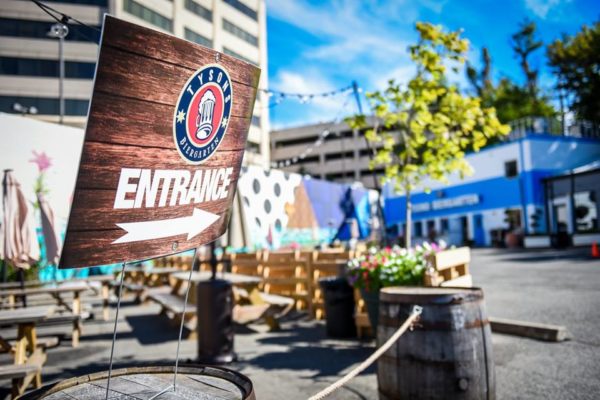 When Tysons Reporter posted polls on Facebook and on our website last week asking whether Tysons was a fun place to go out at night, the answers were… not great for the area.

Only 6.5 percent of responders at the website said Tysons has an active nightlife, though 56.2 percent said it’s starting to get better. While the “getting better” number is encouraging, the overwhelming lack of satisfaction is a sign that Tysons still has some rough spots to work out as it tries to morph into “America’s Next Great City.”

A notable bright spot, according to several Facebook commenters said, was the Tysons Biergarten.

Commenters described the Biergarten as the kind of casual and affordable late-night activities the area needed more of, so we reached out to Biergarten owner Matt Rofougaran to get his thoughts on the current state of local nightlife and how to make it better.

Rofougaran was a managing partner with Washington, D.C. nightlife hotspots like Ultrabar for years and was eager to move that scene to where he grew up: Tysons. But when the Biergarten started two and a half years ago, Rofougaran said there local nightlife scene was scarce.

“There was none,” said Rofougaran. “You had no real place for nightlife unless you wanted to sit in a bar or restaurant, and that’s not everyone’s scene.”

Rofougaran said the late-night locales in the area catered to specific interests, like the now-closed international hookah bar Babalu and Iris Lounge, which catered to an older, wealthier crowd.

“The difference with Tysons Biergarten was we were aiming for all ages,” said Rofougaran. “You can be 21 or you can be 65. That was our main aim and focus.”

Fast forward to today and Rofougaran says the nightlife scene has hardly improved. Tysons Biergarten and the nearby Greenhouse Bistro are two of the only thriving late-night spots in Tysons, but Rofougaran said their popularity is mainly because they’re one of the few options available, not an indicator of market interest for late-night activities.

“A lot of people leave here,” said Rofougaran. “They’re done with their job at 6:30 or 7 p.m. and they go home. They don’t come back. If they want to go out, they go to Arlington. If we had ten places here open late night, all of them would sink. They would all be empty. There isn’t that crowd of people that want to go out at night in Tysons.”

Andrew Taherzadeh, digital communications manager for Fairfax County Economic Development Authority, reiterated that Greenhouse is a popular hub of activity on Friday or Saturday evenings, but that aside he admitted that local late-night entertainment is sparse.

“Currently nightlife in Tysons is minimal,” said Taherzadeh. “That should change in the upcoming years with new development.”

New late-night options are coming in with developments like The Boro, which will also bring with it more housing — crucial for making Tysons a more vibrant place at night and not just a daytime destination for workers. But Rofougaran says nightlife in Tysons faces an uphill battle against the more entrenched establishments in Arlington and the more lax alcohol laws in Washington, D.C.

But like Taherzadeh and 56.2 percent of Tysons Reporter’s readership, Rofougaran said it’s going to get better.

“Tysons is heading that way, it’s just not there yet,” said Rofougaran. “In another five years, it’ll be a different story. It just takes time.”