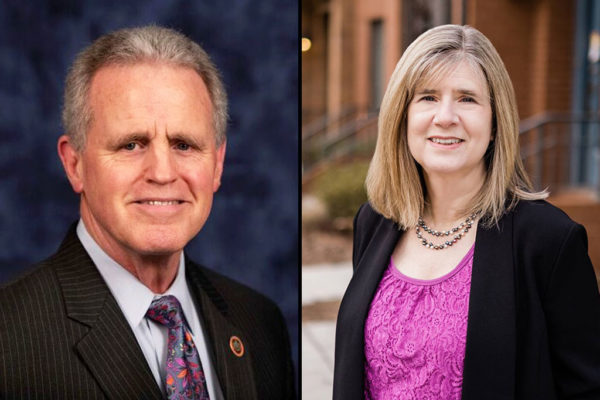 The election to replace Linda Smyth as Providence district supervisor just turned into a four-way race — two veterans of Fairfax government have thrown their hats into the ring for the Democratic primary in June.

This week, Planning Commissioner Phillip Niedzielski-Eichner and former Vienna Town Councilmember Edythe Kelleher both announced that they will be running for the Smyth’s seat. The two join Tysons resident Erika Milena Yalowitz and School Board member Dalia Palchik, who announced last month that they would be running for the seat.

“I love the idea of participating in the defining of a new future for Fairfax,” said Niedzielski-Eichner . “It’s a great time for us to look for the future and make sure we’re on the right track. The second piece is we’ll have five new members and one new chairman. It’s critical we have strong leadership — leadership that I bring to the table based on breadth and depth of experience.”

“The Planning Commission provides the experience in land use and meeting those challenges, that’s the place where you really get an understanding of how land use impacts the county,” said Niedzielski-Eichner. “But the Planning Commission advises, they don’t decide. I want to be in a position to be part of that decision process.”

Kelleher now lives 1.5 miles from where she did in the early 2000s, which shifts her from Vienna to the Providence District.

“A lot of the issues are the same,” said Kelleher. “I worked with a lot of Providence issues. Vienna is surrounded on three sides by the Providence District.”

Tysons’ comprehensive plan is coming up on its 10-year anniversary, and both candidates said it’s time to take another look at the plan.

“We’ve had 10 years of comprehensive plans,” said Niedzielski-Eichner. “I’d like us to get an assessment of where we are in relation [to what was planned].”

Niedzielski-Eichner said looking at the transportation aspect of the plan is going to be particularly critical, particularly in terms of implementing the planned grid of streets.

“[Tysons] has got to be a walking urban center,” said Niedzielski-Eichner. “We need to strengthen our ability to be pedestrian friendly. That means putting public facilities in place for the center to grow around it. ”

“My concern [with the plan] was at the time, and still, has to do with things like recreational space,” said Kelleher. “The original plan did not call for anything other than pocket parks and public plazas. I thought with an area that large, there would be a need for real playing fields. I expressed that and advocated for that, and that was included in the final plan.”

Kelleher noted that traffic issues also tie in with the availability of housing around Tysons. If more mixed-use buildings can be developed at a wider range of prices, Kelleher said more people working in Tysons will be able to live and shop there too, hopefully getting more cars off congested local streets.

Both candidates have said they are hoping to host kick-off events soon, but neither has concrete plans at the moment.