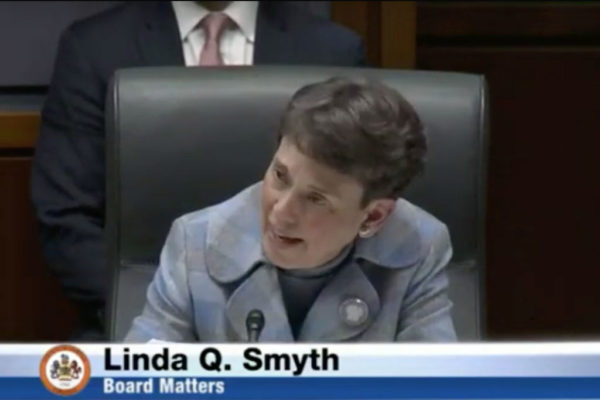 Fairfax Supervisor Linda Smyth, whose Providence district includes Tysons, announced at a Board of Supervisors meeting earlier today (Tuesday) that she will not be running for reelection.

At the meeting, Smyth said she will be retiring next year.

“It’s truly been a pleasure to work with all of you, but this will be my last term in office. I will retire at the end of next year. But, I suspect this will be a busy year in Providence. We may have a lot of land use to finish up, so I am apologizing in advance for everything that may need to get done next year and asking for your patience with all of it.”

Fellow local officials were quick to share their thanks and congratulations to Smyth.

Congratulations to Supervisor Linda Smyth (Providence District) on announcing her retirement at today’s Board meeting. Thank you for your years of dedication and service to Fairfax County.

Supervisor Smyth has been a valued colleague on the Board of Supervisors. Her meticulous work on land use and transportation issues have resulted in tremendous progress to revitalization & redevelopment areas of the county such as Tysons and Merrifield. https://t.co/fDR1LLrzGQ

Smyth was elected in 2003, then reelected in 2007 and 2011. Smyth’s district includes Tysons and Merrifield, both of which have seen substantial development since she was first elected.

Smyth’s announcement is part of a shakeup on the Board of Supervisors. Supervisor John Cook (R) from the Braddock District announced that he would not be running for election again.

The Washington Post reports that Board of Supervisors Chairwoman Sharon Bulova (D) and Hunter Mill’s Supervisor Catherine Hudgins (D) are also deciding whether or not to run again. The Hunter Mill district includes Vienna and Reston.