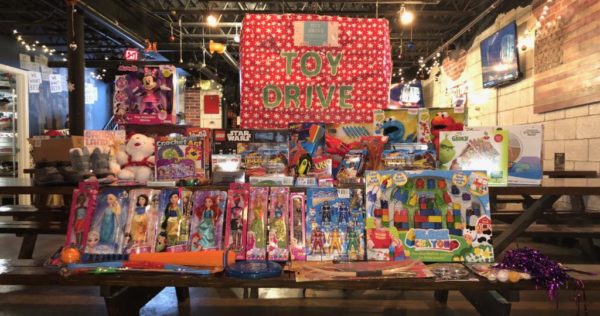 (Updated 3:30) There’s lots of new development around Tysons, but one of the more unusual is a series of residential buildings constructed last night inside the Tysons Biergarten, made entirely from gingerbread.

The Tysons Biergarten is normally a pretty adult-oriented place, one of the few hotspots of the local nightlife, but yesterday (Wednesday) evening the Biergarten toned down the “bier” part and hosted its 3rd annual toy drive for local youth shelter Second Story. The event included gingerbread house making with youth involved with Second Story and a visit by Santa.

The event was the culmination of a month of toy collection at the Biergarten, where over fifty toys were collected. An earlier fundraiser for the organization raised $500.

Second Story, formerly known as Alternative House, is a youth services and safe shelter near Tysons that was founded in 1972.

The shelter offers a variety of programs, from caring for infants and young mothers to helping teenagers and young adults in distress, and offers a crisis shelter for teens for up to three weeks at a time. It also provides counseling for anyone in need across any of the shelter’s programsand offers longer-term support programs, like rent assistance and help with applications and training.

Abigail Brougher, a communications specialist for Second Story, said the Tysons Biergarten event, along with toy drives hosted by the Tysons Partnership and Tysons Corner Center, mean the shelter will be able to make sure every child and youth involved with the program is able to get a Christmas present.

“Second Story is so thankful for relationships in Tysons,” said Brougher. “It’s important to us to be able to give out toys at Christmas and they are all donated.”

Brougher said there’s no total tally of toys and funds raised yet, and it won’t be counted until after the holiday season, but roughly speaking the shelter has received hundreds of toys.

“Our two objectives are providing safe havens and opportunities,” said Brougher. “The opportunity to have that Christmas experience is important to us.”

While it’s a little late in the year to still give toys, Brougher said there’s still plenty that Tysonians can do to support the shelter year-round. Tysons Corner Center is also still collecting toys until Monday, Dec. 24, at the Santa HQ outside the Nordstrom.

“The biggest thing is to get involved,” said Brougher. “We have tours once a month. That is a really important way to learn about Second Story. We hold them on the second Tuesday of the month and you can sign up online. You get to tour our teen shelter, see where young people are staying, and learn more.”

For those looking to learn more about the shelter but can’t make it out for a tour, Brougher said Second Story also recently finished the first season of its podcast, which interviews people who went through the program.

“We have so much support from the Tysons community,” said Brougher. “They’re a huge part of us being able to do what we do.”