Tysons is getting too big for just one fire station.

The Fairfax Fire and Rescue Department is planning on constructing a new fire station to cover the growing Tysons East neighborhood.

Laurie Stone, planning section manager for Fairfax County Fire and Rescue, said the station is currently in the design process.

Stone said the fire station is being designed and constructed by Cityline Partners LLC, the company backing the Scotts Run Station South development. Cityline agreed to build the new station in exchange for winning permission to construct the new mixed-use development adjacent to the McLean Metro station.

“The Scotts Run Fire and Rescue Station 44 is proposed to be a two-level, three-bay free standing fire station located on Old Meadow Lane,” Stone wrote in an email. “Cityline will substantially complete the fire station and deliver it to Fairfax County by December 31, 2020.”

According to the staff report, a new athletic field will also be built adjacent to the planned fire station to be opened within three years of the fire station opening. 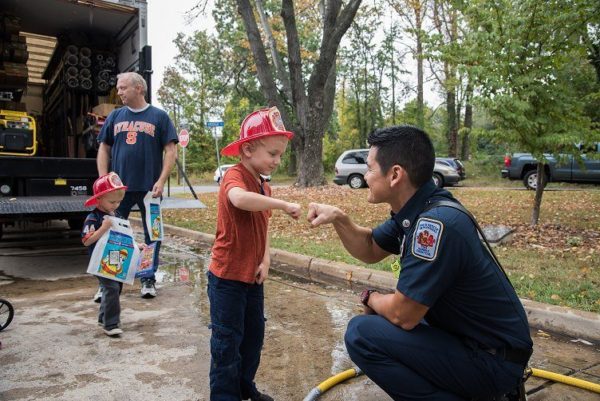 To mark Fire Prevention Week, fire stations all across Fairfax County will be opening their doors to the public this weekend.

From 10 a.m.-4 p.m. on Saturday, Oct. 13, every fire station in Fairfax will be open, with members of the public invited to meet firefighters, see the fire trucks, participate in activities and learn about fire safety.

Fire stations inside our coverage area include:

For those in Tysons, it will also be a chance to wish your local Fire Station 29 a happy 40th birthday.

A map of all Fairfax County fire stations is available online.

Hopefully, the firefighters of Station 29 will never have to use their familiarity with new high-rise buildings across Tysons. But just in case, the crew has been spending the last few weeks exploring the unfinished interiors of Tysons’ tallest structures.

Captain David Bentley from Station 29 said it’s useful for firefighters to take a look inside the buildings before the drywall and the finishing touches are added to see how the buildings are structured and to understand the layout.

“If there’s an emergency, when it’s finished or during construction, this way it will be easier for us to get to patients,” said Bentley. “We need to know how the floors are made, what the ceiling looks like, and what’s between the drywall.”

At The Boro, for example, Bentley said they’re using aluminum studs in the walls while many smaller construction projects use wood. While wood burns when exposed to direct flame, or can smolder and fail over time, Bentley said aluminum studs fail quicker because they start to warp when exposed to intense heat. Bentley said information like that helps firefighters understand how much time they have to continue working to extinguish a fire safely or rescue people from the building.

One of the most interesting buildings Bentley said they visited was the new 31-story Capital One tower, the tallest building in the greater Washington area.

“It’s an absolutely amazing building,” said Bentley. “The sheer number of people working there, elevators, and security, it’s all absolutely amazing… Some of these bigger [buildings have fire pumps that run up to the top floor, and the size and amount of these pumps are quite large and they have to have a backup in case they fail. They have five massive diesel generators the size of cruise ship engines to keep the place running.”

One of the unique features of the new Capital One building is a fire suppression device that rolls over the escalators like a conveyer belt and seals them off, which both stops the fire from spreading to higher floors but also cuts off a route of ingress or egress for those needing to get to or away from the fire.

“I’ve never seen that before,” said Bentley. “It would definitely cut off a route, whether we need to go up or down, but it’s meant to stop vertical fire spreads. There are plenty of other exits in that building and I’m sure security has pre-plans, but that’s definitely a unique challenge.”

Bentley said the sheer verticality of these buildings presents a challenge as well. While Bentley says firefighters can respond to most emergencies in downtown Tysons in five minutes, getting the right equipment to the right floor can take twice as long. Once inside, maneuvering around the building in an emergency situation can be difficult as well, as evidenced by the dramatic rescue via construction crane last month.

“We practice a lot,” said Bentley. “We have drills once a week on high-rise operations. We assign people on different apparatus to different tasks. Paramedics will grab one length of hose to take to the fire floor. The firefighter on the right side of the engine will grab another section of hose. I’ll grab the officer’s bag, which has tools to hook into pipes. This way we can take any hose down any hallway to get to the fire.”

Bentley said the firefighters also travelled to low rise buildings, like Cava and Honeygrow in Pike 7 Plaza, to familiarize crews with the new small developments he says are popping up all over.

On Sunday (Sept. 23) past and present members of the Station 29 crew met to share stories and celebrate the station’s 40th anniversary.

Those that work at Fire Station 29 say the station is unique in the types of challenges it faces. Other stations cover more rural parts of Fairfax County. The Reston and Bailey’s Crossroads both have to contend with high rises. But according to Captain Michael Whetsell, Commander of Fire Station 29, only the Tysons station has to contend with every type of emergency on the books.

“Tysons is a unique location,” said Whetsell. “You have a mixture of all kinds here. We have high rises and residential. You can go left and we have non-hydrant areas. We have the Metro coming through. Every operations manual operates out of Station 29.”

Despite the dramatic increase in density and population in Tysons, Fire Station 29 has not grown except for a county-wide increase from three to four personnel per fire engine or ladder truck. Whetsell says there are ten personnel total on call at the station at any given time.

The main engine receives between 10-15 calls per day, and Whetsell said the medic unit receives about the same. The fire truck responds to roughly ten calls each day.

Whetsell said most of the calls that come in are medical emergencies, accidents or fire alarms. The crew of Station 29 is also regularly called out to Route 7, the Beltway, and the Dulles Toll Road to deal with car accidents.

It’s a difficult job, and Whetsell said the continued development is only making it harder.

“It’s a very busy station,” said Whetsell. “Every day it gets harder and harder due to traffic increases. There’s increased people coming in to work and live, and now the new construction is commercial and residential high rises.”

Whetsell said high rises can be a particularly challenging call for a fire department. With the rapid pace of construction, the department has had to make an increasing amount of high angle rescues.

There is some relief in sight for Fire Station 29. Fairfax County Fire and Rescue is planning on constructing a new station, Tysons East Fire and Rescue Station 44, on Old Meadow Lane. The station will have 23 personnel with additional staffing planned as part of a five-year safety plan.

Delivery of the station is scheduled for Dec. 31, 2020, but as of the fiscal year 2019 Fairfax County government’s Capital Improvement Plan funding for the project is still to be determined.

Whetsell said the new fire station would cover calls in the eastern section of Tysons, also covering Route 123 and the Beltway.

While the usual job of the fire crew is responding to emergencies, Whetsell said he also loves getting a chance to meet with members of the public at events.

“We like getting out to the public,” said Whetsell. “So if anyone has an event to invite us to, get in touch and we’d love to show the fire trucks. We do a lot of birthdays. Just seeing the smiles of kids when we show up… the smiles are priceless.”