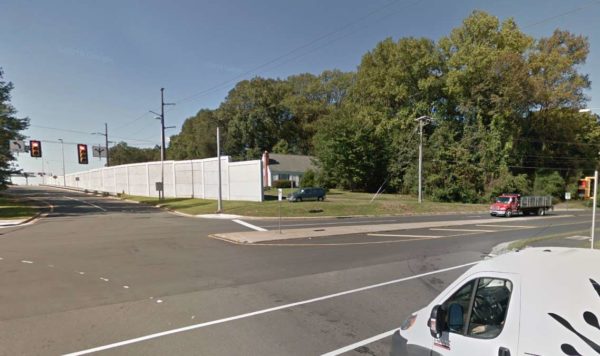 Land along the Dulles Toll Road may get developed into a residential community for people ages 60 and older.

“The affordable dwelling units comprise 15% of the total number of units,” according to county documents.

According to county documents, the development would include:

The community would have a villa-style architectural design with a “slightly more contemporary with a flat roof,” the documents say. The land currently has several aging single-family homes.

“The Applicant believes that this community will appeal to residents in McLean and the surrounding area who are seeking to downsize and enjoy less maintenance of their homes while continuing to live in the community,” according to the documents.

A Fairfax County Planning Commission hearing on the proposal is tentatively slated for June 10. 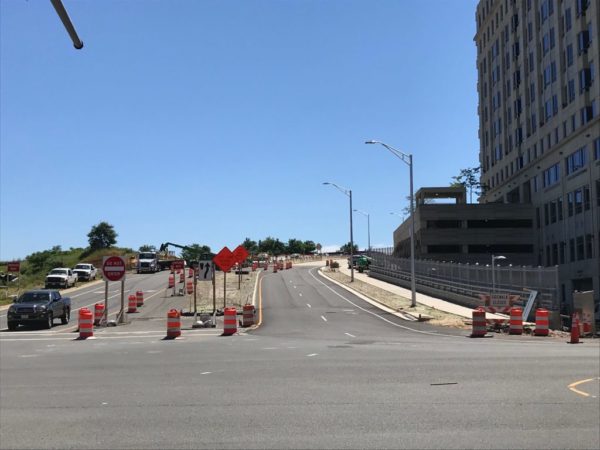 As work continues on the Jones Branch Connector project, drivers can expect nightly closures on and around the bridge this week.

Additionally, Scotts Crossing Road closures between Jones Branch Drive and the I-495 Express Lanes will be closed during those times as well. 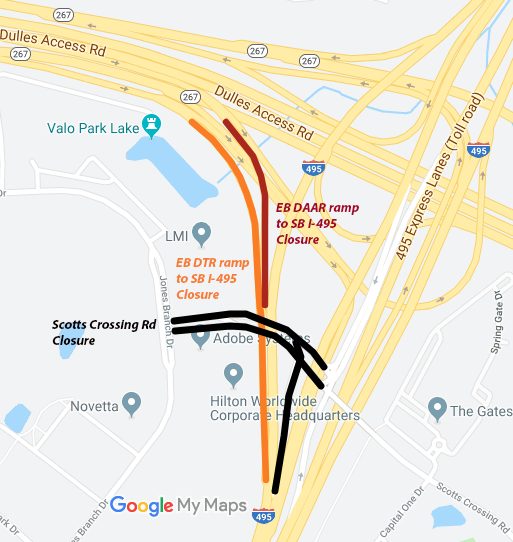 The closure will let workers continue work on the bridge, which is part of the $60 million project to relieve traffic along Route 123 at the I-495 interchange.

The entire project is slated to finish this fall.

Fairfax County’s Board of Supervisors greenlighted funding for new streets and highway improvement projects in the Tysons area.

In total, the county’s board approved $55 million for transportation projects in Tysons and Reston today (June 4), with more than $51 million for Tysons-area roads.

The board also approved funding for preliminary engineering and feasibility studies:

Fairfax County originally approved endorsement of the I-66 median widening in March 2017. The cost estimate for the project, however, increased by $17,500,000 “due to [the] complexity of construction (e.g. shutting down lanes to install the center pier, number of detours, which creates a larger project footprint),” according to the county staff report.

The street improvements would span Nutley Street to Vaden Drive by the Vienna/Fairfax-GMU Metro station, completing missing portions of bike and pedestrian areas. “This project will allow more commuters to make trips by biking, walking, and transit instead of driving, which will improve mobility not only on I-66, but also on the parallel facilities of Lee Highway and Route 50,” the staff report says.

Fairfax County staff want the $7 million for a partial land acquisition between I-495 and I-66 once the design work is done. After deciding to replace an existing gas line along Leesburg Pike, the Fairfax County Department of Transportation has been studying right-of-way and road alignment needs for this section of the highway that runs along the southern edge of Pimmit Hills.

Envisioned in the future Tysons Grid of Streets, State Street would connect Greensboro Drive to Route 7 between Spring Hill Road and Westpark Drive.

Currently, the desired, vacant property is for sale, according to the staff report. “If the property is sold to another party and the existing building encumbered with a long-term lease, the cost of acquiring the property will increase significantly, and may become prohibitive,” the report says.

The Greensboro and Tysons West Park Transit Center ramps to the Dulles Toll Road are two of the three planned ramps that will provide a connection between downtown Tysons to the highway.

Another new road — Broad Street — would run parallel to Route 7, providing access between Spring Hill and Tyco roads and offering an alternative to using Route 7.

The board also approved $3 million for construction to widen Telegraph Road at Hayfield Road in Alexandria and $500,000 for preliminary engineering and feasibility studies on improving the intersection of Reston Parkway and Baron Cameron Avenue.

The funding adjustments from the Tysons and Reston Transportation Service Districts and the Tysons Grid of Streets Road Fund will be made as part of the carryover review for fiscal year 2019, according to a staff report. 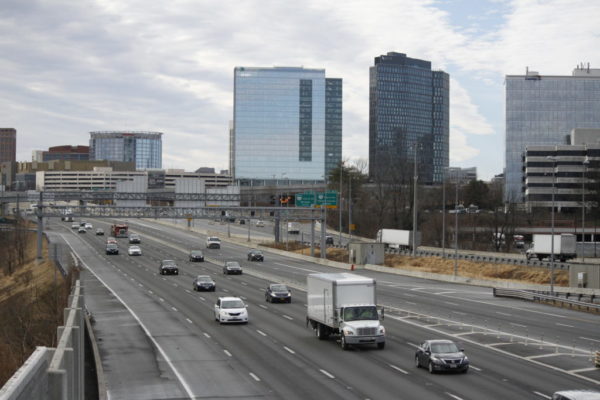 Several new streets and major improvements to existing ones are in the works for Tysons.

The Fairfax County Board of Supervisors made a small adjustment on Tuesday (March 19) to make developers pay a little more of their share, but the report offers a glimpse at what’s ahead for local roadways.

With no discussion, the Board voted unanimously to approve a 1.9 percent increase in the developer contribution rate to the Road Fund and approval of guidelines for those funds’ usage in Centreville and Tysons.

“One of the principles of the Comprehensive Plan for each of the road fund areas is that development above the baseline level established in the plan may be approved, if developer mitigates the impact of such increased density or intensity by contributing to a fund for the provision of off-site road improvements,” staff said in a report. “All aforementioned road funds function in this manner.”

The staff report also included a list of transportation projects either underway or in planning for Tysons’ streets.

Many of the new streets listed in the report are centered around the areas northeast of Tysons Galleria and in Tysons East, the points at either end of the Jones Branch Connector and both planned sites for major redevelopment. 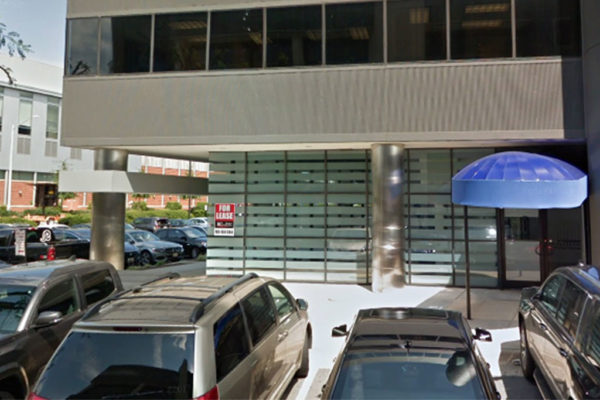 Davita Dialysis is bringing a new kidney care facility near the Dulles Toll Road in Vienna.

Davita signed a lease back in December for a 4,008-square-foot space at 8605 Westwood Center Drive, according to Renaud Consulting, a commercial real estate company.

The spot is near the intersection of Leesburg Pike and the Dulles Toll Road.

An opening date for the Vienna facility has not been announced yet.

Dominion Energy is rebuilding its substation in Tysons, but will have to design the project around a long-planned ramp connecting downtown Tysons to the Dulles Toll Road.

At a Planning Commission meeting on Feb. 27, the Commission ultimately deferred a decision on the substation to March 13 to address technical details related to the site’s exterior. But while the substation itself is probably of little interest to most Tysonians, if they even spot it behind the dense tree-cover, the conversation at the meeting included plans on building around the station to construct a new connection from Tysons to the Dulles Toll Road.

The “Greensboro Drive Connection” is a proposed ramp that would bypass the substation and connect Tyco Road to the parallel Dulles Toll Road. The new route would include a direct extension to Greensboro Drive, ending west of The Rotunda and just north of The Boro development.

While the project is seen as less costly than other connectivity alternatives and would function as a fairly conventional exit/entrance ramp, county staff also noted that the ramp could potentially load large amounts of traffic onto Tyco Road and would not be bicycle or pedestrian friendly.

During the Planning Commission meeting, staff noted that the potential ramp could be located on either side of the station, though they would closely abut the station.

If the project does move forward, construction likely wouldn’t start until FY 2028.

According to Sheri Aiken, senior land use planner for McGuire Woods, LLC (which is representing Dominion) the existing substation has been in place since the early 1960s but requires an upgrade to handle increased demand from Tysons. Aiken said the rebuilt station will utilize GIS equipment and have an overall more efficient and less cluttered look. The chain link fence around the project is also planned to be replaced with a 12-foot wall.

“This station is critical to the future of Tysons and to the effort put forward by Dominion Energy to work with undergrounding of the line,” said Planning Commission member Phillip Niedzielski-Eichner, who represents the Providence district.

Starting Jan. 1, prices are scheduled to go up for those driving on the Dulles Toll Road.

The cost to passenger vehicles will increase from $2.50 to $3.25 at the main toll plaza and from $1 to $1.50 on ramps, according to the Metropolitan Washington Airports Authority (MWAA).

The toll road is operated and maintained by the MWAA.  The toll increases were approved in November to help finance the further expansion of the Silver Line’s Phase 2 development.

The Silver Line’s expansion is financed by a combination of toll-road revenues, airport contributions and federal, state and local government appropriations.

The new rate increases are the first since 2014. But the increase has also drawn opposition from groups like airport workers union UNITE HERE Local 23, which says the cost of the Silver Line should be pushed onto airlines rather than commuters. 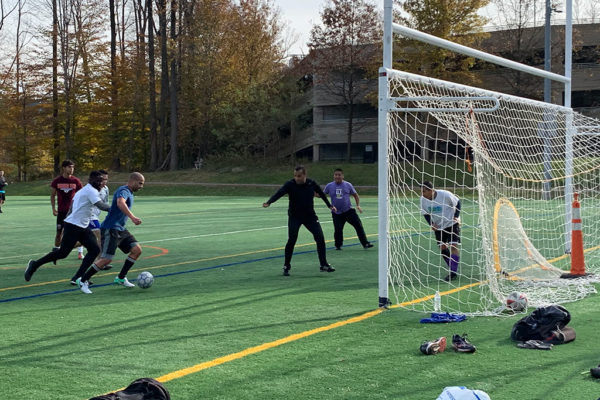 ‘Fish Taco’ Coming to Boro in Tysons — “Fish Taco, a fast-casual Mexican restaurant with three locations in Maryland, plans to open its first Virginia store at the Boro development in Tysons… by June next year. A rep for Fish Taco tells Eater the new location in the mixed-use development will have space for 60 customers to consume taco platters, salads, rice bowls, burritos, and quesadillas — all utilizing local and seasonal ingredients.” [Eater]

Mall Hours for Black Friday — “Tysons Corner Center… will be open for 28 hours straight. This year, the mall opens at 6 p.m. Thursday, Nov. 22 and will remain open Friday, Nov. 23 from midnight-10 p.m. Across Chain Bridge Road, Tysons Galleria will be closed on Thanksgiving. On Black Friday, hours will be 8 a.m.-9 p.m.” [Patch]

Dulles Toll Road Rates Going Up — “The Metropolitan Washington Airports Authority board of directors voted Nov. 14 to increase rates on the toll road again, starting this coming January. Drivers of two-axle vehicles, who now pay $2.50 at the main toll plaza, will see that rate jump to $3.25, and those entering or exiting tolled ramps will pay $1.50, up  from the current $1.” [InsideNova]

Herndon Site Still in the Running for Apple — Though Apple is “seriously” looking at a site in Tysons for a large new East Coast office, the company is also eyeing some other locations, like the 26-acre, state-owned Center for Innovative Technology in Herndon and sites in Raleigh, N.C. and Atlanta, Georgia. [Washington Business Journal]

McLean Blood Drive Was a Success — “With the holiday season quickly approaching, hospitals are continuously using blood products faster than donations are replacing them. With an urgent blood drive, sponsored by McLean Dermatology and Skin Care Center, volunteers and staff aimed to reach a goal of getting 40 donors during this Sunday’s drive — in which the goal was met.” [WJLA]