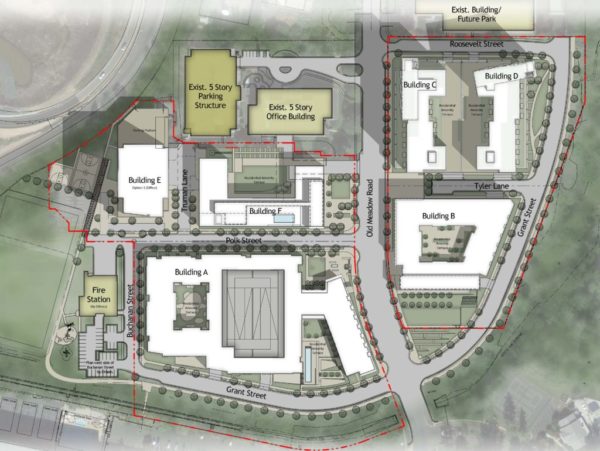 (Updated on 12/8/2021) Construction is now underway at the sprawling Highland District from developer MRP Realty, which is planned to add 1.8 million square feet of residential, retail and office space on a 17-acre site straddling Old Meadow Road.

The new development is just east of the Beltway and south of Route 123, near the McLean Metro station.

Along with the Scotts Run developments, the Highland District is one of the large projects planned to replace the 1970s-era office buildings in Tysons East with new mixed-use developments.

The developer is kicking off the project with work on “Highlands B,” one of two buildings planned as the start of the new development. The buildings will be located on either side of Old Meadow Road at the southern end of the development. Building B is planned to offer 210 residential units and 7,000 square feet of retail on the ground floor.

Across the street, the mid-rise “Building A” is planned to have 410 residential units and 5,000 square feet of retail.

Plans for the development also include a spread of eight public parks throughout the Highland District, from urban plazas to smaller pocket parks.

The largest of the parks will take a small existing field and convert it into a full athletic field with an adjoining sports court, child play area and a dog park. The athletic field, which will be owned and operated by the Fairfax County Park Authority, will have synthetic turf and will be lit.